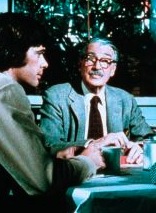 
Born on this day (September 23) in 1897, a 75-year-old Walter Pidgeon drew upon a lifetime on stage and screen to bring a touch of class to debuting director Bruce Geller's otherwise disappointing made-in-B.C. crime comedy, Harry in Your Pocket (1973).

Saturday, August 21, 1973.
HARRY IN YOUR POCKET. Written by James David Buchanan and Lou Austin. Music by Lalo Schifrin. Produced and directed by Bruce Geller. Runing time: 103 minutes. General entertainment. SHE WASN'T MUCH HELP to stranded vacationers, but, labour troubles notwithstanding, there was at least one B.C. Ferry holding to a schedule this past weekend. She was the Queen of Victoria, and she's seen with clockwork regularity sailing across the screen of the Coronet Theatre.
The Queen, along with parts of downtown Seattle, Victoria and Salt Lake City, was a location used last summer in the making of Harry in Your Pocket. For local filmgoers, stargazing against familiar backdrops (such as the ferry, Bastion Square and the Empress Hotel) will probably be the most entertaining part of the picture.
Overall, though, the movie is disappointingly superficial. A look at the colourful world of professional pickpockets, it is the first feature film project for producer/director Bruce Geller, creator of two successful television series, Mannix and Mission: Impossible.
Pickpockets should have been a good choice. With the exception of the 1968 musical Oliver!,  the last film that I can remember featuring them was made more than 20 years ago (Edgar G. Ulmer's B-budget  comedy, 1951's St. Benny the Dip). Unlike spying, pickpocketing has not suffered from cinematic overexposure.
Geller has an intense fascination with digitally dexterous dips, so much so that his film is completely caught up in its own background. Like a formula Mission: Impossible episode, Harry is a movie more interested in process than people.
The result is a film about pickpocketing, rather than about people who are pickpockets.
It begins with the formatlon of a "wire mob" (Geller's script, by James David Buchanan and Lou Austin, glories in its use of authentic terminology), an expert pickpocketing team.
In charge is Harry (James Coburn), the master craftsman, or "cannon," who actually makes "the dip."
Supporting him are Casey (Walter Pidgeon), an older cannon who's lost his delicate touch, but not his eye to spot a victim. Participating in the actual robbery process are a pair of distracting "stalls," Ray (Michael Sarrazin) and Sandy (Trish Van Devere), who use various ploys to keep the victim's attention away from Harry.
It's not bad, as as far as it goes. The problem is that, well, that's as far as it goes. There's hardly any plot beyond the game and play of purse pinching.
The relationship between Ray and Sandy is not to be believed.  They are introduced as separate singles in the Seattle railroad  station. She watches him with a certain fascination as he bumbles  about the waiting room, fumbling one petty theft after another.
Finally, he tries to steal her watch, nearly breaking her wrist in the process. While she's chasing him for the watch, someone else steals her purse and luggage.
So, naturally, she cancels her previous plans and teams up with him, a girl apparently without a past and a boy obviously too dumb to have any future.
The wire mob rookies, of course, are a problem for the pros. Ray brings out the father in Casey. Sandy easily finds the lecher in Harry.
It hardly matters, though. The basic characters are too thinly drawn to make any real dramatic sense.
Originally, the film was titled Harry Never Holds, a reference to Harry's first rule of survival, his practice of passing on a stolen wallet within seconds of its theft. The title change (to Harry in Your Pocket) reflects the picture's bias in favour of procedures rather than persons.
It left me as cold as James Coburn's dental enamel.

Afterword: The above notice was published on the fifth day of 1973's six-day strike by B.C. ferry workers, making the reference to the Queen of Victoria timely. For the picture's other Canadian co-star, Michael Sarrazin, Harry in Your Pocket represented his second working visit to B.C. The Quebec City-born actor had spent the summer of 1971 on location in Vancouver for the thriller The Groundstar Conspiracy, a landmark moment in B.C.'s development as a centre for science-fiction filmmaking. The financial failure of Harry in Your Pocket was a particular disappointment for producer Bruce Geller. Despite a successful career as a television writer and series creator, the native New Yorker hoped to make the jump into feature film directing. Harry in Your Pocket remains his single big-screen credit. He could take comfort, though, in the seven-season run of his Emmy-winning Mission: Impossible (1966-1973), and eight seasons of Mannix (1967-1975). A private pilot, Geller died in 1978 at the age of 47 in a small-plane crash. He missed seeing his legacy hit turned into a major movie franchise, when the first of the Tom Cruise Mission: Impossible features was released in 1996.

See also: During a 1973 visit to Vancouver promoting Harry in Your Pocket, Canadian-born actor Walter Pidgeon sat down with me to discuss five decades in film, working with John Ford and returning home to make movies.