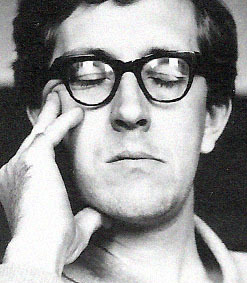 Documentary director and reality television pioneer ALLAN KING in a photo taken circa 1969.


In 1970, director Allan King returned to his University of B.C. alma mater to give a talk on the evolving art of the documentary and his new film A Married Couple. In our subsequent interview, King, born on this day (February 6) in 1930, revealed plans for a controversial new project.

THE WHOLE NOTION of objective documentary films is a myth, says Allan King. The Vancouver-born director was speaking to a University of British Columbia audience last week. [1970]
Like any other type of movie, documentaries give you the world-view of the filmmaker, he said. King, an avuncular figure with a relaxed manner, was on campus to talk about the making of his latest film, A Married Couple, currently on view in Vancouver.
Like his previous project, 1967’s Warrendale, the new film makes use of the live-in camera technique. In this case, his crew moved in with a suburban Toronto couple, Billy and Antoinette Edwards, and began recording the details of their home life.
The result, King told his UBC audience, is a dramatic film about people, using the actual people. The film is about the appalling and tragic way that people miss each other, he said, describing his couple’s habit of talking past one another.
His technique emphasizes shooting and editing, rather than scripting. The emotionally charged moments that give form to the picture had to be carved from a mountain of minutiae.
Is his film a true portrait of the Edwards family?
According to King, this most frequently asked question is really a non-question. A Married Couple can’t hope to be a true and comprehensive picture because it is only 97 minutes long.
The picture that emerges has a dramatic form that so-called real life seldom approaches, and the form represents the filmmaker’s attempt to make his material work as a motion picture.
King dismisses as irrelevant charges that his omnipresent camera radically altered the situation he set out to portray. The camera neither judges nor interferes, he said. It cannot create feelings.
What it does is put people on stage, and allow their real feelings to develop more fully. “What emerges is theirs.”
Next on King’s agenda is a look at teenage drug culture. He is already hard at work researching the myriad legal, social and ethical problems involved, he said in an interview following his talk.
“The cliche says that drugs are not the issue; it is really a search for an alternate reality that people will find more acceptable.” It’s the human element that fascinates King.
He plans to start production just as soon as he finds a couple of people that he wants to make a film about.
Allan King, the unpretentious Canadian who quietly created his own movie form, has the look of a shaggy Walt Disney. His film projects, however, are strictly adult entertainment.

The above is a restored version of a Vancouver Express interview by Michael Walsh originally published in 1970. For additional information on this archived material, please visit my FAQ.

Afterword: In my review of A Married Couple, I called the film “an urban true-life adventure," a reference to the influential series of nature documentaries that Walt Disney produced between 1948 and 1960. As it turned out, Allan King’s subsequent feature, 1973’s Come On Children, was his unique take on The Mickey Mouse Club. After talking with some 400 Toronto-area teens, King found 10 people — five boys and five girls between the ages of 13 and 19 —that he wanted to make a film about. In a departure from past practice, he moved the group out of their homes and into a rural Newcastle, Ontario farmhouse for the 10-week shoot. For the teens it was an opportunity to live free of supervision and responsibility. The filmmakers, of course, were on hand throughout to record the evolving community’s interactions and drug use.
Though ultimately influential — Simon Fraser University media professor Zoë Druick has championed King as “the grandfather of Reality TV” — the 92-minute documentary was not a hit. Thereafter, its 43-year-old director set off on a new career path in TV drama. In 1974, King’s first made-for-TV movie went to air. Red Emma, based on Carol Bolt’s stage play, told the story of Emma Goldman’s emergence as a political force in the 1890s. His first theatrical feature, 1977’s Who Has Seen the Wind, was adapted for the screen from the W.O. Mitchell novel by King’s then-wife Patricia Watson. It was followed by two socially-conscious TV movies, playwright Rick Salutin’s Maria (1977) and Carol Bolt’s One Night Stand (1978). Although King’s second theatrical feature, 1981’s The Silence of the North, received nine Genie Award nominations, fewer big screen projects were being realized in Canada. After the release of The Last Season (1986) and Termini Station (1989), his creative career was in television, directing episodes of such series as Danger Bay, Avonlea and Kung Fu: The Legend Continues.
King died in June 2009 at the age of 79. Fifteen months later, the pretigious DVD publisher Criterion released The Actuality Dramas of Allan King, a five-disc set that includes Warrendale, A Married Couple and Come On Children, as well as the documentaries Dying at Grace (2003) and Memory for Max, Claire, Ida and Company (2005). “Canadian director Allan King is one of cinema’s best-kept secrets,” the publisher notes on its website. Quite so.