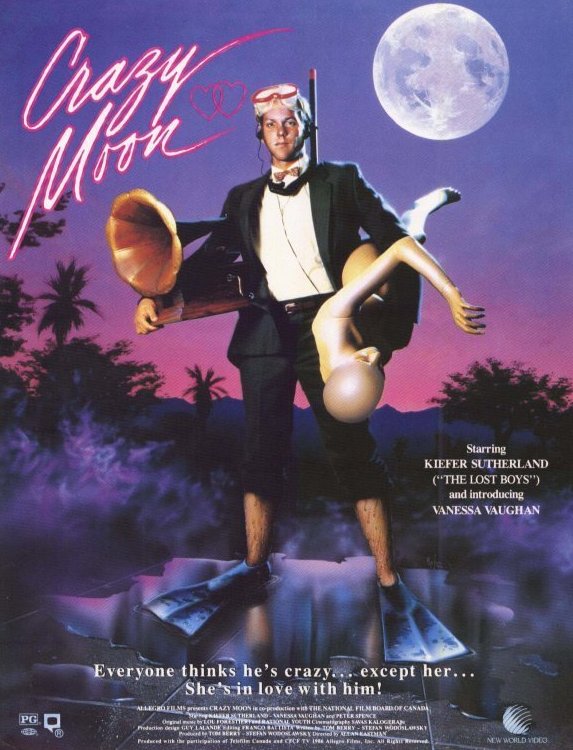 Rebel seeking a cause


Today (November 8), U.S. voters might have preferred a ballot that featured TV’s presidential players, such as Designated Survivor’s Kiefer Sutherland. Then the issues would include early lapses in the candidate’s judgment, such as the 1987 comedy Crazy Moon.

CRAZY MOON. Written and produced by Tom Berry and Stefan Wodoslawsky.  Music by Lou Forestieri. Directed by Allan Eastman. Running time: 88 minutes. Mature entertainment. SOME FILMS ARRIVE WITH flourish and fanfare. Others, like Crazy Moon, are unheralded, appearing out of nowhere as if they’d been found in a basket outside the theatre door.
Here’s a clue. Starring in this particular basket case is Kiefer Sutherland, lookalike son of actor Donald Sutherland by his first wife Shirley Douglas.
He’s can currently be seen [1987] in The Lost Boys. According to that film’s press notes, he’s appeared in three previous features (1984’s The Bay Boy, 1986’s At Close Range and Stand By Me). Mentioned as well are two 1986  TV movies (Brotherhood of Justice and Trapped in Silence).
Listed as his future releases are Promised Land, A Perfect Stranger and Bright Lights, Big City.
Well, that's not a lot of help.
Let’s check out Allan Eastman, Crazy Moon’s Winnipeg-born director. According to the Academy of Canadian Cinema’s 1987 Who’s Who, Eastman’s credits include episodes of The Beachcombers, Danger Bay and the CBC-TV mini-series Race for the Bomb. Crazy Moon, his third feature, is listed as a 1985 project.
Mystery solved. Made with the co-operation of the National Film Board and the participation of Telefilm Canada, Crazy Moon is one more example of your tax dollars at play, fostering the English-language film industry in Montreal.
Vapid and vague, it’s supposed to be a romantic comedy. Sutherland plays Brooks, a rich kid in languid rebellion against nothing in particular.
He hides out in 1940s music and memorabilia, upsetting his Establishment father, Alec (Ken Pogue), and bemusing his coke-snorting elder brother, Cleveland (Peter Spence, also cast as his brother in The Bay Boy). One day a dimpled window dresser smiles at him from a shop window.
Coming out of himself enough to attempt a courtship, Brooks discovers that Anne (Vanessa Vaughan) is deaf. She’s also indomitable, and her working-class grit inspires him to something like self-discovery.
That, I think, is what the producer-screenwriter team of Tom Berry and Stefan Wodoslawsky had in mind. For the most part, though, their picture dithers about in a state of awkward indecision, unable to bring its characters into focus.
Brooks and his family are total ciphers, figures of neither fun nor substance. Anne, by contrast,  has a warmth and authenticity that almost makes the dismal exercise worthwhile.     The credit goes to actress Vaughan who, like 1987 Oscar-winner Marlee (Children of a Lesser God) Matlin, really is deaf. Pert and emotionally persuasive, she steals the show with her performance and provides Eastman’s picture with its best moments.
Had there been more of her, Crazy Moon would have been a better picture.
As it is, it had to sneak into town, an embarrassment to Sutherland and to the moribund federal funding agency involved in its creation.

Afterword: Crazy Moon was director Alan Eastman’s third (of four) theatrical feature credits. By the mid-1980s, it was clear that Ottawa had no real interest in, or talent for, establishing a Canadian feature film presence within world cinema. Movies were financed, then abandoned, and aspiring artists such as Eastman were left with limited outlets for the development of their talents. A graduate of the University of Manitoba and the University of Bristol’s film school, Eastman went on to a 25-year-long career in television, assembling credits as a writer, director and executive producer for a number of TV movies, mini-series and program episodes. He came to specialize in fantasy and science-fiction, working on such series as RoboCop, F/X, Poltergeist:The Legacy and The Outer Limits. In 1997, he directed two episodes of Gene Roddenberry's Earth: Final Conflict in Toronto, an assignment that led to work on the Hollywood-based Star Trek: Deep Space Nine and Star Trek: Voyager, as well as Gene Roddenberry's Andromeda.
Crazy Moon was the only time that Eastman directed Kiefer Sutherland, whose Hollywood career was well on track by the time the Montreal-made film went into release. Playing relentless counter-terrorism agent Jack Bauer for eight seasons on the gimmicky Fox Network thriller 24 turned Canadian actor Sutherland into an American icon. Currently he has the title role on Designated Survivor, where he is seen as reluctant U.S. President Thomas Kirkman. The show was rushed to air by ABC, who believed the story of an attack on Congress that wipes out the federal executive, legislative and judicial branches would find an audience in the final weeks of the 2016 election campaign. As the title suggests, Housing and Urban Development Secretary Kirkman is the last man standing when the bomb goes off, and he’s the one tasked with rebuilding the government. Filmed in Toronto, the show's sixth episode airs tomorrow (November 9). Despite being more subdued than Jack Bauer, Kirkman already has received higher favourability ratings than either of the candidates in today’s real-life election.