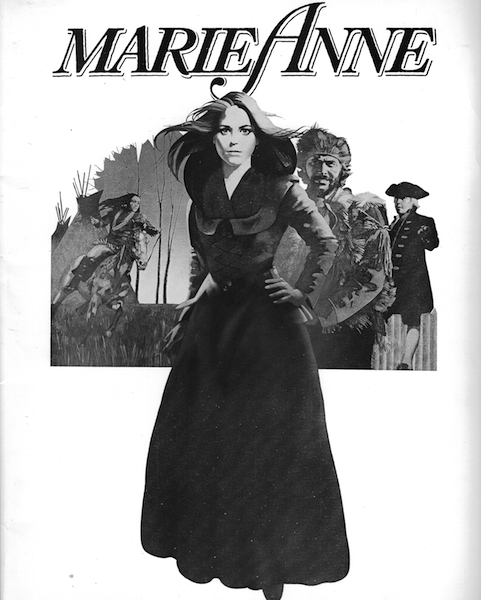 Andrée Pelletier, who plays the title role in director Martin Walter’s 1978 historical Western Marie-Anne, is prominently featured on the cover of the film’s press package.

Setting fire to the prairie


A prominent politician’s daughter, Andrée Pelletier was never afraid to seize the moment. Born on this day (March 1) in 1950, she moved behind the camera (to write and direct) after establishing herself as an actress in films such as director Martin Walters’s Marie-Anne (1978).

MARIE-ANNE. Written by George Salverson, based on a story by Marjorie Morgan. Music by Maurice Marshall. Directed by R. Martin Walters. Running time: 88 minutes. PIERRE BERTON WILL NOT BE pleased. In his 1975 best-seller, Hollywood’s Canada, he railed against the way American filmmakers have distorted this country’s history for the purpose of entertainment.
Films like 1949’s Canadian Pacific, The Cariboo Trail (1950) and Northwest Mounted Police (1940) made him fighting mad. I suspect that he’ll view the Canadian-made Marie-Anne more in sorrow than in anger.
Here is a story idea with epic potential. Jean-Baptiste Lagemodière, an employee of the Hudson’s Bay Company circa 1808, was a legendary voyageur. Marie-Anne Gaboury, the woman he took to wife, was every bit his match in fire, spirit and determination.
When, following their marriage, her man headed west, Marie-Anne insisted on going with him. She defied HBC rules to become the first European woman in the Canadian West. She passed her defiance on through her children to her grandchildren, one of whom was named Louis Riel.
It’s great material. The film version, unfortunately, looks more like a Hollywood backlot B Western from the 1950s, the kind of picture that always seemed to star Audie Murphy,
Director R. Martin Walters had problems. One was his budget (reportedly only $650,000), the other was an original screenplay, based on Marjorie Morgan’s novel, that turned Marie-Anne’s story into a Harlequin romance.
Here, Jean-Baptiste (John Juliani) is reluctant to take Marie-Anne (Andrée Pelletier) west, not so much because of the hardships and danger, but because of Tantou (Tantoo Cardinal), the Cree maiden with whom he’s become used to romping in the woods.
On their arrival in Fort Edmonton, his light-skinned wife inspires lust in the heart of Many Horses (Gordon Tootoosis), the local chief. Thus are we set up for the kind of confrontational climax that traditionally saves the settlement and brings peace to the savage frontier.
Marie-Anne is an off-type role for Pelletier, who made her first film appearances around the time that her father, the Honourable Gérard Pelletier, was serving as Canada’s Secretary of State. Vancouver audiences remember her as the nakedly independent Rita Sauvage,  a nature-loving hippie in director Gilles Carle’s Les Mâles (1972).
Later,  in an English-speaking role, she played an urban feminist named Cindy, a pants-suited prostitute in director Frank Vitale’s East End Hustle (1976).
Here, her high collars and full skirts give filmgoers a chance to concentrate on her acting, a performance good enough to earn her a Canadian Film Award nomination last September [1978]. (She lost to Helen Shaver, seen in the film In Praise of Older Women.)
Marie-Anne is Pelletier’s picture. Less impressive are her male co-stars, Juliani (a Vancouver actor and stage director, who filmgoers will recall from the locally-made feature Madeleine Is .   .   .) and Tootoosis, the Cree actor who played the fugitive Almighty Voice in the 1974 historical drama Alien Thunder. The men are stolid in stolidly written roles.
In making his film, Walters uses as his set the reconstructed Fort Edmonton, an Alberta tourist attraction. In doing so, though, he locked himself into a look some 40 years too modern for his story.
Because of the Fort’s urban surroundings,  it was impossible for the director to capture any of the sweep, openness, grandeur or scale of the wilderness West.
Nor do we get any feeling of the tense, often violent competition that existed between a pair of rough and ready fur-trading companies. Inhabitants of Fort Edmonton were less in danger from the native population than from the rival North West Company, whose Fort Augustus was within shooting distance.
This particular conflict, central to our Western history,  is never once mentioned.
Historical drama is a relatively new trend in English-Canadian film production. Marie-Anne, while no great epic, is at least a step in the right direction.

Afterword: Marie-Anne is Martin Walters’s only feature film directing credit. The British-born Canadian learned his craft as an assistant director, making his big screen debut working with legendary U.S. director William Castle on his B.C.-made suspense fantasy Shanks (1974). Walters made the acquaintance of Alberta-based producer Fil Fraser while working as director Silvio Narizzano’s assistant on their 1977 adaptation of the classic Canadian novel Why Shoot the Teacher?  After Marie-Anne, he returned to the second chair. In 1987 he added “producer” to his résumé, enjoying a creative career of some 40 years.
Marie-Anne was Andrée Pelletier's sixth feature, and her third starring role. As noted in the above review, it won her a Canadian Film Award nomination, her first of six to date. A bilingual Montrealer, Andrée Pelletier is at ease in either official language and on both sides of the camera. In 1979, she was first-time director Claude Gagnon’s cinematographer, filming his urban drama Keiko. In 1982, she shot Gagnon’s second feature, Larose, Pierrot et la Luce. Pelletier made her debut as a screenwriter in 1985, contributing to the script of director Michael Rubbo’s family fantasy The Peanut Butter Solution.
She demonstrated her serious side writing director Michel Brault’s 1990 socially conscious Paper Wedding. That same year, Pelletier made her directorial debut with Voodoo Dolls, a low-budget horror movie set in a New Orleans girls' school. In 1994, she followed up with a disappointing sci-fi feature, Anchor Zone. Better received was the French-language Blanche, an 11-episode TV series that she wrote for director Charles Binamé. Set in the 1930s, it tells the story of a young woman who pursues her ambition to become a doctor in a society not ready to accept female physicians. It was broadcast in 1993 on the Radio-Canada TV network. Out of the public eye in recent years, Andrée Pelletier turns 67 today (March 1).