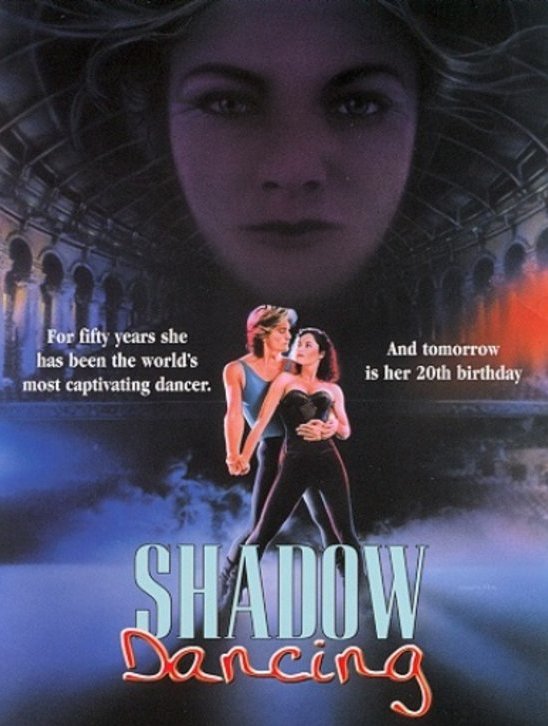 
A pop musician who enjoys fame in France and Japan, Québec’s Lewis Furey tried his hand at feature film directing on three occasions. Born on this day (June 7) in 1949, Furey includes among his theatrical credits the 1988 fantasy thriller Shadow Dancing.

SHADOW DANCING. Written by Christine Foster. Music by Jay Gruska. Directed by Lewis Furey. Running time: 101 minutes. Mature entertainment with the B.C. Classifier's warning: occasional coarse language and suggestive scenes. IT HAPPENS WHEN SHE puts on the mask. Suddenly, Jessica Lilliane (Nadine Van der Velde) dances like one possessed.
Choreographer Philip Crest (Gregory Osborne) sees the difference immediately. Earlier in the day, he'd decided to drop Jessica from his show, a musical based on the mythological monster Medusa.
Now, though, he's reconsidering.
“I like the energy,’’ he says with a hungry look.
“Dance with me,” she demands.
“Without the mask.”
“With the mask,” she insists.
Shadow Dancing, passing through Vancouver on its way to the video stores, is a mess. The sort of thing that happens when filmmakers mix their moods in pursuit of novelty, it is an inept attempt to cross Flashdance with The Exorcist.
As written by Christine Foster, it is the story of a young dancer looking for her big break. Applying for an understudy's role, Jessica gets her chance at stardom when a company member suffers an injury.
Why is she not happy? Well, for one thing, choreographer Crest is "weird. "
"He gives me the creeps," she tells her live-in boyfriend, professional chauffeur Paul Schneider (James Kee).
For another, the Beaumont Hall theatre has a history of tragedy. Fifty years earlier, a headliner named Lili La Nuit was accidentally electrocuted on stage before a packed house.
There's something about the theatre, about its elderly owner Edmund Beaumont (Christopher Plummer) and his dotty sister Sophie (Kay Tremblay) that makes Jessica uneasy.
There’s something that draws her to Lili's things, to her mask . . .
Despite a high-powered cast that includes John Colicos, Charmion King, Brent Carver and Shirley Douglas, Lewis Furey's uninspired direction is likely to provoke more yawns than shivers.
His cliché-ridden picture has a flat, underpopulated look. Its dance sequences are about as exciting as an aerobics class.
Financed by Telefilm Canada and the First Choice paycable network, Shadow Dancing offers an obvious tale obviously told.
*    *    *
DOUBLE, DOUBLE: In common with Flashdance star Jennifer Beals, Shadow Dancing’s Nadine Van der  Velde is no dancer.  When her character Jessica dons a mask, though, she performs like a pro. Not unexpectedly, there's a pro behind the mask — Brenda Matthews of Canada's National Ballet.

Afterword: Notable for her absence from Shadow Dancing’s impressive cast list is director Lewis Furey’s wife, actress Carole Laure. She starred in his first theatrical feature, 1985’s Night Magic, and his last one, Rats and Rabbits (2000). Their life-long creative collaboration is something of a Québec legend, the story of an anglophone Quebecker who found love with a francophone Québecoise.
His story begins in urban Montreal. In 1964, the teenaged Lewis Greenblatt met poet and folk-singer Leonard Cohen in a downtown cafe. The encounter opened the young classical violinist’s eyes to a new musical world and, in 1975, he released his first pop album, the self-titled Lewis Furey. The same year, he contributed the musical score to director Gilles Carle’s feature film La Tête de Normande St. Onge, winning his first Canadian Film Award in the process.
Her story begins in rural Shawinigan. In 1971, she made her acting debut in director Jean Chabot’s NFB feature Mon enfance à Montréal. Her starring role in Carle’s La Tête de Normande St. Onge was her seventh movie, and the one on which her career path met that of Furey. It is part of the legend that he persuaded her to focus on her singing talent, that she became his muse and that, together, they have made a beautiful musical career.
In 1977, they co-starred in Carle’s romantic fantasy L’Ange et la femme, then did it again in Carle’s 1980 musical feature Fantastica. Furey wrote the music for both movies. In 1983, the couple celebrated the birth of their daughter, Clara, and the release of Carle’s adaptation of the classic Québec novel Maria Chapdelaine. Laure’s performance received a Genie Award nomination and Furey’s music earned him his second Genie win. Two years later, Furey made his own directorial debut with Night Magic (1985), a musical fantasy he co-wrote with his old friend Leonard Cohen. It provided yet another angelic role for Laure, who starred as the heavenly beauty who inspires an ambitious musician (played by Nick Mancuso). It earned Furey his third Genie Award (for the song Angel Eyes).
Shadow Dancing, Furey's second feature as director, was distributed across Canada. His third (and last) feature, didn't make it to Vancouver. A bleak satirical comedy, 2000's Rats and Rabbits was adapted from George F. Walker’s 1974 stage play Beyond Mozambique. Despite Laure’s star presence, it was not well received, and thereafter the couple focused their energies in other directions. In 2011, Furey performed in concert with an ensemble that included his adult daughter Clara. In a solo tour, he performed personal interpretations of songs from the Brahms repertoire. Last August (2016), he attended  the five-day International Film Festival Les Percéides in Percé, Québec, in the company of its honorary president, his wife Carole Laure. Today (June 7), Lewis Furey celebrates his 68th birthday.