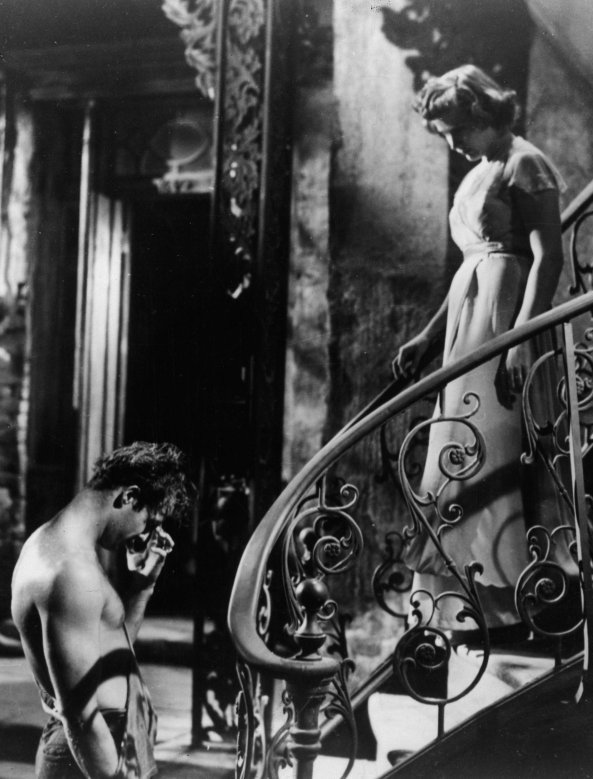 
Confronting the beast in American culture


Of the two Stanleys in Alex North’s creative life, Stanley Kubrick was the biggest jerk. North, born on this day (December 4) in 1910, was the A-list composer that director Kubrick called in to score his 1968 sci-fi feature 2001: A Space Odyssey. At the time, North had nine Academy Award nominations to his credit, including one for his previous collaboration with Kubrick, the 1960 epic Spartacus. At the 2001 premiere screening, North was shocked to discover that his music had been replaced by an eccentric selection of cuts from the director’s own classical record collection. Lied to and insulted by the self-indulgent Kubrick, North enjoyed better relations with such directors as Daniel Mann, with whom he worked on seven features, John Huston (five features) and Martin Ritt (four features). The other Stanley closely linked to North was Stanley Kowalski. The brutish creation of playwright Tennessee Williams, Kowalski first strutted the stage 70 years ago yesterday (December 3, 1947), when A Streetcar Named Desire premiered on Broadway. Four years later, its director Elia Kazan was preparing a movie adaptation. He called the New York-based North to Hollywood to write the music. More than up to the task, the innovative composer created film’s first all-jazz score. It earned him the first of his 15 Oscar nominations, as well as the enduring respect of his artistic colleagues. Included on the American Film Institute’s 2005 list of all-time best movie scores, North’s music remains the highlight of Kazan’s 1951 screen classic A Streetcar Named Desire.

A STREETCAR NAMED DESIRE. Written by Tennessee Williams. Adapted for the screen from the 1947 stage play by Tennessee Williams. Music by Alex North. Directed by Elia Kazan. Running time: 125 minutes. Mature entertainment with no B.C. Classifier's warning. "STELLA!"
He stood at the foot of the wrought iron stairs, anguished and sweaty, making stage history.
"STELLLLLAAAAA!"
It wasn't at all funny at the time. In 1947, the 23-year-old Marlon Brando electrified Broadway audiences with his portrayal of Stanley Kowalski, a 20th-century American beast.
Though it's hard to take seriously today [1994], Tennessee Williams's A Streetcar Named Desire provided the young Method actor with his defining role. In 1951, a theatrical landmark became a controversial motion picture classic.
For those of us who missed that mid-century moment, the film has been re-released. It opened Friday at the Caprice in its "uncensored, director's cut version."
It comes with a fascinating history.
Williams, the tormented Mississippi-born playwright, changed the face of the American theatre with his deeply neurotic, frankly sexual dramas. Streetcar, says critic Foster Hirsch, details "the battle between repression and release, between the puritan and the cavalier."
Set in post-war New Orleans, it opens with the arrival of widowed Blanche DuBois, "the lady of illusion and artifice, the fluttering southern belle whose veneer of refinement masks emotional starvation and sexual rapacity."
She takes the Desire Street tramcar to the Belle Reve quarter. Blanche's younger sister Stella lives there with her brutish factory-worker husband Stanley, "the muscled male whose potency contains the promise of both salvation and destruction."
During her visit, Blanche will be courted by Stanley's bachelor buddy Mitch. Dirty secrets are revealed and passions are enflamed. Translated to film, the drama was a major challenge to the existing system of cinema self-censorship.
Elia Kazan, who had directed the stage production, also directed the movie. He took most of his Broadway cast — Brando, Kim Hunter (as Stella) and Karl Malden (as Mitch) — to Hollywood with him.
Vivien Leigh, who had played Blanche in London, was the picture's only "movie star." The result, says Maurice Yacowar (in his 1977 book Tennessee Williams and Film), was "a model of sensitive, faithful adaptation."
The controversy "was due to the social context. The play dealt with topics – insanity, nymphomania, rape, speculation about the nature of man – that were rather heady stuff for the American cinema in the early 1950s."
Historical fascination notwithstanding, Kazan's Streetcar is a pretty tame ride in the 1990s. Its concerns – topics that could easily turn up on an After-School Special today – are handled with a poetic circumspection that now seems as quaint and mannered as Restoration comedy.
That the "uncensored" version is rated Mature (with no B.C. Classifier's warning) tells you all you need to know about its contemporary shock value. At the preview screening, I wondered how Williams's material might have fared in more recent times.
Just think of what might have been if his Streetcar had run along some alternative time tracks. Stops along such a fantasy line include:
● 1961: Director Richard Brooks, buoyed by the success of his 1958 feature Cat on a Hot Tin Roof, goes on location in the Big Easy to film his version of Streetcar. Elizabeth Taylor (Maggie in Brooks's earlier Williams adaptation) plays Blanche to Rod Steiger's Stanley. Both are nominated for Oscars. Jean Simmons and E.G. Marshall are featured as Stella and Mitch.
● 1971: Julie Christie is director Mike Nichols's choice for Blanche. Despite her off-screen liaison with Warren Beatty (Stanley), their actual performances are surprisingly tepid. Karen Black and Robert Vaughn seem overwrought in the supporting roles. Screenwriter Buck Henry's foul-mouthed adaptation is no help.
● 1975: Mel Brooks's Williams pastiche, A Streetcar Named Oy Vey, turns into a cult hit. Anne Bancroft, Peter Boyle, Madeleine Kahn and Gene Wilder generate laughs in the principal roles.
● 1981: To demonstrate his seriousness, Woody Allen films his version in stark black and white. His latest discovery, Broadway actress Meryl Streep, wins an Oscar as the mad Blanche. As Stanley, Robert De Niro projects a grim intensity. Diane Keaton is a winning Stella; Max Von Sydow is stolid as Mitch.
● 1991: Though she loses the Oscar to Jodie Foster (in Silence of the Lambs), Kathleen Turner's Blanche is considered the best ever. So, too, Kevin Kline's Stanley. They get superb support from Holly Hunter and John Lithgow. Bruce Beresford's direction wins him an Academy Award.

Afterword: So, to commemorate Alex North's birthday, let's take our speculative game one step further and consider who provided the music for our alternate-reality Streetcars. Given their later movie collaborations, I like to think that Richard Brooks gave the assignment to Quincy Jones in 1961. Mike Nichols, by contrast, called upon his 1967 Graduate collaborators Paul Simon (songs) and Dave Grusin (music). A Mel Brooks movie, of course, always benefits from a score by the versatile John Morris. For his Streetcar adaptation, Woody Allen, following the example of Stanley Kubrick, rummaged through his record collection and selected some Preservation Hall Jazz Band standards. Finally, Bruce Beresford knew that he could trust his friend and frequent collaborator Georges DeLerue to maintain the sultry mood.
Though rejected by the odious Stanley Kubrick, Alex North’s 2001: A Space Odyssey score was not entirely lost. The composer repurposed some of its themes for the1968 political drama The Shoes of the Fisherman, director Michael Anderson’s adaption of the Morris West novel about a Pope involved in international politics. He worked other themes into director William Castle’s Shanks, a 1974 fantasy feature shot on location in B.C.’s Fraser Valley. Still more of it was heard in Matthew’ Robbins’s medieval epic Dragonslayer, the 1981 feature that starred a fire-breathing Vermithrax Pejorative. Shortly after North’s death in 1991, his colleague and admirer Jerry Goldsmith made it his mission to record and release the original score as a soundtrack CD. That happened in 1993, appearing on the film music specialty label Varese Sarabande.