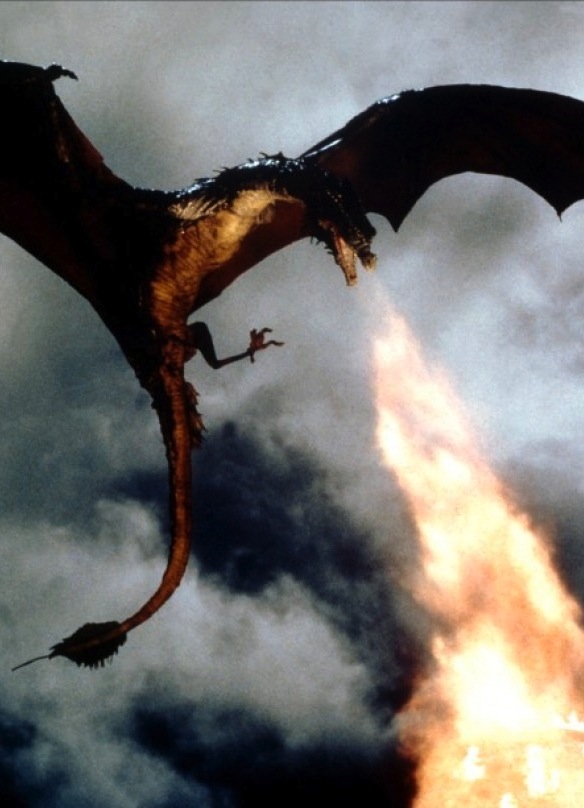 
Warming to a new screen experience


Today (January 16) is Appreciate a Dragon Day. First marked in 2004, it was the idea of author Donita K. Paul, who was celebrating the publication of her young adult novel Dragon Spell. With eight dragon-themed books currently to her credit, the Christian romance writer continues to observe Dragon Day, an event that promotes the positive portrayal of the the legendary serpents favoured by such mainstream fantasy novelists as Anne McCaffrey and Barbara Hambly. Dragons making nice is a recent departure from the monsters of yore, malevolent creatures with mythic roots in many Western cultures. From the Middle East to Northern Europe, national heroes such as Gilgamesh, Beowulf, Siegfried and St. George all battled dragons that preyed upon mankind with demon-like powers. It was this tradition that inspired J.R.R. Tolkien to create the hobbit-bothering Smaug. The idea of the good dragon comes to us from the Far East. In Chinese folklore, the four-legged snake symbolizes power and good luck, attributes that make the year of the dragon the most auspicious of the 12 on China's zodiacal calendar. Though moviemakers have shown us both kinds, recent films favour sweet-tempered serpents. Arguably the cinema's best bad dragon is Vermithrax Pejorative, the 400-year-old villain in director Matthew Robbins's 1981 fantasy classic Dragonslayer

Monday, June 29, 1981.
DRAGONSLAYER. Co-written by Hal Barwood. Music by Alex North. Co-written and directed by Matthew Robbins. Running time: 109 minutes. Rated Mature with the B.C. Classifier's warning: may frighten young children. VALERIAN (CAITLIN CLARKE) HAS A secret. A village youth of Urland, Valerian has journeyed to distant Cragganmore, the castle of Ulrich (Sir Ralph Richardson), to beg the old enchanter's help.
Urland is cursed with a dragon. In an effort to appease the raging reptile, Urland's King Casiodorus (Peter Eyre) has taken to feeding it maidens of the realm.
Every six months, a lottery is held to choose a new victim from among the kingdom's daughters. To end this horror, Valerian has come to Cragganmore seeking a Dragonslayer.
Earlier this year [1981], when it became obvious that sword and sorcery would be the next major movie trend, I cringed. Sword and sorcery may be a big mover on the paperback book stands but, frankly, I've never been able to read the stuff. Conan and his cohorts leave me colder than a prairie winter.
Excalibur was a hopeful sign. In adapting the legend of Arthur to the screen, director John Boorman created a thing of beauty that will remain a cinematic joy for a long time to come.
Now comes Dragonslayer, a big screen original. If this is sword and sorcery, I want more.
"Not a fantasy," say the posters. Not a fantasy but Fantasy, with a capital F. Between them, screenwriters Hal Barwood and Matthew Robbins have created a stunning cinema spectacular, a world of wonders that has solidity and substance.
It is a world that we see through the eyes of Galen Bradwardyn (Peter MacNicol), the sorcerer's apprentice. When his mentor Ulrich is struck down by Casiodorus's henchman Tyrian (John Hallam), the young man takes up his late master's quest.
Barwood and Robbins, a writing team whose previous collaborations include 1974's The Sugarland Express, The Bingo Long Travelling All-Stars and Motor Kings (1976), MacArthur (1977) and Corvette Summer (1978), tell us that "the origins of Dragonslayer are in the 'Sorcerer's Apprentice' sequence from (Disney's animated classical concert feature) Fantasia."
Their Galen has all the moves. What he lacks is practical experience. Like any newly graduated student, he takes on his first real job with a mixture of bravado and fear.
For basic storyline, the writers looked to the legend of Saint George and the dragon. The result is a breathtaking, sixth-century creature feature.
As a director, Matthew Robbins has all the moves. Our introduction to the dragon Vermithrax Pejorative could hardly be more effective or, for that matter, more scary.
Following the death of Ulrich, the story cuts to the dragon's lair. A victim (Yolanda Palfrey) is chained to the sacrificial post and we share her agony and horror as she struggles to free herself.
Here the dragon is only glimpsed, a huge claw rising from a glowing pit, a shadow, a sound. This victim does not escape her fate.
A different mood is developed when Brother Jacopus (Ian McDiarmid), a missionary monk preaching the new Christian religion, attempts to exorcise the creature. Jacopus believes that he is facing an incarnation of Satan, and our further glimpses of Vermithrax do nothing to dispel this hellish notion.
When Galen finally confronts the beast deep within the earth, we get our first good, long look at what Robbins's dragon designers have wrought. Unlike most creature close-ups, it is no disappointment.
Created by Disney Studio artists, Vermithrax is the absolute essence of dragon, a fire-breathing, flying reptile every bit as terrifying as it's supposed to be. Sensitive subteens will have nightmares for weeks if they see this movie.
Despite the Disney involvement, Dragonslayer is not a kid's picture. It will appeal more to teens because, reduced to essentials, it is the story of a boy becoming a man, and a girl becoming a woman.
Casiodorus has a daughter, of course. She is the Princess Elspeth (Chloe Salaman). She helps Galen out of his first truly tight spot, and it is she who will offer herself as the ultimate dragon's bait.
Robbins's picture will also appeal to fantasy-oriented adults. A superbly mounted production, Dragonslayer has a story with depth and resonance to carry it along. A total entertainment experience, it is a triumphant bit of screen magic, the kind of tale that the movies were made to tell.
*    *   *
HEY, NONNY, NONNY: The gang's all here. Reading the credits for Dragonslayer is like flipping through a directory of the film industry's brightest young technical talent.
"Sound re-recorded at Zoetrope Studios." That, of course is Francis (Apocalypse Now)  Coppola's company.
"Photographic effects produced at Industrial Light and Magic, Inc." That's George (Star Wars) Lucas's organization.
"Supervisor of special mechanicals effects . . . Brian Johnson." An Oscar winner for his work on 1979's Alien, Johnson's credits range from 2001: A Space Odyssey to The Empire Strikes Back.
"Paramount Pictures Corporation and Walt Disney Productions." As co-producers Paramount and Disney are showing adventurousness and imagination. Their first corporate collaboration, Popeye, involved the unique talents of director Robert Altman.
For Dragonslayer, they've gathered together the cutting edge of the new Hollywood to create an exciting new film experience. Together, they succeed brilliantly.

Afterword: Though I still believe that the filmmakers succeeded brilliantly in their artistic creation, Dragonslayer did not succeed at the box office. For screenwriter Matthew Robbins, it was the second of just five features he got to direct. He'd made his debut with the 1978 teen comedy Corvette Summer, Mark Hamill's first film after Star Wars.  Robbins followed Dragonslayer with the 1985 teen drama The Legend of Billie Jean, actress Helen Slater's first film after Supergirl. In 1989, he directed the lovely, E.T.-like urban fantasy *batteries not included, collaborating on the screenplay with feature-film newcomer Brad Bird. The result was a hit, but Robbins's career did not benefit from its success. The next year, he went on location in B.C. to shoot a lost dog comedy called Bingo,