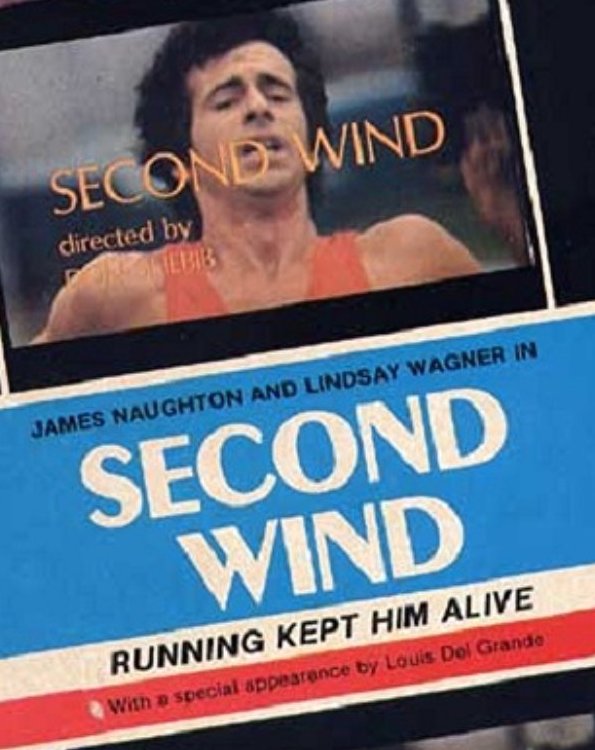 Actor James Naughton is featured on the cover of the videocassette package of director Don Shebib’s 1976 domestic drama Second Wind.


In pursuit of something more


“Reliable” is the word often used to describe James Naughton, the New York-based character actor who’s been a familiar face on television since 1972. Born on this day (December 6) in 1945, his first feature film starring role was in director Don Shibib’s 1976 tale of inner conflict, Second Wind.

SECOND WIND. Written by Hal Ackerman. Music by Hagood Hardy. Edited and directed by Donald Shebib. Running time: 93 minutes. General entertainment with no B.C. Classifier’s warning. HERE'S A SMALL WONDER — a story about a man weathering a life crisis that is honest, involving, entertaining and thoroughly believable.
Another small wonder. Here is a cast of little-known but solidly professional performers who put it across to near perfection.
And yet one more. This is a movie that tells the story of a troubled marriage and makes it absorbing without ever once resorting to nudity, crudity, explicit sex or violence.
The sum it all is a wonder called Second Wind, director Don Shebib’s fourth feature. Arriving in town during a shower of springtime schlockers, it is in danger of being missed by the vast and varied audience who would enjoy it most, the filmgoers who made such gentle, General-rated films as 1974’s The Dove and 1975’s The Other Side of the Mountain local hits.
The challenge faced here is not particularly exotic, but all the more real for it. Roger Mathieson (James Naughton) has just turned 30.
A comer at 21, he has just been made vice-president of the company he works for, the youngest in its history. He is somewhat surprised by his own reaction to his success.
"It all seems so permanent," he tells a co-worker. "I never saw myself as a stockbroker.”
His wife, Linda (Lindsay Wagner, perhaps better known as television's Bionic Woman), senses his uneasiness. “Isn’t this something you've always wanted?" she asks.
"I don’t know what I've always wanted," he answers, and we know that there is a storm brewing in this apparently happy and untroubled life. Roger is looking for some kind of risk, a self-affirming challenge.
He’s ripe for any number of things.
With this kind of set-up, there is usually a storm brewing for a director and his scriptwriter. Too often such crises lead to melodramatic excesses.
Somebody like Ingmar Bergman responds with a tediously heavy soap opera like Scenes From a Marriage (1973). Lesser talents use it as an excuse for embarrassingly stupid infidelity comedies or overwrought action dramas.
Shebib's screenwriter, Hal Ackerman, skillfully steers a course between plot excesses and banality. His bright, witty script etches in characters with swift economy, but without sacrificing depth. He builds situations logically, developing a story that is refreshingly human in its scale.
The challenge that Roger responds to is an athletic one. He hears an internationally-known track coach pontificating to a TV interviewer and likes the idea of “an inner victory.” He begins jogging with some of his neighbours, and becomes friends with Pete (Ken Pogue), a local coach.
It's no soft touch for a 30-year-old, but Roger pushes himself. His work begins to suffer and we see that there is another young office comer in the background.
In the foreground is his wife, who can’t quite accept his new obsession, and a younger woman named Paula (Tedde Moore) who quite frankly comes on to him.
It was no soft touch for director Shebib either. In putting together his film, he negotiates a minefield of potential cliches to emerge unscathed. Filmgoers, meanwhile, will be both surprised and amazed at the kind of relationship that develops between Roger and Paula.
The dramatic crunch comes when Pete tells his pupil that old supercoach Tom Packard (Gerald Parkes), Roger's original inspiration, is looking for a new runner. The big moment will come at a novice race that is soon to be run.
Training for it could lose Roger his marriage and his job.
The star of the show is actor Naughton, last seen as a weak-willed law school dropout in i973’s Paper Chase. Looking like a handsome Elliott Gould, Naughton carries off his role without Gould’s penchant for Jerry Lewis-like mannerisms. He catches the inner conflict within a man known for his wit and personal intensity,
Shebib provides him with top direction and solid support in all departments. Cameraman Reginald Morris’s cinematography is slick and sophisticated. Hagood Hardy’s inspired musical score knows just when to shut up and when to come on strong.
Shebib’s first feature, 1970’s Goin' Down the Road, suggested that he would be a major talent. Though he seemed stalled on his last two projects, 1971’s Rip-Off and Between Friends (1973), he is on the move again and responsible for an exciting, stylish picture that can be enjoyed by the whole family.
His Second Wind is a first-class film.

Afterword: Second Wind was a product of a time when Canadian producers found it easier to obtain financing if they cast American actors in starring roles. That strategy worked for Vancouver-born producer James Margellos. He’d used it to make 1973’s Canadian Film Award-winning best picture Slipsteam, shot in Alberta starring Luke Askew, 1973’s Paperback Hero, shot in Saskatchewan with Kier Dullea in the title role, and 1974’s The Inbreaker, shot in B.C. with Johnny Crawford. No surprise then, he looked south for the talent that went on location in London, Ontario to film Second Wind.
Best known at the time from the single-season 1974 television series Planet of the Apes, James Naughton gave an outstanding performance in what was his first starring role in a feature film. Though it wasn't a breakthrough to Hollywood fame, he did go on to win two Tony Awards for his stage work on Broadway (in 1990 and 1997), and make a comfortable living as a TV actor. Still working regularly, James Naughton turns 72 today (December 6).