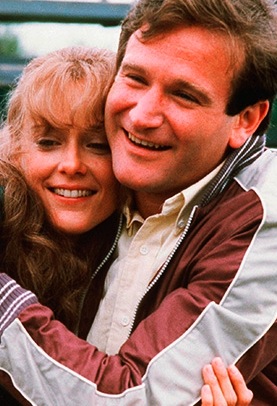 
Wrestling with problems of adaptation


The success of his fourth novel made John Irving independently wealthy. George Roy Hill, an adaptor of best-sellers who was born on this day (December 20) in 1921, directed The World According to Garp for the screen in 1982, with Robin Williams in the title role.

Monday, August 16, 1982.
THE WORLD ACCORDING TO GARP. Written by Steve Tesich. Based on the 1978 novel by John Irving. Music adapted by David Shire. Co-produced and directed by George Roy Hill. Running time: 133 minutes. Mature entertainment with the B.C. Classifier's warning: frequent suggestive language, some very coarse language and swearing, occasional nudity, suggestive scenes and violence. THE CHOICES ARE LIMITED. Whenever a filmmaker sets out to adapt a novel, he has but three ways to do it.
1.        He can be slavishly faithful to the published work and transcribe the literal images to film. Unfortunately, he risks producing a dead-in-the-water picture like 1974's The Great Gatsby.
2.        He can attempt to be faithful to the author's intent, making a movie that conveys the feeling rather than the specific intent of the book. The results can either be a motion picture masterpiece (like 1981's Ragtime or The Godfather; 1972) or a disaster (The French Lieutenant's Woman; 1981).
3.        He can ignore the original entirely. The James Bond pictures gave up on Ian Fleming's novels years ago.
If a filmmaker is any good, he knows that a movie must stand on its own regardless of its source material. He owes it to the filmgoer who comes to his picture with no knowledge of the written work. His audience has every right to expect a film that can be understood and enjoyed on its own merits.
His approach picked, the filmmaker then follows through, producing a picture that is (a) well done, or (b) not well done. Faced with John  Irving's recent darkly comic novel, the mildly infamous The World According to Garp,  director George Roy (The Sting) Hill decided to take Route 2,  the dangerous intent/impression path.
Whether his finished film is 2 (b) or not 2 (b) is the question. My answer is that Hill's Garp is an amiable failure.
Like his previous attempt at literary adaptation, 1972's Slaughterhouse-Five, Hill's Garp is an intermittently funny series of vignettes drawn from the life of its protagonist. Deliberately conceived out of wedlock by his feminist mother, T.S. Garp (James McCall as a boy; later Robin Williams) is the son of Jenny Fields (Glenn Close), a strong-willed heiress marching to the tune of her own quietly demented drummer.
Pliable, accepting but embarrassed by his world's excesses, Garp becomes a writer even though his own works are overshadowed by those of his mother. We see him live his life, an unblinking eye within a hurricane of social oddness.
The literary folk say that author Irving made something out of all this. Not having read his book, I have only Hill's version to go by, a movie that seems to have no real life of its own.
The problem is that Steve Tesich's adaptation has no strong sense of itself as a screenplay; that is to say, a play designed for communication to an audience by way of the motion picture screen.
Instead, the filmmakers offer us something akin to a commercial teaser for the book, a half-digested series of incidents and encounters, characters and circumstances that we will not really understand until we've gone out and bought the paperback reissue of the novel, with its movie tie-in cover.
It may be that Tesich and Hill are avid readers and were afraid to give away too much of the story, lest it diminish our enjoyment of the book. Even so, that's a hell of a way to go about making a movie.

Afterword: The basic story elements of John Irving's best-selling novel were well enough known at the time of the film's release that recapping them in a review wasn't necessary. Today, it's worth recalling that Irving's dark satire was a tale of sexual extremism. T.S. Garp is the product of a reverse rape — his mother is a nurse who appropriates the seed of a vegetative hospital patient — and his maturation provides Ms Jenny Fields (Glenn Close) with the material for her popular autobiography A Sexual Suspect. A radical feminist, she founds a home for abused women that includes the transsexual former football player Roberta Muldoon (John Lithgow). Among the story's "social oddities" are a self-mutilating cult formed in memory of a battered woman. Among its notorious incidents is an unmanning oral-sex encounter. Although Robin Williams's tightly restrained performance was overlooked at the Academy Award ceremonies, both Lithgow and Close were nominated in their respective supporting performer categories.
Director George Roy Hill established his cinematic reputation on adaptations. His debut feature, 1962's Period of Adjustment, was based on the Tennessee Williams Broadway play, and Hill followed it with Toys in the Attic (1963), the film version of Lillian Hellman's controversial stage drama. In 1964, he switched to books, adapting Nora Johnson's comic novel The World of Henry Orient, before breaking out with Hawaii (1966), based on the James A. Michener historical epic. Established as an A-list director, Hill demonstrated his eclecticism with an original screen musical, 1967's Thoroughly Modern Millie, then earned his first Oscar nomination for the off-centre western Butch Cassidy and the Sundance Kid (1969). He reunited his Butch Cassidy stars Paul Newman and Robert Redford for the 1973 caper comedy The Sting, and won a directorial Oscar for his trouble. Although his later films were less memorable, they include the one that I consider the best Canadian movie not made by a Canadian: 1977's Slap Shot. George Roy Hill died in 2002, just a week after his 81st birthday.