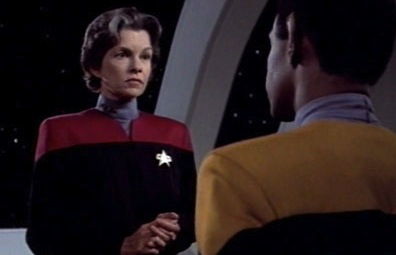 The Nicole Janeway we never knew.


Viewed from the bridge


Though he was the first Canadian to walk in space, what people remember most about astronaut Chris Hadfield are the songs he sang there. Today's quiz tests your memories of another kind of Canadian performer in space, the actors who have played Star Captains.

IN THE REAL WORLD, the race into space was run by men who reported back to Earth in Russian or American accents. On screen, though, the most famous starship commanders gave their orders in measured, Canadian cadences. From the descriptions given below, name the actor seated in the captain's chair.

1.    In the 1956 classic Forbidden Planet, John J. Adams, commander of United Planets Cruiser C57D and the man in charge of its rescue mission to Altair IV was played by this Regina-born actor.

2.    James Tiberius Kirk assumed command of the Federation's starship Enterprise NCC-1701 when the television series Star Trek went on the air in 1966, and continued his Starfleet service through seven feature films, beginning with Star Trek: The Motion Picture (1979). The popular culture's best known spaceman, the role of Kirk was originated by this Montreal-born actor.

3.    Released to theatres as a 1978 feature film before its debut as a television series, Battlestar Galactica told the story of Commander Adama and his Moses-like leadership of the human survivors of an alien attack in deep space. This great American father figure was played by a deep-voiced actor from Ottawa.

4.    A veteran of the final battle between the Alliance and rebel Independents, Malcolm "Mal" Reynolds operates a Firefly-class freighter that has become a refuge for a very dangerous young woman on the run from government assassins. The captain of the Serenity (2005) is played by an actor from Edmonton.

1.    In Star Trek VI: The Undiscovered Country (1991), this Toronto-born actor plays General Chang, the Shakespeare-loving Klingon Chief of Staff who commands of the Bird of Prey dispatched to disrupt peace talks with the Federation at Camp Khitomer.

2.    Born in Dubuque, Iowa, Kate Mulgrew was actually an eleventh-hour replacement for the Canadian actress cast as Nicole Janeway, the first female to have the lead role in a Star Trek television series. Name the Montreal-born performer originally hired to command Voyager (1995).

The above is a restored version of a VCON 37 website quiz by Michael Walsh originally posted in 2011. For additional information on this archived material, please visit my FAQ.