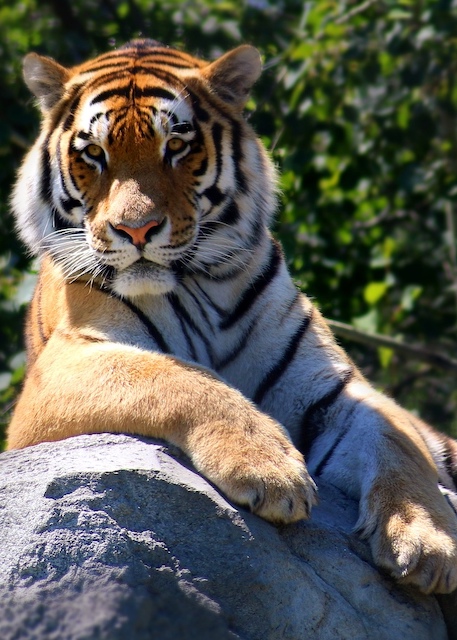 Beloved of Bast, the tiger accepts the honour of presiding over the year that begins today.
THE WHOLE STORY — To see a complete list of the 1,208 items currently posted to Reeling Back, visit the FULL SITE INDEX. To locate specific names or subjects, type your key word(s) into the Search box (located in the right-hand corner of the nameplate above), and click on the magnifying glass (search) symbol. The archive grows with some regularity, so feel free to explore.


And how should we feel about today’s (February 1) Chinese New Year celebrations? Well, according to the striped feline on the sugar-coated corn flakes box, “they're Gr-r-reat!"

I’m all in favour of giving credit where credit is due, so let’s just admit that the Chinese do New Years way better than we do. Today (February 1) is the first day of 4720 on China’s lunar/solar calendar, the Year of the Tiger. One of 12 animals that make up the Middle Kingdom's zodiac, the tiger represents such virtues as bravery, quick-wittedness, resourcefulness, versatility and kindness.

Did you see that? The Zodiac thing — a makeshift menagerie of a dozen creatures — shifts our focus, making the celebration more personal and a lot more fun. Today is all about the tiger, which is not just a big cat, but the biggest cat. In the interests of full disclosure, I admit to being a cat person, so it only follows that my all-time favourite goddess is Ra’s daughter Bast, the Egyptian deity worshipped in the form of a feline.

I’m not sure when I first encountered tigers. It was either during a grade school English class — being made to memorize William Blake’s verse Tyger Tyger, burning bright, / In the forests of the night; / What immortal hand or eye, / Could frame thy fearful symmetry? — or as a wolf cub, where we learned about Shere Khan, the lame tiger in Rudyard Kipling’s The Jungle Book who had it in for Mowgli.

The take-away was that tigers have their place in popular culture. They can be predatory — Shere Khan — or playful, such as Pooh’s friend Tigger or Calvin’s best buddy Hobbes. Today, at the start of a New Year, they can be a reminder of things still left to do.

One of these days, I have to look at Life of Pi, director Ang Lee’s 2012 adaptation of Canadian author Yann Martel’s novel, a story that features a tiger named Richard Parker as a co-star.

Tigers, as it happens, have been officially considered an endangered species since 1975. Concern for their plight was signalled in director John G. Avildsen’s 1973 drama Save the Tiger, a review that I've yet to post to the Reeling Back archive. Perhaps it can be part of a package containing my notice on Disney’s live-action Rudyard Kipling’s The Jungle Book from 1994. In the meantime, the five most recent additions to the archive have been:

KHARTOUM — At the height of its power in Africa, the British Empire suffered an historic defeat, the  subject of director Basil Dearden’s 1966 epic. Charlton Heston and Laurence Olivier face off as the besieged general and the relentless mahdi. (January 26)

LIES MY FATHER TOLD ME — Remembered as a Canadian film classic, director Ján Kadár’s 1975 family drama is a story of  childhood, love and death in 1920s Montreal. (January 16)