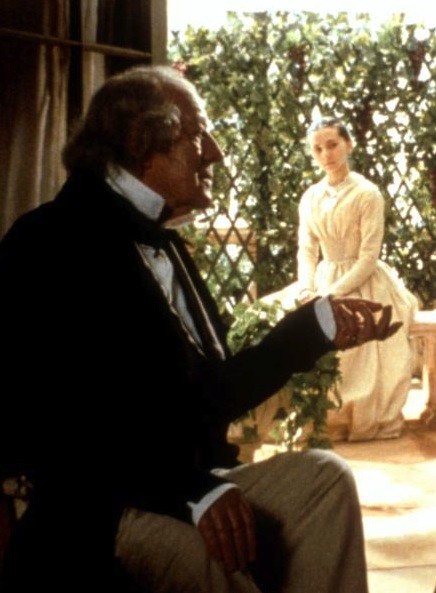 Quiet and obedient, Amy Dorrit (Sarah Pickering) sits in the background as her father William (Alec Guinness) enjoys his return to polite society in the second part of director Christine Edzard's 1988 adaptation of Little Dorrit.


On this day (April 2) in 1836, Charles Dickens married Catherine Hogarth. In 2012, actress Miriam Margolyes marked the 200th anniversary of the great English novelist's birth by taking her one-person show, Dickens' Women, around the world. Inspired by the 19th-century writer's custom of going on tour to offer the public "readings" from his novels, her work is performed as a lecture, during which she offers her thoughts on the man, along with dramatic portrayals of 23 of his characters. During her show's stop in Vancouver, I learned that the author that London's Sunday Telegraph credits with having "invented Christmas" was about as likeable as Scrooge before his meeting with the ghosts. Though a fan of the novels, Margolyes can't help but skewer their creator, a complex creature who was "capable of deep compassion and sharp cruelty, of miserable insecurity and staggering conceit." In the introduction to the book containing her play's script, Margolyes notes that a Dickens woman was either "the unobtainable sexual object, the pre-pubescent idealized woman (or) the grotesque who was both comic and frightening." She quotes Dickens's daughter, Kate Perugini, who said "my father never understood women." It is ironic, then, that one of the best screen adaptations of a Dickens novel was written and directed by a woman. Alec Guinness, who was born on this day (April 2) in 1914, starred as the luckless father of the title character in Christine Edzard's 1988 feature Little Dorrit.

Friday, Mar 24, 1989.
LITTLE DORRIT: Part 1, Nobody's Fault; and LITTLE DORRIT: Part 2, Little Dorrit's Story. Adapted from the 1855-1857 magazine serial by Charles Dickens. Music arranged by Michel Sanvoisin, based on themes by Giuseppi Verdi. Written and directed by Christine Edzard. Combined running time: 357 minutes. General entertainment. HE REMEMBERS THE NIGHT that "little" Amy Dorrit (Sarah Pickering) came to visit. It was cold. He had no fire. She was at pains to explain about her friend, Maggy (Pauline Quirke), an adult with a child's mind.
She, too, remembers.
As she spoke, Arthur Clennam (Derek Jacobi) solicitously stoked the fire. She was at pains to explain about her brother and to thank Clennam for his anonymous kindnesses to her family.
For years, their separate lives have intersected. As in life, they recall shared moments in similar but not quite the same ways.
Little Dorrit, writer/director Christine Edzard's double-feature-length adaptation of the Charles Dickens novel, challenges filmgoers to remember.
A daring, somewhat daunting, experiment in cinematic storytelling, the tale is told twice, first from Clennam's point of view, then again through Amy's eyes.
Part 1, Nobody's Fault, opens with Clennam, "the only child of parents who weighed, measured and priced everything," returning home to London.
It is early in the 19th century. Quiet and obedient, Clennam has spent the last 20 of his 40 years serving his family's commercial interests in the Orient. Now, he is determined to make a life for himself.
Confronting his overbearing mother (Joan Greenwood), he announces that he's taking rooms in Covent Garden. Thoughtful and troubled by the state of the world, Clennam is bothered by the feeling that his late father "wronged someone and made no reparation."
A stranger in his own land, Clennam is our guide as we enter the complex universe of Dickens's little-read, middle-period novel. Designed to show how disparate lives can touch and be changed, it offered the reading public of its day more than 50 characters, a mob that represented every facet of British society circa 1820.
Determined to be useful, Clennam enters into a partnership with engineer Daniel Doyce (Edward Burnaham), an inventor attempting to improve the safety and efficiency of industrial machinery.
Impelled to do good, he begins making inquiries on behalf of aging William Dorrit (Alec Guinness), the father of old Mrs. Clennam's tiny seamstress, and a gentleman who has served more than 20 years in the Marshalsea debtors prison.
Part 2, Little Dorrit's Story, begins with Amy's birth in the Marshalsea. The youngest of the Dorrits, she grows up within the prison's walls. A quiet, obedient and determined child, Amy sees that her father is respected as a man of great spirit, if poor luck.
Unlike her older sister Fanny (Amelda Brown), Amy is not consumed with resentment. Unlike her older brother Edward (Daniel Chatto), she is hard-working and responsible. In short, Little Dorrit is the ideal Dickensian heroine.
A tiny, perfect woman, she loves from afar the upright, decent Arthur Clennam, a man ill suited to the times. From time to time, their stories intersect. It is during these moments — brief scenes repeated in both films — that filmgoers need pay the closest attention.
Amy's versions differ from Arthur's in subtle, significant ways reflecting her character and viewpoint. In setting out their separate tales, director Edzard manages to represent the reality of the individuals in their own lives.
In the process, Edzard justifies the saga's six-hour running time. Together, the two features interlock, complement and comment upon one another to provide the rich, intricate portrait of an age that Dickens surely intended.
A movie designed for the age of the multiplex, Little Dorrit opens today [1989] in two auditoriums at the Royal Centre. As a result, film-goers have the option of seeing both parts on the same day, or at the same time on different days.
Rated General with no warnings, Edzard's two-part epic brings together a fine cast to realize an exciting concept. It's a movie experience worth remembering.

Afterword: With a cast of some 300 players and a running time of six hours, writer/director Christine Edzard's second feature film was a work of staggering ambition. Among those in Edzard's ensemble was Dickens scholar Miriam Margolyes, who appeared as Arthur Clennam's former fiance Flora Finching. Edzard included Margolyes in her next two features — an original Victorian melodrama called The Fool (1990) and her modern-dress adaptation of Shakespeare's As You Like It (1992) — as well as her 3D special-venue short subject The IMAX Nutcracker (1997).
Little Dorrit received two Oscar nominations: nods to Edzard for her adapted screenplay and actor Alec Guinness for his performance as Amy Dorrit's father William. It was the sixth nomination for the veteran British player, who had made his screen debut 42 years earlier as Herbert Pocket in David Lean's adaptation of Dickens's Great Expectations (1946). The twist in the tale is that it was Guinness himself who wrote the first stage adaptation of Great Expectations. Lean saw the 1939 London production in which Guinness played the Pocket role. It was the pre-war show that inspired the post-war film. Lean subsequently cast Guinness as Fagin in Oliver Twist (1948), while Lean's frequent writing collaborator Ronald Neame hired him to play Jacob Marley in that director's musical adaptation of A Christmas Carol, 1970's Scrooge. Guinness's distinguished work in such high-powered Lean films as 1957's The Bridge on the River Kwai (his best actor Oscar win), Lawrence of Arabia (1962) and Doctor Zhivago (1965) won him lasting fame. His portrayal of Obi-Wan Kenobi in the generous George Lucas's original Star Wars trilogy (1977, 1980 and 1983) made him independently wealthy. Knighted by Her Majesty Elizabeth II in 1959, Sir Alec Guinness died in 2000 at the age of 86.