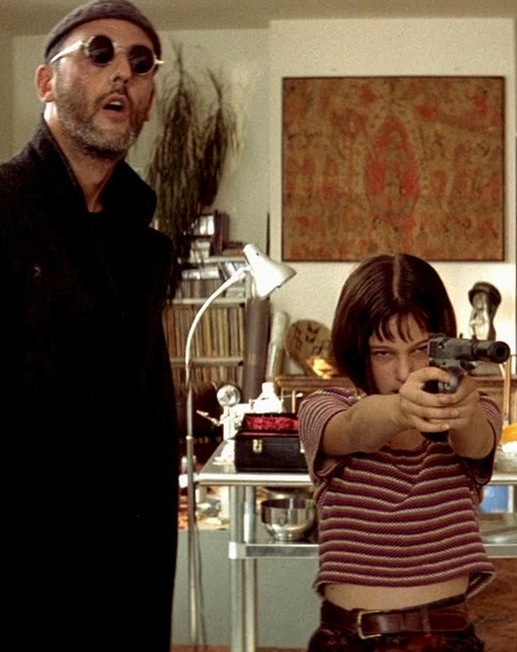 Leon (Jean Reno) teaches Mathilda Landau (Natalie Portman) the skills she will need to work as a "cleaner," in Luc Besson's 1994 urban thriller The Professional.


They grow up so quickly. It seems like only yesterday that nine-year-old Tatum O'Neal was charming us with her pre-teen grifter skills in 1973's Paper Moon (1973). At ten, she was the youngest-ever recipient of the supporting actress Academy Award. Then there was 13-year-old Linda Blair, who scared us all spitless with her talent for projectile vomiting in The Exorcist (1973). (Blair was among the supporting actress nominees who lost to O'Neal that year.) Precocious Jodie Foster, 13, was an Oscar nominee for her role in 1976's Taxi Driver. Her genuinely disturbing performance as a child prostitute seems to have inspired an unhinged fan name John Hinckley to attempt a presidential assassination in her honour. Six-year-old Drew Barrymore was a cute scene-stealer in 1982's E.T. The Extra-Terrestrial. (A rebellious teen, at 19 she was the attention-grabbing subject of a Playboy magazine nude photo shoot.) More controlled was the career trajectory of Jennifer Connelly, the beautiful, 14-year-old star of the Muppet-style fantasy Labyrinth (1986). Her supporting actress win came in 2002 (for A Beautiful Mind). Finally, there's Natalie Portman, born on this day (June 9) in 1981. A best actress Oscar winner in 2011 (for Black Swan), she made her film debut at 12, creating an indelible impression as the pragmatic New York orphan who apprentices herself to Leon: The Professional (1994).

Sunday, November 20, 1994.
THE PROFESSIONAL [French release title: LEON]. Music by Eric Serra. Written and directed by Luc Besson. Running time: 106 minutes. Restricted with the B.C. Classifier's warning: frequent violence. DECISIONS, DECISIONS . . .
When bloody-minded officers of the federal Drug Enforcement Agency blow away her father, stepmother, stepsister and kid brother, 12-year-old Mathilda Landau (Natalie Portman) faces a terrible choice.
She can flee the scene. Then, after laying low for about 10 years, she can look for a Specialist like Sylvester Stallone [in the movie released in October 1994] to take out the bad guys for her.
Or, she can go next door and seek help from her seedy, soulful neighbour Leon (Jean Reno). He’s The Professional, and what he lacks in well-defined musculature, he more than makes up for in dogged dedication and immediate firepower.
Mathilda has to think fast. Corrupt Norman Stansfield (Gary Oldman) and his murderous crew are counting bodies in her family's New York City apartment and are sure to notice that they’re one short.
Nasty, nasty . . .
When it comes to the old ultraviolence, few filmmakers are as simple-hearted as Luc Besson. “I’m the type who won’t harm a fly,” says the Paris-born writer-director, “and I’m very forgiving.
“But, if somebody in the street tries to knock on my daughter, I would kill the guy in five seconds. I try to be a normal human being, but I’m a beast on this part.”
Besson, an instinctive auteur, indulges in style-over-substance cinema. A comic-book buff rather than a classic movie fan, he’s said that “comics have a certain influence over my approach to narrative.”
He demonstrated his “bam-bam-bam” theory of story-telling in 1990’s La Femme Nikita. It was about an amoral punkette who is recruited for work as an assassin by a secret French government agency.
Besson does it again in The Professional. His first English-language picture, it features a scene in which the newly orphaned Mathilda asks sinister, sympathetic Leon “what exactly do you do?”
“Cleaner,” he says. (Actor Reno turned up near the end of Nikita’s tale as Victor, a professional killer identified as “the cleaner.”)
“You mean you’re a hit man?” (And how. In The Professional’s opening scene, stealthy Leon wipes out six heavily armed men for his Italian-American boss.)
“Yeah,” he admits.
“Cool,” says Mathilda appraisingly. A survivor, the child decides that contract murder is a trade with a future in modern America. She insists that Leon accept her as an apprentice.
There‘s no denying the ghastly fascination in Besson’s modern-dress fairy tale. It’s an urban Jungle Book with a female Mowgli, and screen newcomer Portman is entirely compelling as the vengeance-driven child-woman.
So, too, actor Oldman, irredeemably evil as the drugged-out drug enforcer. One could develop a fine, entirely valid Marxist interpretation of Besson’s nihilistic thriller as proletarian psycho-drama.
One could also dismiss it as one more example of an anti-authoritarian film-maker passing off mass murder as an art form. His bam-bam-bam crowd is not known for its socio-political activism, after all.
One for the mayhem market, Besson’s The Professional really is cool. It’s also junk.

Afterword: Twenty years on, my opinion of director Besson's first American feature (and the influence of comics on the cinema) has become more positive. I now believe that his bam-bam-bam crowd has more socio-political savvy than I gave it credit for back then. I also should point out that the above review was my reaction to the 1994, 106-minute theatrical release. I've since learned that a 133-minute director's cut was shown in France in 1996 (and is currently available on DVD). In the extended version, there is a scene in which the child-woman Mathilda asks Leon to have sex with her (he refuses). I don't know how I would have reacted to that at the time, but I'm now willing to concede that the scene just might serve a valid narrative purpose. Disturbing, yes, but he did refuse, after all.

See also: Read my opinion of Drew Barrymore's performance in E.T. The Extra-Terrestrial, and check out the Jennifer Connelly career summary that follows my review of Labyrinth.