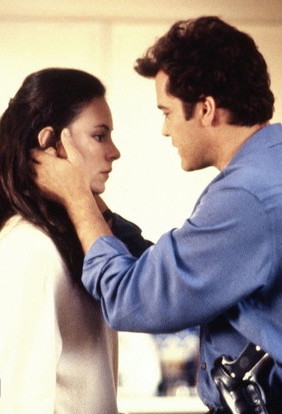 Officer Peter Davis (Ray Liotta) goes out of his way to convince housewife Karen Carr (Madeleine Stowe) that the policeman is her friend in director Jonathan Kaplan’s 1992 feature Unlawful Entry.

Giving in to the rage


To serve whom? To protect what?


The policeman is your friend. That, at least, is what the good folk who created today’s (January 9) National Law Enforcement Appreciation Day would have us believe. Founded in 2015 by a Missouri-based organization called Concerns of Police Survivors (C.O.P.S.), its stated purpose is to show police officers “that the difficult career path they have chosen is recognized by the people who they protect and uphold the law for.” Aware of the counter narratives promoted by such movements as Black Lives Matter, C.O.P.S. has taken the initiative “to change this negative portrayal of police officers in the news in recent years into a positive one.” Their campaign suffered something of a setback in May 2020 when a white cop named Derek Chauvin was photographed killing the non-resisting black man George Floyd on a Minneapolis street. In May 2021, a jury found Chauvin guilty of murder. Despite the best efforts of blue-line boosting television franchises like CSI, Law & Order and Chicago, issues of police brutality, militarization, systemic racism and institutional corruption just won’t go away. For the most part, feature films have favoured the pro-cop point of view. But not always. Today's five-feature package includes director Jonathan Kaplan's 1992 attempt at a serious examination of the "rogue cop" phenomenon. In it, Ray Liotta plays an unhinged suburban officer set off by an Unlawful Entry.

UNLAWFUL ENTRY. Written by Lewis Colick and Ken Friedman. Based on a story by George Putnam and John Katchmer. Music by James Horner. Directed by Jonathan Kaplan. Running time: 112 minutes. Restricted entertainment with the B.C. Classifier’s warning: "frequent gory violence, occasional nudity and suggestive scenes." HOW DEEP IS YOUR RAGE?
To find out, take this simple test based on a situation that's key to the plot of the unsettling, ultimately disappointing new movie Unlawful Entry. Imagine yourself in the position of white, well-off Los Angeles homeowner Michael Carr (Kurt Russell).
Two nights ago, you stood helpless in your kitchen while an intruder held a knife to the throat of your beautiful wife Karen (Madeleine Stowe). Though he did not hurt her physically, he left you both petrified.
Tonight, friendly police officer Peter Davis (Ray Liotta) takes you to a parking lot and produces the burglar, a black man named Ernie Pike (Johnny Ray McGhee). The cop offers to hold him for you. Do you:
a) Beat the miscreant to a bloody pulp?
b) Wimp out in total confusion?
c) Insist that the cop read the accused his rights so as not to further compromise the arrest?
How deep is your compassion?
When you dither, Davis clubs the man senseless. Do you:
a) Protest vigorously, following through with a formal complaint against the officer?
b) Wimp out, quietly resolving to distance yourself physically and socially from this guy?
c) Make it your personal responsibility to help a basically decent cop that you can see is "a little too tightly wound"?
Director Jonathan Kaplan would like to see more compassion. In Unlawful Entry, he introduces us to the courteous, caring Officer Davis. Remember Mom and Dad telling you "the policeman is your friend"?
If that's so, the reverse must also be true. You must be the policeman's friend.
On behalf of compassion, Kaplan asks: "Citizen, what do you do when your friend is in trouble?"
Citizen Carr, a superficial, backslapping jerk, fails his test, choosing answer (b) twice.
No friend, he must be an enemy. Davis represents every tired, demoralized cop who's ever come off a dirty shift asking himself: "To serve whom? To protect what?"
At his best, Kaplan is capable of effective, socially committed filmmaking. The Accused,  the Jodie Foster vehicle filmed in Vancouver, is his best work to date.
An alumnus of the Roger Corman school, Kaplan falls back on his old exploitation movie skills here. Unlawful Entry pushes its "tightly wound" cop over the edge with unseemly haste.
Thereafter, we're in familiar killer territory. Recent films like 1990’s Pacific Heights and The Hand That Rocks the Cradle (1992) come to mind, as our villain sets out to destroy Carr and claim his wife.
Lost among the conventional endangered-householder shocks is any sympathy for the devils tormenting men broken in the service of communities filled with rage rather than compassion. Though actor Liotta — last seen as a dedicated doctor in the 1992 hospital drama Article 99 — brings a sense of real tragedy to his character, Unlawful Entry ends up no better than ordinary.

Afterword: Though it was a mainstream feature meant to be taken seriously, I couldn’t help but see director Jonathan Kaplan’s 1992 feature as an extension of a late 1980s exploitation genre that featured decidedly unfriendly policemen. Titles such as 1988’s Maniac Cop, Psycho Cop (1989) and their various franchise sequels come to mind. To be fair, the subtext of Kaplan’s picture does turn the idea of “to serve and protect” on its head. Before moving into its tale of inappropriate courtship, Unlawful Entry shows us the raw racism that minority communities face daily from their supposed protectors. It wimps out by portraying Officer Davis as a “bad apple” rather than the natural product of a law enforcement system gone bad. Thirty years later, “appreciation” for law enforcement is a contentious issue, one very much dependent on your colour and position on the socio-economic ladder.