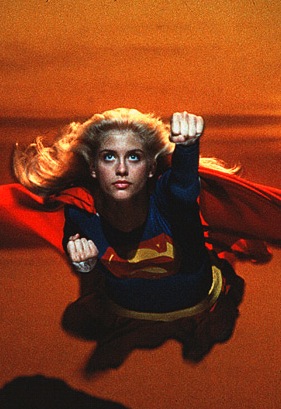 
In August 1958, 20 years after her comic-book cousin Kal-El's debut, Kara Zor-El took flight in Superman issue #123. "The Girl of Steel" then became a movie star, in the 1984 feature Supergirl.

Wednesday, January 4, 1985.
SUPERGIRL. Written by David Odell. Based on the DC Comics character created by Otto Binder. Music by Jerry Goldsmith. Directed by Jeannot Szwarc. Running time: 105 minutes. Mature entertainment. SUPERGIRL? THEY'VE GOT to be kidding. We all saw Krypton blown away in the first Superman movie.
KAA-blooooey!  The whole planet went up like Alderaan. No one who wasn't already in a little rocket on the way to Earth could possibly have survived — which was more or less the point that Jor-El (Marlon Brando) made to the Council before rushing home to pack off his infant son Kal-El.
The Salkinds don't play fair. At least the comic book writers had the decency to wait a full generation before concocting Argo City, the Kryptonian fragment that is home to Jor-El's brother Zor-El (Simon Ward), and Kal-El's teenaged cousin Kara (Helen Slater).
It never made sense but, with three Superman features already in release, the father-son production team was tooled up and more interested in maintaining momentum than logic. To launch Supergirl, they hired director Jeannot (Jaws II) Szwarc and told him to make them another one, just like the other ones.
Incredibly, the Salkinds seem to have neglected to tell him precisely what "other ones'' they meant. Szwarc, after reading David Odell's screenplay, obviously decided that his picture was supposed to be a continuation of the Disney Studios' Medfield College trilogy, specifically The Computer Wore Tennis Shoes (1970), Now You See Him, Now You Don't (1972) and The Strongest Man in the World (1975).
Forgive him for an honest, if ghastly, mistake. When blonde mini-skirted Kara Zor-El pops out of "inner space," she is not far from Midvale, Illinois, where she assumes the identity of brunette, bespectacled Linda Lee, a private girls' school student.
Her roommate at this Medfield-like institution is Lois Lane's spunky kid sister Lucy (Maureen Teefy). Her major conflict is with an ambitious apprentice witch named Selena (Faye Dunaway), who has a plan for world domination that involves black magic.
Remember Dexter Riley (Kurt  Russell)? In Disney's gimmick comedies, good-hearted old Dex was always whipping up something that made him super-strong, or invisible, or super-smart. It was an excuse for funny special effects and wasn't required to make sense because it was just factory-made, brand-name, formula fantasy fare.
Since Kara/Linda Lee's story uses the same essential ingredients, and is aimed at an essentially juvenile audience, Szwarc was able to stamp it out of the old mold. The result is the sort of mindlessly undemanding entertainment best suited to children's matinees.

Afterword: Though Jerry Goldsmith's symphonic score did its best to make her soar, Supergirl landed with a great thud at the boxoffice. As much as we wanted to love her, actress Helen Slater's feature film debut was less than stellar, and her subsequent career consists mainly of made-for-TV movies and series guest-star roles (including a 2009 visit to Vancouver to appear in a Supernatural episode). Toronto-born Laura Vandervoort had a better time of it, playing Kara Zor-El with considerable style in 23 episodes of TV's long-running Smallville series. Mindful of Slater's place in Kryptonian screen mythology, the Smallville producers asked her to guest star as Kal-El/Clark Kent's biological mom Lara-El. She accepted, and played the role in three episodes.