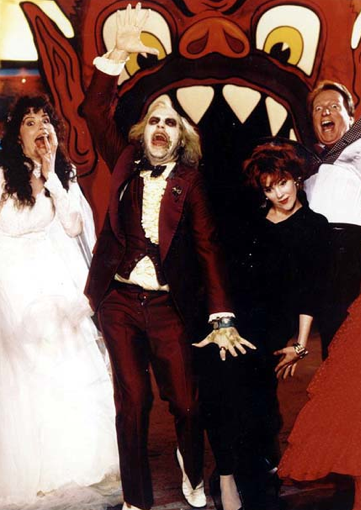 
Hellzapoppin' fun in the Hereafter


BEATLE JUICE! On this day (March 4) in 1966, English pop star John Lennon was quoted in a London Evening Standard interview as saying "We're more popular than Jesus now." The thoughtful Beatle's theological musings caused a considerable stir in the American Bible belt and, in 1980, Lennon was shot dead by a deranged fan who may have thought the pop star was dissing "Jodie." BETELGEUSE! Also on this day, but in the year 1774, the German-born church organist William Herschel first sighted the Orion nebula. An accomplished amateur astronomer who built his own telescopes, Herschel would have been drawn to that part of the night sky by the bright star Betelgeuse, the twinkling red supergiant in the constellation Orion. BEETLEJUICE! Born on this day in 1954, SCTV alumna Catherine O'Hara is back in Toronto where she is co-starring in the current CBC-TV comedy series Schitt's Creek. An accomplished team player, O'Hara is an integral part of the stock company that director Christopher Guest gathers together for such feature mockumentaries as Best in Show (2000) and A Mighty Wind (2003). Her Hollywood breakthrough came in 1988, playing a featured role in a much-loved haunted-house comedy. And now, having said its name three times, Reeling Back is committed to an appearance of director Tim Burton's tale of bio-exorcism, 1988's Beetlejuice.

Thursday, March 10, 1988
BEETLEJUICE. Written by Michael McDowell, Larry Willson and Warren Skaaren. Music by Danny Elfman. Directed by Tim Burton. Running time: 90 minutes. Mature entertainment with the B.C. Classifier's warning: occasional very coarse language. "BEETLEJUICE." ACCORDING TO THE Junior Woodchucks' Guide Book, this is the proper pronunciation of "Betelgeuse," a star that astronomy buffs will recognize as the first-magnitude red giant in the constellation Orion.
Beetlejuice. According to an advertising flyer tucked into The Handbook for the Recently Deceased, an entity named Betelgeuse (Michael Keaton) is available to perform a variety of services for those having difficulty adjusting to the Afterlife.
The Maitlands, Adam (Alec Baldwin) and Barbara (Geena Davis) are past having an interest in astronomy. Following a freak accident on their way home from town, the young marrieds discover a copy of the post-mortem Handbook in their picturesque New England hilltop house.
"You know," Barbara says thoughtfully, "I don't think we survived the crash."
What's worse, it looks as if their beloved 200-year-old American Gothic home won't survive its new owners. The moment that trendy urbanite Delia Deetz (Catherine O'Hara) sets foot in the place, she begins to plot Manhattan-style renovations.
The gentle ghosts are horrified. When their own home-grown attempts at haunting fall flat, they consider calling in an expert, the unpredictable, self-advertising "bio-exorcist" Betelgeuse.
Fantasy fans (and that includes most of the school kids now enjoying their spring break) can rejoice. Director Tim (Pee-wee's Big Adventure) Burton has come up with an imaginative new approach to horror comedy.
In Beetlejuice, the former Disney animator manages to combine the hip, cartoon-style humour of Gremlins and Ghostbusters (both 1984) with the period charm of the Topper series (three pre-Second World War feature films and a 1953 TV series). The results are right on target for both teens and the traditionalists.
Like George and Marian Kirby, the Maitlands are an attractive couple sent to the Beyond before their time. Informed by the Handbook that "live people ignore the strange and the unusual," they're surprised that the Deetz's daughter Lydia (Winona Ryder) is able to see them.
"I am strange and unusual," the black-clad, theatrically tragic child tells them. A sensitive, Lydia becomes the Maitland's ally in their fight with her parents, Delia and Charles (Jeffrey Jones), and ultra-urbane interior decorator Otho (Glenn Shadix).
As it turns out, Lydia is also the anarchic Betelgeuse's kind of girl. An obnoxious spook, he'll combine his "bio-exorcism'' — a casting out of the living — with a gleefully gross courtship.
Credit screenwriters Michael McDowell and Warren Skaaren with thinking through their ideas. When a self-proclaimed occult expert tells Lydia that "in the Hereafter (suicides) become civil servants," it's a funny line.
What's more, it's consistent within the story, not only explaining the problems the Maitlands have with their other-worldly case worker Juno (Sylvia Sydney), but inspiring a series of effective sight gags in the Hereafter sequences.
Flip and funny, multi-layered and richly allusive, Beetlejuice is the year's first flat-out comedy hit.

Afterword: Tim Burton established himself as a major directorial talent with his second feature film, the critically and financially successful Beetlejuice. An artist loyal to his collaborators, he went on to cast Michael Keaton in the title role of his even more successful Batman (1989) and its sequel, Batman Returns (1992). When Burton wrote and produced director Harry Selick's animated The Nightmare Before Christmas (1993), he called on Catherine O'Hara to provide the voice of Sally, its female lead. In 2012, O'Hara was top-billed in Burton's Oscar-nominated animated feature Frankenweenie. And then there was that moment at the end of last week's 2015 Academy Awards broadcast, when Alejandro González Iñárritu, the producer-director of the best picture winner Birdman, asked his leading man, Michael Keaton, to say a few words. The actor began with the polite, pro forma nod to his director. “This has been a tremendous experience. This guy is as bold as bold can be . . . " Then, suddenly, Keaton went full Betelguese.  " . . . look, It's great to be here, who am I kidding?” In that moment, he managed to remind us how much we'd enjoyed his previous great performance and, perhaps, whet our appetite for his return to the role, if and when Burton's promised Beetlejuice 2 finally goes before the cameras.