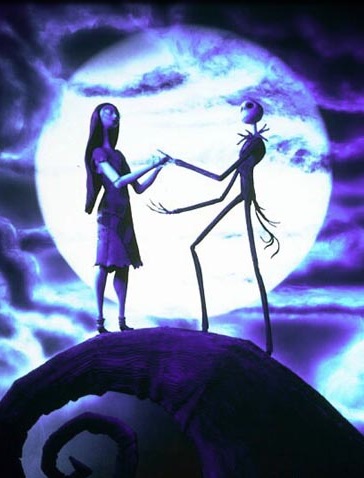 Off to Halloween Town


Tim Burton thought up this puppet-animated take on classic Christmas depression. Together with his musical collaborator Danny Elfman, he produces a tuneful case for celebrating Hallowe'en as The Nightmare Before Christmas.

Friday, October 22, 1993.
THE NIGHTMARE BEFORE CHRISTMAS. Written by Caroline Thompson. Based on a story and characters by Tim Burton. Music, lyrics and score by Danny Elfman. Directed by Henry Selick. Running time: 84 minutes. Mature with the warning "may frighten young children."
'Twas  The Nightmare Before Christmas,
And all   through the  screening,
I hear children's  laughter;
No  one  is  screaming.

WHICH IS NOT to say that parents should disregard the B.C. classifier's "may frighten young children" warning. Some kids are more sensitive to dark visions than others, and it's up to Mom and Dad to decide the nightmare threshold of their own wee ones.
Even so, a visit to producer Tim Burton's Halloween Town is more likely to delight those who have grown up twisted, victims of our market-driven mass media and consumer-oriented pop culture. Together with his wonderfully talented creative collaborators, the Batman and Beetlejuice man has created the season's In movie for self-aware outsiders.
Part rock opera, part toy-shop window display, their Nightmare is an ingenious, puppet-animated take on classic Christmas depression. Like the Mr. Boffo comic strip, it's full of good people unclear on the concept.
It opens in an archetypal Wood Between the Worlds. Six trees are arranged in a circle, each one an entrance to a different holiday land.
Our first stop is Halloween Town, where Pumpkin King Jack Skellington (speaking with the voice of Chris Sarandon) organizes the annual fright night celebrations. Despite his success, Jack is a troubled soul.
"There's an empty place in my bones / that calls out for something unknown," he sings (with the voice of Danny Elfman) during a solitary walk beneath a full moon. His wandering brings him to the grove where he discovers the door to Christmas Town.
Thoroughly charmed by what he sees, Jack returns to his own world determined to share his vision with its comic-creepy citizens. Unfortunately, it loses something in the translation.
With the best intentions, Jack decides to "borrow" Christmas. "How horrible our Christmas shall be," enthuses the town's Mayor (Glenn Shadix), foreshadowing the confusion to come.
Though Burton conceived the story and its characters, he shares credit with a group of long-time friends. Adaptation of his ideas was done by Beetlejuice co-writer Michael McDowell, and the screenplay produced by Caroline (Edward Scissorhands) Thompson.
The most impressive contribution, though, is made by Burton's musical alter ego Danny Elfman. A tunesmith on a par with Andrew Lloyd Webber, Elfman's songs, score and personal performance turn the show into the tale of Jack O'Lantern, Superstar.
Director Henry Selick, a Burton co-worker in the Disney animation department circa 1979, shares his fascination with pop culture and translates his friend's ideas to the screen with style, wit and vigour.
Filmgoers who liked Beetlejuice (and all those other movies in which Winona Rider does her weird kid number) will love Nightmare's soulful Sally (Catherine O'Hara), the patchwork girl who loves Jack from afar.
Sally is the "creation" of the town's Frankenstein-like mad scientist (William Hickey), who looks like a cross between Dr. Strangelove and Howard the Duck. The villain of the piece, bogey-man Oogie Boogie (Ken Page), borrows his attitude from Little Shop of Horrors' mean green mother from outer space.
Then, there's Jack himself. His slim lines and hairless head recall the friendly alien from Steven Spielberg's Close Encounters of the Third Kind.
That's just right, given that Burton has become the Spielberg-like force for entertainment innovation in the post-E.T. generation.

AFTERWORD: There's only one answer to the question "is this a Christmas film or a Hallow'een film?"
Yes.
Christmas, as the "war-on-Christmas" protestors remind us, has been hijacked by the commercial retailers and turned into a month-long marketing festival. For many of us, the Christmas Spirit has become a nasty, guilt-tripping Ghost. Is it any wonder, then, that Hallowe'en has been embraced by ordinary folk and turned into a happy, mildly transgressive celebration of life/death? Who wouldn't want to escape Santa's surveillance state ("he sees you when you're sleeping / he knows when you're awake") with its implied punishments ("he knows when you're been bad or good / so be good for goodness sake"). Unfortunately, in the generation since Jack Skellington danced into our hearts, the deadly grip of the mass-marketers has fastened upon All Hallow's Eve, attempting to turn it into a weeks-long revenue stream. Hallowe'en specialty stores now seem to spring up everywhere on the 1st of October.  And there's only one answer to the question "is this a good thing or a bad thing?"
Yes.