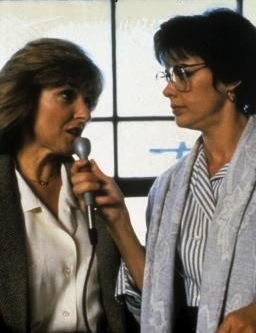 
Ciné excellence has a Québec accent


On this day (February 29) in 2004, Quebec director Denys Arcand's The Barbarian Invasions won Canada's first Academy Award in the foreign-language film category. It was the middle entry in his sophisticated trilogy that began with The Decline of the American Empire (1986).

Thursday, September 25, 1986.
LE DÉCLIN DE L'EMPIRE AMÉRICAIN (The Decline of the American Empire). Music by François Dompierre. Written and directed by Denys Arcand. Running time: 101 minurtes. Restricted entertainment with the B.C. Classifier's warning: frequent suggestive scenes, some nudity. In French with English subtitles. WASN'T THAT A PARTY?  Good food, some wine, good friends, some lovers and a lot of good talk.
The talk was the best part, even if it did annoy Mario (Gabriel Arcand). Remember how he just sat there at the dinner table with a huge chip on his shoulder and nothing to say?
Finally, he lost his temper, made an ugly scene and left. But what could you expect? He wasn't part of the group, really, just some rough trade that Diane (Louise Portal) had taken up with, her idea of a new thrill.
Denys Arcand throws a heck of a party. When Arcand, one of Quebec's most interesting and intense filmmakers, holds a get-together, the result is a striking, memorable movie.
In Réjeanne Padovani (1973), the last Arcand feature to have a commercial release in Vancouver, our host was Victor Padovani (Jean Lajeunesse), a Montreal businessman who benefits from both his political and criminal connections. Effectively blending1969's Z with The Godfather (1972), Arcand used a house party as the focal point of an angry, accomplished tale of contemporary corruption.
In the currant Le déclin de l'empire américain (The Decline of the American Empire), Arcand's anger gives way to a sophisticated despair. Set on the shores of picturesque Lake Memphremagog, it offers filmgoers the kind of toujours gai intellectual fatalism that delights and entertains with its witty resignation to the pleasures of the flesh.
"I know I'll never be a Toynbee or a Braudel," sighs Pierre (Pierre Curzi), a womanizing Montreal history professor. "All I have left is sex."
Sex, it seems, preoccupies everyone in sight.
During his film's first hour, Arcand introduces us to four women — radio reporter Diane, feminist historian Dominique (Dominique Michel), faculty wife Louise (Dorothée Berryman) and graduate student Danielle (Geneviève Rioux) — as they chat together in the university health club.
We also meet their male friends, history professors Pierre, Rémy (Rémy Girard) and Claude (Yves Jacques) and graduate student Alain (Daniel Brière). The men are already at the lake house, involved in meal preparation and their own conversations.
In both places, sex is the subject, as the individuals dicuss performance, practices and overall philosophies.
No Porky's, Arcand's sharply observed feature is aimed at adult audiences. It has already scored on the festival circuit where, in May [1986], it won the International Association of Film Critics Award at Cannes.
Earlier this month, it collected the Best Canadian Film prize and was voted Most Popular Film  at Toronto's Festival of Festivals. Published reports indicate that Arcand is now negotiating with Hollywood studio moguls who want him to remake his picture in English for the American mass audience.
The excitement is based on the fact that the writer-director has managed to create a yuppie-oriented relationship movie with universal resonance and enough of an academic air to stroke, rather than insult, an educated audience's intelligence. At Arcand's  party, the guests talk in full, often eloquent sentences, allowing filmgoers to feast on the sort of rich, polished dialogue that so few films offer these days.
Especially impressive is the fact that the quality of the screenplay is evident in the subtitles. Crisp and felicitously written, they give a non-francophone filmgoer the feeling that he isn't missing a thing.
Making the picture an event is Arcand's ability to layer meanings into his screenplay. On the surface, it is a slickly conceived comedy-drama in the style of 1983's The Big Chill, bringing together a selection of urban sexual types, attitudes and approaches.
Visible beneath the surface (and accessible to most audiences) is a layer of broad social commentary. "Our quest for personal happiness is linked to the decline of the American empire,'' guest expert Dominique explains for the benefit of Diane's Radio-Canada listeners.
So too, it emerges, is the aging process affecting these members of the baby boom generation.
Finally, at the core, is a tale likely to be appreciated by Canadians only. Here, Arcand shows us one face of post-referendum Quebec, and comments with Rabelaisian resignation on the state of Canada's subsidy-dependent cultural establishment.
The Decline of the American Empire offers strong ensemble playing and a wicked emotional appeal. Arcand throws the sort of party you don't want to miss.

Afterword: In 1987, Le déclin de l'empire américain became the first Canadian feature nominated for a U.S. Academy Award in the foreign language film category. (It lost to Dutch director Fons Rademakers' The Assault, a story of Second World War resistance fighters.) Its 2003 sequel, Les invasions barbares (The Barbarian Invasions), earned Arcand an Oscar nomination for his original screenplay, and won the foreign language film Academy Award. Needless to say, both films were recognized by the Academy of Canadian Cinema. Déclin won nine of the 13 Genies for which it was nominated, including those for best picture and director. Sixteen years later, Invasions managed a similar sweep, winning six Genies out of  nine nominations, with picture and director among the wins. Chatter in the trade press notwithstanding, the English-language remake of Déclin ended up in turnaround, Hollywood-speak for "not gonna happen."
In 2007, Arcand completed his "reflection on morals and life in our times" with a third film, L’Âge des ténèbres (The Dark Ages). Though as daring as his earlier films, it was less well received. Nominated for four Genies, it was the also-ran in a year that saw first-time feature director Sarah Polly the centre of excitement as her accomplished drama Away from Her swept up all the top prizes.

See also: The first Canadian to bring home an Academy Award for a feature film was Ottawa producer F.R. "Budge" Crawley. His independently produced The Man Who Skied Down Everest was a winner in the feature documentary category. Crawley accepted his Oscar at the March 29, 1976 award show, joking to the TV cameras that "this is an American award for a Canadian film about a Japanese skier who skied down a Nepalese mountain."