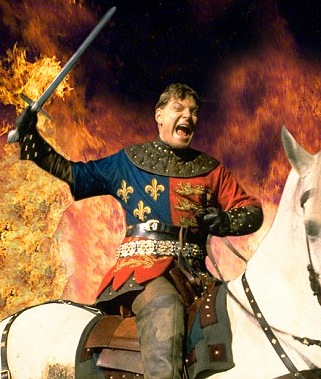 Most royally did actor-director Kenneth Branagh lead the charge into a glorious new era of cinematic Shakespeare, beginning with his 1989 adaptation of Henry V.


Restoring the blood and doubt to Will's work


Now here's a merry coincidence. Among those born on this day (July 11) was one Dr. Thomas Bowdler, whose name would become synonymous with censoring Shakespeare. Among those to die on this day was Lord Laurence Olivier, who won his title for performing Shakespeare. Bowdler (1754-1825), one of those rare individuals whose name became a verb, was the publisher of 1807's The Family Shakespeare, an edition of the Bard's works made family-friendly by the expurgation (or bowdlerization) of all the naughty bits. (The actual editing was done by Bowdler's big sister Harriet, a member of England's influential Blue Stocking Society.) Lord Larry (1907-1989), the first actor to be elevated to the peerage, was best known for his screen adaptations of Henry V (1944), Hamlet (1948) and Richard III (1955), movies that he both directed and starred in. A founder of the National Theatre Company, he is remembered as one of the 20th century's greatest actors. You'd hardly think that the names Bowdler and Olivier belonged in the same sentence. And yet, in 1989, they came together in my review of actor-director Kenneth Branagh's own breathtaking screen adaptation of Henry V.

December 15, 1989
HENRY V. Based on the play by William Shakespeare. Music by Patrick Doyle. Adapted and directed by Kenneth Branagh. Running time: 138 minutes. Mature entertainment with the B.C. Classifier's warning: some gory scenes. THE ODDS ARE AGAINST him. "There's five to one," reports the young king's uncle, Thomas Beaufort, Duke of Exeter (Brian Blessed).
"Besides, they are all fresh."
It is the morning of October 25, 1415. Pressing his historic claim upon the French throne, England's Henry V (Kenneth Branagh) has come to the continent in arms.
On this day, the Church's Feast of Saints Crispin and Crispian, he stands with his army in a valley south-by-southeast of a castle called Agincourt. Twelve thousand English, exhausted after a long march, face a well-rested French force of 60,000.
"We few,'' says the king, rising magnificently to the occasion.
"We happy few . . . "
Some voices have been raised against it. The very idea of a of a "new" Henry V on film. Outrageous!
Lord Larry's hardly cold in his grave, and here comes some upstart Irishman with his own version of Shakespeare's epic historical drama. By adapting, directing and starring in Henry V, Belfast-born Kenneth Branagh dares to duplicate Olivier's 1944 feat.
What mischief is here?
Is it heresy?
No. It's a restoration.
And, with credit due Branagh on all counts, a damn fine one.
For the last 45 years, it has been standard practice to praise the lord. Recognizing Olivier's wartime achievement, though, should not o'ershadow the fact that the noble Laurence was a man of his time.
For Britons, it was time of national peril, one that required national legends, knights in shining armour, an heroic warrior-king. In the national interest, Olivier emulated Dr. Thomas Bowdler and excised from Shakespeare's text any dialogue, scenes, characters and subplots that did not serve his patriotic purpose.
Branagh's Henry V is an epic for our time. A complex, questioning, demandingly human drama, it is more faithful to Bard than Olivier.
Branagh has put back many of the missing bits. His brooding, thoughtful feature allows Shakespeare's monarch to show self-doubt, allows us to see the terrible duties of kingship and reflects, once again, the bloody horror of medieval warfare.
Methinks I like this Henry better. I know it's better Shakespeare.
Under Olivier's direction, the battle of Agincourt is a glorious affair. When the English longbowmen's arrows take flight, they are accompanied by Sir William Walton's soaring score.
Branagh's approach to the great battle reflects the influence of Kurosawa and, perhaps, Polanski, both of whom directed strikingly savage versions of Macbeth. During the first half of the battle, there is no music, only natural sound.
We both see and hear the first few volleys, the arrows' angry whooosh slicing through the air like a demon's scream.
Thereafter, though the camera concentrates on the details of the combat, the arrow sound occurs at regular intervals, an indication of airborne death that generates an emotional effect not unlike the thummpah-thummpah of the helicopters in Apocalypse Now (1979)
Branagh's cast, drawn from the ranks of Britain's classic stage companies, is uniformly superb. Under his direction, they give us full-blooded, full-value Shakespeare.

Afterword: In the Afterword to my review of Grigori Kozintzev's Russian language King Lear, I credited Ken Branagh for launching a "great revival of screen Shakespeare." Since making his directorial debut with Henry V, he's acted in and directed adaptations of Much Ado About Nothing (1993), Hamlet (1996), Love's Labour's Lost (2000) and As You Like It (2006). In 1989, the year of Henry V's release, Branagh married his Henry's Princess Katherine, actress Emma Thompson. They would co-star in the next three features he directed, including 1991's Dead Again and Peter's Friends (1992). In Much Ado About Nothing (1993), they made merry war as Benedick and Beatrice. The marriage ended less cheerfully, when Ken took up with his co-star in 1994's Mary Shelley's Frankenstein, Helena Bonham Carter. An eclectic cineaste, Branagh took a run at opera in 2006, directing Stephen Fry's English-language adaptation of Mozart's The Magic Flute, and at comic-book movie-making in 2011, with the special-effects show Thor.  In a second bit of merry coincidence, Branagh played Sir Laurence Olivier in the 2011 feature My Week with Marilyn, based on Colin Clark's memoir of working on the set of The Prince and the Showgirl, the 1957 film that co-starred Olivier and Marilyn Monroe. A year later, on November 9, the 51-year-old player knelt before Her Majesty Elizabeth II to become Sir Kenneth Branagh.

See also: My review of director Joss Whedon's 2013 screen adaptation of  Much Ado About Nothing.