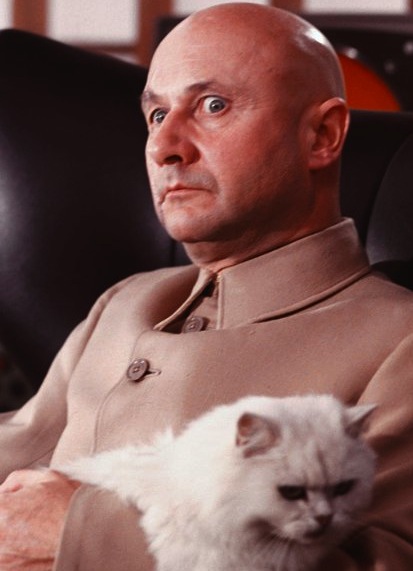 
Finding the fun in being the bad guy


In Vancouver in 1973 for the world premiere of The Rainbow Boys, a B.C.-made film in which he starred, Donald Pleasence discussed his preference for live theatre, the disappointments of film production, emerging Canadian cinema and life as a major movie villain.

OF COURSE YOU'VE SEEN Donald Pleasence in the movies. It's mostly been as the villain, though, so you may not remember his name. Some of his recent roles:
*    The Dark Hermit, otherwise known as Satan, who tempts Max von Sydow's Jesus in 1965's The Greatest Story Ever Told.
*    Dr. Michaels, the evil scientist who bad-mouths God and glares at Raquel Welch before being eaten by white blood corpuscles in 1966's Fantastic Voyage.
*    Père Louis, the French provincial curé who celebrates black masses and calls together the Council of 13 to sacrifice David Niven in Eye of the Devil (1966).
*    Ernst Stavro Blofeld, arch-enemy of James Bond, who first troubles 007 in 1967's You Only Live Twice.
*    Preacher Quint, the mad jayhawker, who tortures Charlton Heston's working cowboy Will Penny (1968).

On the more sympathetic side, Pleasence is remembered as:
*    Colin Blyth, the prison camp forger who goes blind and has to be guided through 1963's The Great Escape by James Garner.
*    Oracle, the whiskey-inspired prophet who shares his visions of whiskey-laden wagons on The Hallelujah Trail (1965).
*    George, a masochistic husband terrorized by escaping bank robbers in director Roman Polanski's Cul de Sac (1966).
*    General Kahlenberge, the "good German" who plots against Hitler in 1967's Night of the Generals.
*    Logan, the reluctant treasure hunter currently [1973] on view in The Rainbow Boys.

Afterword: Revisiting my interview with Donald Pleasence some 40 years later, my first reaction is amazement at the amount of space newspapers devoted to such features back then. I did a second interview with him just 16 months later (July 21, 1974) during the filming of director Daniel Mann's Vancouver-made feature Journey into Fear. Pleasence, who died in 1995 at the age of 75, worked steadily on stage, television and in the movies for more than half a century. I'll include more on his subsequent career when I post that second interview.