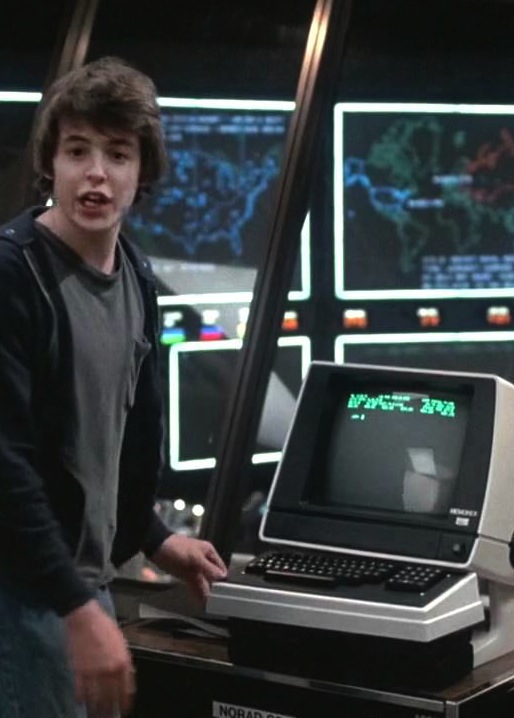 Shall we play a game?


Today (September 12), hand-eye coordination enthusiasts in the U.S. celebrate National Video Games Day, an event of somewhat dubious origin. It seems to have been created to demonstrate that Americans could do it better than those other cyber-spaceballers who observe World Video Games Day on July 8. At first glance it would seem that the internationalists selected the better date. Their party falls on the 1831 birth date of John S. Pemberton, the Atlanta pharmacist who invented Coca-Cola, the carbonated, caffeinated chemical concoction that is essential to marathon gaming sessions. The nationalists, taking themselves more seriously, linked their day to the 1900 birthday of Haskell Brooks Curry. He was a pioneer of modern mathematical logic, famous for his work on ENIAC, the first electronic computer. Recognizing that conflict was an integral part of gaming, they also linked their holiday to the September 12, 1957 creation of NORAD, the North American Air Defence Command. Headquartered in Colorado Springs, it joined the U.S. and Canadian air forces in common cause against the threat of Soviet bombers. NORAD may be best known for its annual "tracking" of a red-suited intruder into American airspace in the wee small hours of December 24-25. Its natural connection to Video Games Day was explored in director John Badham's 1983 thriller WarGames.

Wednesday, June 8, 1983.
WARGAMES. Written by Lawrence Lasker and Walter F. Parkes. Music by Arthur B.  Rubinstein. Directed by John Badham. Running times: 110 minutes. Mature entertainment with the B.C. Classifier's warning: Occasional coarse language and swearing. THE MOVIE-MOVIE HAS A new master. With two hit features currently on view locally, John Badham reaffirms his ability to make intensely entertaining, enormously marketable pictures that manage to be novel without being particularly original — a commodity known in the trade as the "movie-movie."
The director of such potent box-office attractions as Blue Thunder (1983), Saturday Night Fever (1977) and the Frank Langella Dracula (1979), Badham has learned to combine considerable flash with the barest hint of substance. Although he lacks a strong personal vision, there is no faulting his basic film-making instincts.
Like many second-rank directors, Badham is a borrower. His success is based on the fact that he borrows wisely and well, synthesizing his swipes into satisfying new shapes.
Take WarGames, for example. During its opening moments, it could be mistaken for Close Encounters of the Third Kind, as we watch men emerging from a sandstorm near a remote farmhouse.
The picture's basic premise echoes last year's Tron [1982]. Our hero, David Lightman (Matthew Broderick, last seen in Max Dugan Returns), is a teenaged electronics whiz who is able to gain entry into anybody's database with his own souped-up micro-computer.
David is always the first on his block to play the new video games, because he talks directly to the great corporate mainframes. One afternoon, he inadvertently taps into NORAD's WOPR — the North American Air Defence Command's War Operations Plan Response simulator — known to its friends as "Joshua."
When David asks to play "Global Thermonuclear War," Joshua (voice of James Ackerman) takes him seriously. Unwittingly, David has set the clock ticking for the countdown to Armageddon .
As a summer entertainment epic, WarGames is hard to beat. The FBI, noting that David is an "underachiever, alienated from his family," thinks he's involved in some kind of plot. Because he is "a classic target for Soviet recruitment," the special agents refuse to believe that he's just a kid playing games.
Soon David is on the run, desperately searching for Joshua's creator, drop-out scientist Stephen Falken (John Wood). It's a race against time to save the world from certain destruction.
To suggest substance, Badham adds a couple of borrowed messages to his mix. One — that humans must always have ultimate control over their machines — is lifted from an effective 1969 thriller called Colossus: The Forbin Project. The other — no one wins a nuclear war — has been a familiar movie message since the 1950s.
The picture's climax, a tension-filled, double-shock ending set deep within NORAD's Colorado command bunker, recycles the penultimate scene of John Carpenter's 1974 cult classic Dark Star. "No, no, Doolittle. You talk to it.
"Teach it phenomenology . . . "
That Badham puts it all together so well is a tribute to his skills as a Hollywood craftsman. What WarGames lacks in originality, it more than makes up for in old-fashioned movie magic.

Afterword: Nearly 30 years ago, I wrote a preliminary outline for a book that I intended to write "someday." Called The Silicon Screen, it was supposed to tell "the story of the computer as seen through the eyes of the world's feature filmmakers." At the time, there were "more than 100 computer-themed films already in existence," including John Badham's then-recent WarGames. Badham continued to add to the "computer-themed" list with 1986's Short Circuit and Drop Zone (1994). I continued reviewing his movies and not getting around to writing any books. Today, the subject is much larger and, arguably, much more frightening. Last month, an opinion piece in Britain's Guardian newspaper noted that some of the biggest names in science and technology — among them Stephen Hawking, Elon Musk, Steve Wozniak and Bill Gates — have issued warnings about the future of artificial intelligence (AI). With real-world experts echoing the dark vision of James Cameron's Terminator films, I have to wonder if my book idea isn't past its best-before date.