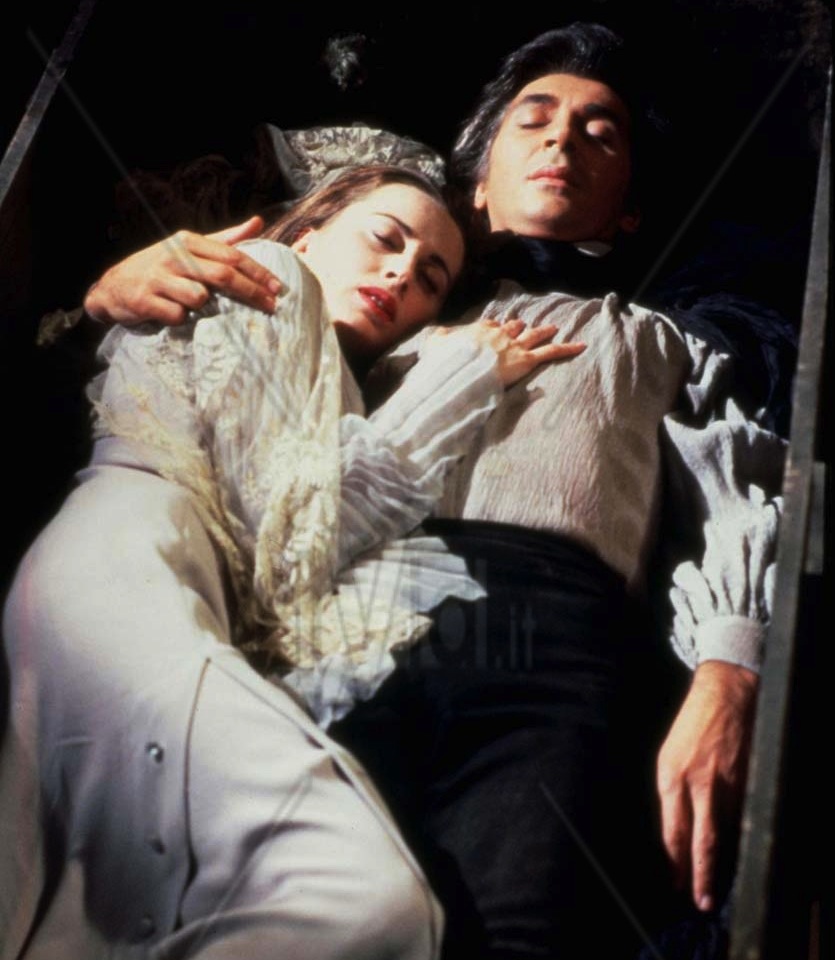 Self-liberated woman Lucy Seward (Kate Nelligan) insists that her choice to be with Dracula (Frank Langella) was made "of my own accord."


In his own day, Abraham "Bram" Stoker was best known as the personal assistant of English actor-manager Henry Irving. Today (Nov. 8), on the 166th anniversary of his birth, we remember the Irish-born newspaperman and theatre critic as the author of the influential gothic novel Dracula. Confident that he had a hit on his hands, the 50-year-old novelist wrote a theatrical adaptation (Dracula, or The Undead) for the purpose of establishing stage copyright. It was performed at Irving's Lyceum Theatre eight days before the novel's publication in 1897. In the new century, his widow successfully sued the makers of an unauthorized silent film adaptation, 1922's Nosferatu. In 1924, the Stoker estate granted adaptation rights to English playwright Hamilton Dean for his Dracula, The Vampire Play. Revised for American audiences by John L. Balderston, it opened on Broadway in 1927 with Bela Lugosi in the title role. It also was the basis for the 1931 screen version that made Lugosi a horror film star. In 1977, a second Broadway revival starred Frank Langella. Again, a successful stage actor took his performance to Hollywood — for the 1979 Dracula remake that we're now recalling on Reeling Back.

"A busy studio like Universal can be awfully anonymous . . . but Badham had almost a family feeling for the place."
— Universal Studios press release

AND SO HE SHOULD. The success of his last film (Saturday Night Fever) notwithstanding, John Badham is still a rookie director.
If it wasn't for his "family," the studio's artists, craftsmen and technicians, Badham's Dracula couldn't have got past the distributor's door. On his own, the British-born director would have turned out a Saturday matinee stinker, a picture suitable only for drive-in multiple bills and non-network television stations.
Badham can thank the old pros — John Williams, Peter Murton, Gil Taylor, John Bloom and Al Whitlock. While he was off taking tea with Lord Laurence Olivier, they got together and saved his movie, if not his career.
Badham's problem is one of control. He has none. After directing a bunch of twitchy nondescripts on the sidewalks of New York, he found himself facing a corps of acting powerhouses, all with solid legitimate theatre credentials.
Apparently the experience so unnerved him that he decided to just stay the hell out of their way. Studio assurances aside, there is no firm evidence that Dracula had any direction at all.
Oft filmed, Dracula is the creation of 19th century Irish author and playwright Bram Stoker. The prince of vampires, he hails from Transylvania. Stoker's original novel, published in 1897, chronicles the undead aristocrat's visit to Britain, his brief reign of terror and his flight back to the Carpathian Mountains.
Frank Langella, who plays the title role in this version, rehearsed the role in a 1977 Broadway revival. His interpretation — a minimally accented, sensitively romantic vampire — had already won rave reviews from theatre critics, so he wasn't about to change a winning formula.
Olivier, as the vampire's nemesis, Professor Abraham Van Helsing, is another story. The 72-year-old actor could replace Dracula as king of the undead. Lord Larry hasn't varied his performing style for at least three movies. He plays the 19th century Dutch doctor with the same accent and mannerisms he used as an Austrian Nazi Hunter (The Boys from Brazil), and a French boulevardier (A Little Romance). Wind up the Olivier doll and he takes the money and runs.
Donald Pleasence is Dr. John Seward: in the actor's own words, "an idiot who runs an insane asylum." Unlike Olivier, Pleasence always gives value for money. Though capable of subtlety and sensitivity, he is without guidance here. He wings it, playing Seward as a standard British working class buffoon, a character that is neither serious nor sympathetic.
Then there is Kate Nelligan, Canadian-born and the main focus of W.D. Richter's revisionist script. As Seward's daughter Lucy, she is a self-liberated woman, soon to leave coastal Whitby for a law practice in London. As played by the forceful Nelligan, this Lucy owes more to Ibsen's Hedda Gabler than to the traditional Edwardian vampire's victim.
Indeed, she is no victim at all. Says our gallant, slightly greasy Dracula, "you must forgive me."
"For what?" asks Lucy.
"For intruding in your life."
"I came of my own accord," she tells him. At this point, it's not at all clear who is supposed to be seducing whom.
The clash and clutter of acting styles creates a dramatic credibility gap that is bridged only by the razzle-dazzle of the technical work. Badham and his audience can thank:
*    John Williams, the Oscar-winning composer (Fiddler on the Roof; Jaws; Star Wars) whose lush, atmospheric music never fails to supply the appropriate emotional underpinning to any given scene.
*    Peter Murton, the production designer responsible for the overall look of the picture. He is the artist who sees to it that Billerbeck Hall, Seward's sanatarium for the insane, is chillingly medieval, and that Carfax Abbey, Dracula's English manor house, is spooky enough to induce shivers in a professional ghoul.
*    Gilbert Taylor, the cinematographer who captured it all on film with the proper, faded Hammer horror tones; and John Bloom, who edited his footage together with a keen eye for suspense and tension timing.
*    Albert Whitlock, veteran matte artist who, together with special effects artist Roy Arbogast, makes a host of unbelievable things happen in visually believable ways.
Badham is deeply in their debt. Without their contributions, his "stylish" Dracula would have no style. Because of them, this genuinely interesting oddity has much to recommend it.

Afterword: All right, I really hated director John Badham's previous film, 1977's Saturday Night Fever, and I took it out on him big time when he insisted (in a title card) that Dracula was "A John Badham Movie." Such directorial pretensions were relatively new then. To my mind, it was not a healthy trend for such an obviously group art. Even so, in the years that followed, Badham became one of the more interesting Hollywood studio directors. He would take on increasingly challenging projects — Blue Thunder, WarGames (both 1983), Short Circuit (1986) and Nick of Time (1995) — and occasionally he filmed them in Vancouver — Stakeout (1987) and Bird on a Wire (1990). In this century, his work has mostly been in television, including six episodes of the made-in-Vancouver series Psych.
As it turns out, Dracula's original author, Bram Stoker, also has Canadian connections. In 2009, Montreal-born Dacre Stoker, Bram's great-grandnephew, partnered with American screenwriter Ian Holt to publish Dracula the Undead, a work that billed itself as "the official sequel." Among his reasons for writing the book, Dacre said, was to reestablish some family control over the original novel.