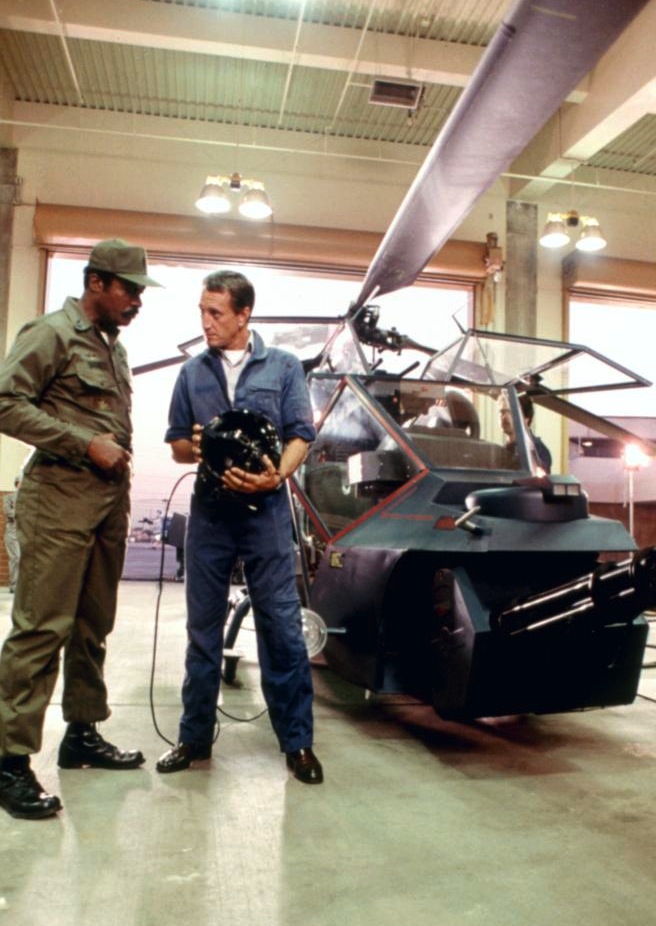 
Glimpses of today in an '80s action epic


Much of the reporting on recent events in the St. Louis satellite city of Ferguson, Missouri, has centred on the militarization of municipal police. America's cops, once sworn to "serve and protect," now deploy in surplus army vehicles with weapons and body armour more appropriate to the "subdue and pacify" mission of a hostile invasion force. It is a sad commentary that, 50 years after the passage of the U.S. Civil Rights Act, black communities are still embattled. On this day (August 29) in 1964, Philadelphia was into its second night of rioting, the result of an incident involving the physical removal of a black woman from her stalled car by police. During the first of four "long, hot summers" of nationwide racial confrontation and urban uprisings, the City of Brotherly Love's response was to call to duty every cop on its force. Included were the 100 members of America's original Special Weapons and Tactics (SWAT) Squad (formed a year earlier to fight bank robbers). Today, with every small town fielding it's own SWAT team (and children no longer believing that "the policeman is your friend"), police militarization is the issue du jour. If the roots of the problem go back 50 years, the alarm bells have been sounding in the popular culture for more than 30. Among the first to put the idea out there was John Badham, director of the 1983 action-thriller Blue Thunder.

Thursday, May 19, 1983.
BLUE THUNDER. Written by Dan O'Bannon and Don Jakoby. Music by Arthur B. Rubinstein. Directed by John Badham. Running time: 108 minutes. Mature entertainment with the B.C. Classifier's warning: some very coarse language and swearing; occasional violence and nudity. IT RISES SWIFTLY AND silently out of the rising sun, the most melodramatic entrance accorded a movie machine since the Orient Express steamed out of Istanbul [in 1974's Murder on the Orient Express]. Armed and deadly, it evokes not nostalgia but a sudden thrill, a rush of energy and fear.
Blue Thunder, product of the U.S. Army's Project T.H.O.R., is a $5-million helicopter equipped to pry, spy, judge and punish. In a test situation, it manages to impress the hell out of everyone.
Well, not quite everyone. Officer Frank Murphy (Roy Scheider), a former combat chopper pilot now flying with the Metropolitan Police Department's Astro Division, watches the slam-bang demonstration with considerable skepticism.
"You're talking about ground control from the air," Murphy says, interpreting the military pitchman's carefully-worded presentation.
"Yeah."
"That's been tried before," Murphy says, dolefully. "It didn't work out so hot."
"Where?"
"Vietnam."
Oh, yes, screenwriters Dan O'Bannon and Don Jakoby have managed to slip an idea or three into Blue Thunder. Consider, they say very gently, how the Vietnamese must have felt when the products of our high technology swooped in to play war games in the skies above their homes and streets.
According to the computer read-outs, a Blue Thunder action against urban guerillas produces "one civilian death for every 10 terrorists (killed). That," say the brass, "is an acceptable risk.
"If you're not one of the civilians," comments Murphy, the flying cop. A common-man hero nursing guilt over his own part in America's Southeast Asian adventure, he takes nothing at face value.
Nor should the audience.
Yes, Blue Thunder comes billed as this summer's Jaws. An aerial adventure, it works hard to deliver the most effective edge-of-the-seat action since the great white ate Robert Shaw.
And, yes, it's hard not to feel a surge of savage excitement when Murphy, the only man alive who can prove that a murderous conspiracy threatens American freedoms, hijacks the Army's Tactical Helicopter Offensive Response bird, and sets off one of the all-time great chase scenes.
It's great fun, especially if one identifies with Murphy who, as played by Scheider, is an attractive, world-weary boy scout. Not only does he enjoy the love of a good woman (Candy Clark), and the camaraderie of the corps (Warren Oates and Daniel Stern), but he's a right-thinking man of action committed to truth and justice.
Swell. But don't forget that announcement at the beginning of the picture that tells us that all of the science-fictional technology that we see in the movie ''exists today."
The next time I hear that ssspeat-ssspeat-ssspeat-ssspeat sound passing over my neighbourhood in the night, I'll be wondering just what's going on up there.
Blue Thunder is being marketed as just another mindlessly manipulative mass audience thriller. On the other hand, since Murphy-like heroes are in short supply in real life, it could well be a glimpse into our own future.

Afterword: After seeing his1979 Dracula adaptation, I was skeptical about John Badham's directorial abilities. In short order, though, I began to appreciate his eclectic taste in projects, and his genuine appreciation of the social issues at the heart of his best movies. Immediately before Blue Thunder, he offered filmgoers an adaptation of playwright Brian Clark's right-to-die drama Whose Life Is It Anyway? (1981). After Blue Thunder, Badham made War Games (1983) and Short Circuit (1986), pictures that dealt with some potential high-tech nightmares with a decidedly light touch. In 1987, he visited Vancouver to shoot Stakeout, the first of four features he filmed here, (The others were1990's Bird on a Wire, the 1993 Stakeout sequel, Another Stakeout, and the 2002 thriller Brother's Keeper.) The Blue Thunder movie spun off a kid-friendly, single-season Blue Thunder TV series (1983-4) that starred Dana Carvey and James Farentino.

See also: For another take on that "ground control from the air" military doctrine mentioned in Blue Thunder, see my review of Francis Ford Copolla's Apocalypse Now.