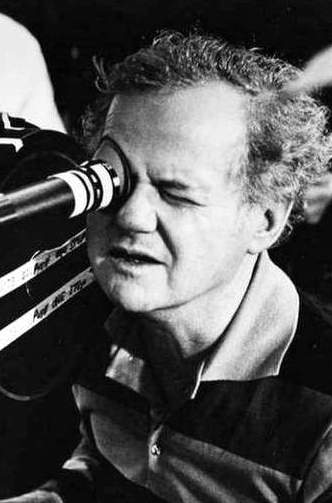 Director Daniel Petrie sets up a shot on the set of 1978's The Betsy.


Born on this day (November 26) in 1920, director Daniel Petrie visited Vancouver in 1978 for an interview during which we discussed his Glace Bay, Nova Scotia roots, his New York acting debut and his big-screen adaptation of Harold Robbins’s The Betsy.

“THE   CRITICS,” SAYS DANIEL PETRIE, “lie in wait for anything by Harold Robbins. I’ve deliberately tried to defang them by casting my film so that it will have class.”
Petrie, 57, is not the first filmmaker to bring Robbins to the screen. To date, at least six features have been inspired by the work of the big, bold novelist, a list that includes 1964’s The Carpetbaggers, Stiletto (1969) and The Adventurers (1970).
If Petrie’s strategy works, he will become the first director to do the job successfully. His picture is  based on The Betsy, Robbins’s recent best-seller about the auto industry.
His class strategy cost his producer, Allied Artists, some $6 million. Included on the tab  is a performer that no critic can ignore, Britain’s Lord Laurence Olivier. The much-honoured actor heads a cast that includes Robert Duvall, Jane Alexander, Edward Herrmann and Katharine Ross.
Petrie, a relaxed and gentlemanly Canadian, was first offered the project in October, 1976. He had just won an Emmy for his direction of the television movie Eleanor and Franklin, an historical drama that starred Alexander and Herrmann in the title roles.
At that moment  he was a “hot” director.
He turned The Betsy down.
“The original script had a good many sex scenes,” Petrie told me in an interview. “There was much macho activity by the young hero as well.
"I hadn’t read the book, but I had heard that it was about power abuse in the auto industry. It is supposed to be loosely based on the Ford family.
“There was very little of that in the script that I saw, so I turned it down. I like to do pictures with a little more theme.”
Throughout his career, Petrie has been partial to properties with themes. He has spent more than 30 years directing for the stage, screen and television, and a thread of social consciousness runs through his best work.
High-minded TV shows such as East Side, West Side, The Defenders, Profiles in Courage and Marcus Welby, M.D., as well as such films as 1961’s A Raisin in the Sun, all provided the director with top-quality material.
A new script brought Petrie on board with the Robbins project. Very soon it was obvious that the filmmaker was in an auto race.
Wheels, Arthur Hailey’s book about Detroit, had been sold to television. A  mini-series was planned and it looked very much as if it would be ready to air in the fall of 1977.
Then, the NBC-TV project ran into script problems of its own. Wheels won’t be ready until later this year, which means that Petrie’s Betsy gets the first clear shot at the audience, a fact much appreciated by Allied Artists, a company that badly needs a hit.
Petrie, naturally, hopes that it will have one. It would be nice, he admits, to top his broadcasting successes — last year [1977] Eleanor and Franklin: The White House Years earned him yet another directing  Emmy — with a theatrical blockbuster.

A native of Glace Bay, Nova Scotia, Daniel Petrie had not planned on a movie career. Indeed, had it not been for a bit of boredom in school, he might today be answering his mail at the CBC.
A lieutenant in the Canadian army during the Second World War, Petrie returned home to take a job at the Antigonish radio station, CJFX. Although he already had a degree in philosophy, he soon learned that some extra academic credits could open up new job opportunities within the corporation.
With a master’s degree, he could become the station’s educational programming director.
He was all set to enrol at the University of Toronto when the station manager showed him an article in the entertainment trade paper, Variety. Columbia University was offering a graduate program in adult education, a program that included the use of NBC’s New York studios for the study of radio.
“I was the first Canadian allowed to study outside Canada on our version of  the G.I. bill,” he said. “At least that’s what they told me at the time.”
The second-semester course load at Columbia was lighter than the first. “Just to prevent being bored,  I went over to CBS looking for a job. While I was there, somebody asked if I had ever done any acting.”
He had, and so was given directions to a Broadway audition. Much to his surprise, he got the part, a supporting role in director Herman Shumlin’s Kiss Them for Me [1945]. The stage comedy ran a respectable 110 performances, with Petrie appearing as Richard Widmark’s younger brother.
“After that, everything changed,” he says. The Nova Scotian became a New Yorker. When his student visa expired, he applied for resident alien status — he still retains his Canadian citizenship — and has been working in the U.S. ever since.
The Betsy is his 10th theatrical feature. His 11th, called Born on the Fourth of July, goes before the cameras May 18. It’s the story of a returned Vietnam war veteran and is, Petrie admits, a theme picture.
Making movies is like a marriage, he says. “Directors and actors must have a rapport, and a mutual respect for it to work  out.” Starring in his new picture is one of the most sought-after actors in the business, Al Pacino.
Their “marriage” is an  occasion that the director is looking forward to with considerable excitement. How did the match come about?
“Well, when you’re hot, you’re hot,” says Daniel Petrie with a genial shrug.

The above is a restored version of a Province interview by Michael Walsh originally published in 1978. For additional information on this archived material, please visit my FAQ.

Afterword: And then, as Petrie might have added, sometimes you’re not. In mid-May 1978, the German-based financing for Born on the Fourth of July was withdrawn and the production was abandoned. (The screenwriter, Oliver Stone, was particularly devastated. Stone made it his mission to see author Ron Kovic’s book to the screen, and did so a decade later with Tom Cruise in the starring role. The feature was nominated for the 1989 Best Picture Academy Award, and Stone took home his second Best Director Oscar.)
As noted in the above interview, Nova Scotian Petrie became a New Yorker in the late 1940s, where he spent the next decade directing television dramas. He made his feature film debut directing Richard Burton in 1960’s The Bramble Bush, an adaptation of Charles Mergendahl’s 1958 “big, bold novel” about small-town sex and euthanasia. A year later, he underscored his commitment to issue-driven cinema with A Raisin in the Sun, the movie version of Lorraine Hansberry’s racially-charged Broadway drama. Under Petrie’s direction, Sidney Poitier and Ruby Dee reprised their stage roles in the story of a black family that moves into a white neighbourhood.
Following the collapse of his Born on the Fourth of July project, Petrie made the thoughtful Resurrection (1981), earning actress Ellen Burstyn an Oscar nomination for her performance as a woman who develops healing powers. That was followed by my favourite Petrie film, the morally challenging Fort Apache, The Bronx (1981). Mistaken by many as a simple cop show, the picture stars Paul Newman in a tale that interlaces themes of tragedy and justice in the complex matrix that is modern life.
Petrie’s Canadian connections were genuine. When the federal government sought to “foster” a domestic production industry in the early 1970s, he returned to Nova Scotia to direct 1973’s The Neptune Factor, an undersea adventure that ended up being less than the sum of its ambitious parts. A decade later, he returned to his hometown to shoot his most heartfelt film, 1984’s The Bay Boy. Written as well as directed by Petrie, it starred a young Kiefer Sutherland as a small-town boy feeling the first stirrings of love in 1930s Glace Bay.
Filmmaking, it turns out, is a Petrie family business. After 1999, Daniel Petrie's screen credits read "Daniel Petrie Sr.", in recognition of the fact that his eldest son, Daniel Jr., had become an Oscar-nominated screenwriter — for 1985's Beverly Hills Cop — as well as a producer/director in his own right. His second son, Donald Petrie, has made his own name in the industry as an actor and the director of such films as 1988's Mystic Pizza and Miss Congeniality (2000). Daniel Petrie Sr. died in 2004 at the age of 83.