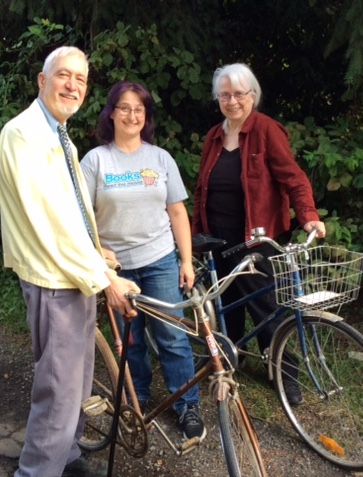 Two bicycles, three riders: Michael and Susan pose with Pauline and their vintage two-wheelers for a final photo to commemorate a most memorable day spent together.
THE WHOLE STORY — To see a complete list of the 1,042 items currently posted to Reeling Back, visit the FULL SITE INDEX. To locate specific names or subjects, type your key word(s) into the Search box (located in the right-hand corner of the nameplate above), and click on the magnifying glass (search) symbol. The archive grows almost daily, so feel free to explore.

A bike ride to remember


They’re retired now, but in their day our standard-issue street bicycles gave good service, required minimal maintenance and never needed their operating systems upgraded. They will always have a special place in our hearts because, on this day (October 15) in 1976 . . .

It was, as Mr. Rogers would say, “a beautiful day in the neighbourhood.” Friday, October 15, 1976 was a perfect fall day in Vancouver. Late in the morning, Sue and I bicycled the 17 tree-shaded blocks to The Comicshop. The Kitsilano storefront had become a gathering spot for local graphic artists and comic art fans, and we often dropped by.

Late that same afternoon, we drove the 37-plus blocks (a route that included the Burrard Street Bridge) to downtown’s St. Paul’s Hospital. There, at approximately 6:00 p.m., Sue gave birth to our daughter, Pauline Michelle. In all, it was a day that we’ll never forget.

A week ago Saturday, we donated those vintage two-wheelers to Ride On, a local bike shop, where they will be refurbished, recycled and sold to new owners to enjoy in our increasingly bike-friendly city. Before parting with them, though, we all got together for the above photo. Pauline, who commutes on her own bicycle now, is wearing a T-shirt with Reeling Back’s alternative motto: Books — Read the movie.

In case you were wondering, the tie that I’m wearing was a gift from our daughter. It features the maple leaves of autumn, an appropriate design as we all prepare to vote in Canada’s 2019 federal election.

After a summer full of unforeseen challenges, getting back on the bicycle that is Reeling Back has been a bit slow. So far in October the postings have included:

RUNNING BRAVE — In 1983, director Don Shebib brought together an impressive cast of Canadian First Nations performers to tell the true story of sports hero Billy Mills, a Native American who won a gold medal at the 1964 summer Olympics. (October 14)

THE CRUSADE THAT CLEANED-UP COMICS — Posted to mark the sixth anniversary of Reeling Back, this feature was first published in 1967. With just a touch of attitude — the author was 22 at the time — it describes the state of the comic book 13 years after the creation of the Comics Code Authority. (October 11)

COMMON THREADS: STORIES FROM THE QUILT — Directors Rob Epstein and Jeffery Friedman made a major contribution to the public conversation around HIV/AIDS with this 1989 documentary, a film inspired by the creation of the AIDS Memorial Quilt. (October 11)

MEMOIRS OF AN INVISIBLE MAN — Sold as an adventure fantasy, director John Carpenter’s 1992 political comedy stars Chevy Chase as a stock market analyst who is involved in an industrial accident that prompts the unwanted attention of the C.I.A. (October 8)