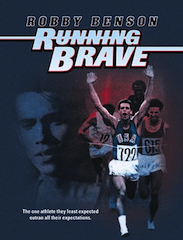 The moment of victory for Billy Mills (Robby Benson) in the 10,000 metre Olympic event is featured on the DVD release cover of director Don Shebib’s 1983 sports feature Running Brave.


Bias is built into the casting process


Given the advantage of a rain-soaked track, Native American runner Billy Mills won a gold medal on this day (October 14) at the 1964 Olympic Games in Tokyo. His turbulent life and upset victory were celebrated in director Don Shebib’s 1983 biographical drama Running Brave.

RUNNING BRAVE. Written by Henry Bean and Shirl Hendryx.  Music by Mike Post. Directed by D.S Everett (Don Shebib). Running time: 105 minutes. Mature entertainment with the B.C. Classifier’s warning: occasional nudity and coarse language. HE'S PROBABLY GOT HEART. His muscles are obvious. It's Robby Benson's eyes that leave Running Brave running on empty.
The story of Billy Mills, the South Dakota-born Sioux Indian athlete who overcame all obstacles to score an upset victory at the 1964 Olympics, the Running Brave project needed an actor with those particular qualifications. Benson's credentials seemed to be in order.
Heart? In 1981’s The Chosen he played a Hassidic Jew finding himself in a post-Holocaust world, while in Walk Proud (1979), he was a Chicano street fighter in Los Angeles.
Muscle? Benson played a vigourous game of basketball in the Rocky-lite One on One (1977) and, at 27, didn't need stunt doubles for the Mills character's numerous foot races.
The trouble is his eyes. Dull blue — genetically unlikely even in an Indian who is "half white" — Benson's eyes are as dead and empty as a frozen fish's. That, combined with his unfortunate resemblance to Jerry Lewis, undermines the power of his performance and the impact of the entire film.
Financed by Alberta's oil-rich Ermineskin Cree, the picture was designed as a tribute to the real Mills and, more generally, as an expression of Indian racial pride. Made on location in and around Edmonton and Drumheller (though set entirely in the U.S.) the film was directed by Toronto's Don Shebib, whose credits include an underrated little gem of a sports movie called Second Wind.
Shebib surrounded Benson with capable actors, and gets convincing performances out of a supporting cast that includes Pat Hingle (as Kansas University coach Bill Easton), Claudia Cron (as Billy's middle-American girlfriend) and August Schellenberg (as Billy's father). After seeing the distributor's final cut, though, Shebib asked to have his name removed from the picture.
The reasons for Shebib's action are not clear. As released, the film (credited to "D.S. Everett") does lack the raw emotional drive that usually distinguishes a Shebib project.
Part of the problem is the screenplay, a slick, standard sports-hero tract credited to Henry Bean and Shirl Hendryx. Characters and issues drop in and out without being developed or resolved.
The main problem, though, is Benson. As Mills, the running brave, he suggests none of the inner strength nor profound feelings within a man who must have possessed both.

Afterword: In his review of Running Brave, published in the February 1984 edition of Cinema Canada, John Harkness tells us that Don Shebib “removed his name from the film after it was recut against his wishes.” To date, I’ve not come across any explanation of why the veteran director disavowed his seventh theatrical feature. Its distributor, Disney’s Buena Vista Pictures, promoted it as a Rocky-like sports picture, a story of a personal triumph over all the odds. As noted in my review, its financial backers saw it as an expression of their indigenous pride.
They were attempting to counter the stereotypical image of First Nations and Native Americans in the movies, the systemic bias identified in Hollywood’s Indian, a collection of scholarly essays published in 1998. In doing so, the producers had to face the fact that in 1983, there were no A-list stars of indigenous origin available to play Billy Mills. Over the years, whitish actors such as Jeff Chandler, Anthony Quinn and Michael Ansara regularly led howling bands of Italian or Mexican-American extras into battle against frontier settlers or the U.S. cavalry. It was disappointing, though hardly unusual, that the title role in Running Brave went to blue-eyed, former-teen star Robby Benson.
Credit must be given, though, to whoever took the decision to include among the cast Canadian indigenous actors Denis Lacroix (Cree), Graham Greene (Oneida), George Clutesi (Tseshaht), Margo Kane (Cree-Saulteaux) and the mixed-race August Schellenberg (whose mother was of English-Mohawk extraction). Shebib’s film featured the greatest concentration of First Nations talent on screen until the release of 1990's Dances With Wolves.