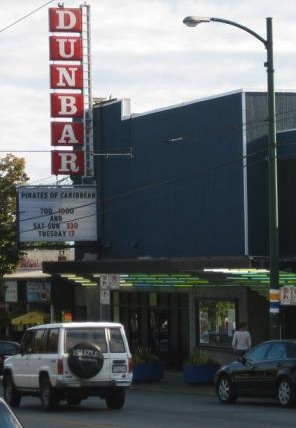 Thirty years on, the Dunbar Theatre, Vancouver's westside neighbourhood cinema, has the distinction of being the last of the Expo era movie houses still in the picture business.


Much to enjoy on screens off the site


The thirteenth item in Reeling Back's 38-part series on the cinema of Expo 86 looks at the movie fare available elsewhere in the city during the world's fair. Vancouver's International Film Festival was among the subjects covered in our feature called Expo 86 Off Site.

THERE WILL BE NO SHORTAGE of pictures for those Expo visitors in search of more conventional movie fare. In addition to the city's first-run movie theatres, the Fifth Vancouver International Film Festival is scheduled to run for 35 days during Expo, from May 23 to June 26.
More than 200 features from 45 countries will be shown, over over half of them Canadian premieres. Theatres playing host to festival screenings are the Dunbar, Hollywood, Ridge, Vancouver East and the Varsity.
Canada's major theatre circuits — Famous Players and Cineplex Odeon — operate 17 commercial movie houses, with a combined total of 37 screens, within Vancouver's city limits. Located in the downtown core are the Capitol (six auditoriums), Coronet (two), Downtown, Fine Arts, Odeon, Royal Centre (ten), Vancouver Centre (two) and the Vogue.
Theatres operated by the two chains offer bargain admissions every week on "$2.50 Tuesday."
The city's independently-operated cinemas offer double-feature programming, following policies of either repertory (Ridge, Vancouver East) or recent release second-run bookings (Hollywood, Studio).
Visitors to Vancouver should be aware that in British Columbia all commercial feature releases are rated by a provincial film classifications office. Most bear warning captions that must be displayed in the movie's newspaper advertising and at the theatre.
The ratings used are General, Mature, 14 Years (limited admittance) and Restricted (limited to 18 and over). Although there is no X category, sexually explicit material is contained in films that bear the warning "completely concerned with sex."
Introduced more than 25 years ago [1960], the film classifier's captions are a B.C. innovation designed to advise moviegoers as to the nature of a film's content.

Afterword: Of the 14 movie houses named in the above report, only two remain today (2016). The Dunbar Theatre opened as an independent in 1935, then operated as a link in the Odeon chain from 1941 to 1987, and as a Famous Players theatre for another decade. In 1998, the Vancouver west side neighbourhood cinema became an indie again, operated by a trio of University of B.C. students who took on the theatre as a summer project. One of them, Ken Charko, had worked for Cineplex Odeon and he stayed, eventually buying the Dunbar. In 2015, Charko executive-produced a 12-minute short film made to celebrate the theatre's 80th anniversary. Tonight (May 29), the Dunbar continues its first-run engagement of Alice Through the Looking Glass, with Mia Wasikowska in the title role.
Granville Street's Vogue Theatre also remains. Built in 1941 as a pillar of the downtown entertainment district, it closed as a movie house in 1987. Repurposed as a live music venue, the Art Deco building was designated a National Historic Site by the federal government in 1993. Today, there are no movie houses left on the two blocks of Granville once known as Theatre Row. Not mentioned in the above story was the Park Theatre, a single-screen Cineplex Odeon house outside of downtown in the South Cambie neighbourhood. Opened in 1941, it is notable for having survived several owners and, together with the Dunbar, currently is showing Alice Through the Looking Glass.
Demolished in the years since Expo 86 were the Odeon (1932-1991), the Downtown (1929-1998), the Studio (1949-2000), the Capitol (1921; turned into the Capitol Six, 1977-2006), and the Coronet (1964-1986; expanded into the Granville Seven, 1986-2012). Also gone are the Fine Arts (1969-1989), the Royal Centre (1981-1993), the Vancouver Centre (1977- 2002),  the Varsity (1939-2006), the Vancouver East (1981-2011), the Hollywood (1935-2011) and the Ridge (1950-2013). In all, Vancouver lost 38 commercial movie screens since its world's fair.
To be fair, all have been replaced. Recent years have seen the construction of four new urban multiplexes. The Fifth Avenue, opened in 1996, has five screens. The International Village, opened as Tinseltown in 1999, added 12, and the Scotiabank Theatre, opened as the Paramount in 2005, offers nine. The Rio, reopened in 2006, is a single-screen neighbourhood independent similar to the Dunbar. And finally, just three months ago (March 4, 2016), the Cineplex Marine Gateway opened in the Marpole neighbourhood, an 11-screen picture palace promoting its high-tech presentation and liquor-licensed VIP lounges.