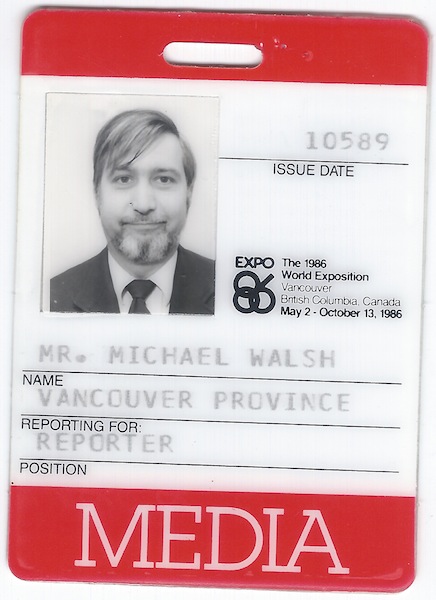 If it appeared on a screen during Expo 86, Vancouver Province film critic MICHAEL WALSH was there to report on it.

A Fair to Remember


The cinematic sequel to Expo 67


On this day (May 2) in 1986, Their Royal Highnesses Charles, the Prince of Wales, and Diana, the Princess of Wales, together with Canada's prime minister, Brian Mulroney, cut a multi-coloured ribbon to open Vancouver's World Exposition on Transportation and Communication. Remembered as Expo 86, the five-month fair coincided with both the city's centennial celebrations and the 100th anniversary of the first passenger train to make the trip across Canada. Originally conceived as a "specialized" fair with a transportation theme, the idea quickly grew into a top-tier affair, the event that civic boosters hoped would turn our wannabe metropolis into a "world-class city." Local media took up the challenge of providing appropriate coverage, with the Sun and Province newspapers setting up on-site bureaus. During our Expo summer, I covered the film and video presentations that were an integral part of the late 20th-century world's fair experience. I contributed a total of 38 features, published in four special supplements that ran in May, June, July and August. Over the next two weeks, I'll post the 13 items that first appeared in The Province's May 29, 1986 Expo Preview magazine, a comprehensive overview of what fairgoers could expect to see on the 70-hectare (170-acre) site. It begins with this scene-setting Expo 86 Introduction.

IN MONTREAL, THE OFFICIAL theme was Man and His World. Once the gates were open, though, it quickly became Man at the Movies.
"A film revolution to blitz one's mind," read the headline in Life Magazine.
"Films are the stars of the Montreal fair," Joseph Morgenstern wrote in Newsweek, "and those at the most popular pavilions are light years ahead of anything shown anywhere in the world."
Expo 67 is one tough act to follow. In the generation since, moviemakers have absorbed the lessons of that really big show. From Kubrick and Coppola to Lucas and Spielberg, they are now as attentive to the look and sound of their productions as they are to scripts and casting.
Audiences are more sophisticated, too. In an age when nine-year-olds can spot faulty matte lines, is there any excitement left for Vancouver's Expo 86, opening today?
The short answer is yes.
The 1986 theme may be World in Motion (Transportation) — World in Touch (Communications), but fair visitors can expect Blitz II, a high-powered sequel to Montreal's film revolution.
If movies were airplanes, Expo 67 would stand out as the moment that jet engines replaced propellers. At Expo 86, they're rolling out the SSTs.
Though smaller than Montreal's Canadian Centennial extravaganza, Vancouver's fair (celebrating this city's centennial) actually offers a greater variety of cinematic experiences. Movies at Expo 86 will be bigger, faster, more real and more involving than ever before.
In addition to the multi-screen stunners that have become standard world exposition fare, there will be four full-circle screen presentations (at the Telecom, Czech, Quebec and Singapore pavilions), three different kinds of 3-D films (Canada, Ontario and U.S.S.R. pavilions), two pavilions equipped with high-speed Showscan pictures (Canada and B.C.), the vastness of OMNIMAX (Expo Centre) and the eerie magic of the new Holovision environmental projection process (General Motors).
With the emphasis on participation, Expo's films guarantee that 1986 will be a fair to remember.

Afterword: As noted above, Expo 86 was the second World's Fair held in Canada. As it turned out, it also was the last (to date) to be held in North America. Built over 30 months, the fair grounds were actually two sites joined by a dedicated SkyTrain light rail line. At one end was the Canada Pavilion, located on Vancouver's downtown waterfront on what had once been the CPR passenger steamship fleet's Pier B & C terminal. At the other end was the main site, built on the north shore of False Creek on industrial land that once included the CP Rail yards. Together, they housed 65 pavilions representing 41 nations, seven of Canada's provinces, two of its territories, three U.S. states, nine corporations and three special theme pavilions (such as the Pavilion of Promise, presenting the fundamentalist Christian worldview). As with so many municipal mega-events, the Expo 86 legacy is a mixed one. In 1986, Vancouver invited the world. And, as many have lamented since, the world stayed, together with the myriad problems associated with social and economic diversity. Thirty years on, my Expo coverage includes Vancouver memories and a snapshot of the changing times, both for cinema and the city.