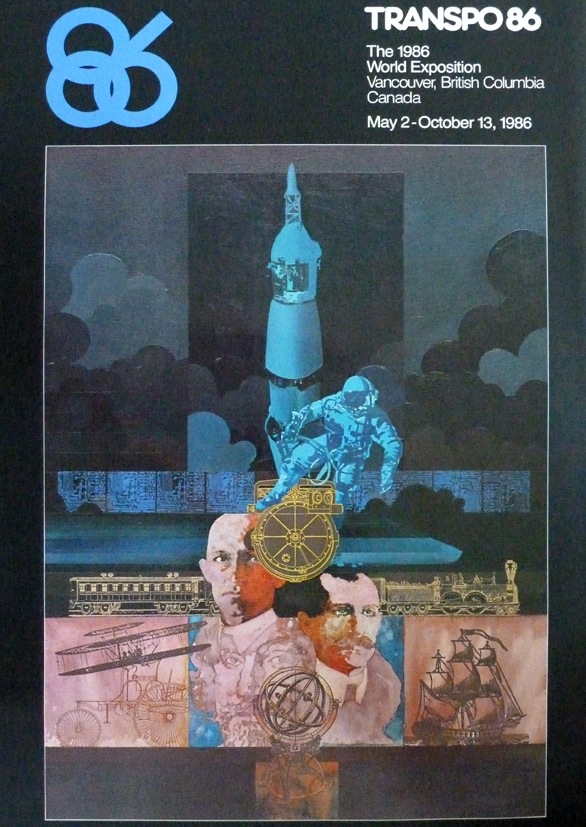 A poster issued by British Columbia's Ministry of the Provincial Secretary, when the fair was known as Transpo 86, illustrates some of the Expo 86 Connections.


The second item in Reeling Back's 38-part series on the cinema of Vancouver's Expo 86 looks at the international network of creators who make it their business to produce special-venue films. A relatively small community, it's the subject of a feature called Expo 86 Connections.

There's so much we share,
That it's time we're aware,
It's a small world after all!

WHEN HE BEGAN ACCEPTING commissions to design world's fair attractions, Walt Disney joined a relatively small international community. His first contributions — including the Pepsi Cola Small World exhibit that remains on permanent display in the Disneyland theme park — were among the highlights of the 1964-1965 New York World's Fair.
The Expo innovators' community remains a small, interconnected network. Vancouver's Expo 86 is just the latest moment of intersection in the careers of such men  as Colin Low, Emil Radok, Douglas Trumbull,  Bob Rogers and the corporate personality known as Walt Disney.
Low,  a Canadian, is the director of Transitions, the first live-action film produced in IMAX 3-D. He is introducing a new dimension to the giant screen process he helped pioneer as the director of the first IMAX movie, shown in the Fuji pavilion at Osaka's Expo 70 in Japan.
The biggest of the big screen technologies, IMAX was developed by a production team who had worked together at Canada's National Film Board, a group that included Low and Roman Kroitor, co-directors of the NFB's Expo 67 attraction, Labyrinth. Low's fascination with 3-D dates back to 1951, the year the Film Board's Norman McLaren created Around Is Around, his first 3-D cartoon.
(McLaren, of course, came to Canada in 1941 to set up an NFB  animation unit. At the time of his arrival, Disney had an NFB contract to produce cartoons for the Canadian government, another example of cinema's small world. )
In 1958, a Czechoslovakian conceptual artist named Emil Radok took an entirely different approach to the matter of enhanced film realism. His Laterna Magika, developed with his brother Alfred, combined live actors with film in a Prague theatre. That same year, at the Brussels World Exposition, he introduced his multi-screen "living collages'' to fairgoers.
Radok's 224-projector Creation of the World exhibit at the Czech pavilion, and a Laterna Magika production at Expo 67's La Ronde amusement park,  were among the Canadian Centennial fair's most talked-about attractions.
Radok settled in Montreal in 1968. His Applause Communications has created a multi-screen show for Disney's EPCOT Center in Florida, and is presenting The Taming of the Demons, a 10-projector multi-screen show, at Expo 86.
In 1960, the NFB's Low made the Oscar-nominated Universe, a cosmic journey that influenced director Stanley Kubrick's approach to 2001: A Space Odyssey (1968). That feature film project provided photographic-effects wizard Douglas Trumbull with his first major screen credit.
Now the dean of Hollywood special-effects directors, Trumbull developed, and is personally promoting, a revolutionary high-speed motion picture process called Showscan. Stunning visual clarity distinguishes Earthwatch and Zargon, the Expo 86 films being shown in Showscan.
The Disney contribution to the Montreal Expo was Canada 67, shown on nine screens arranged in a circle around the audience. Circle-Vision 360 films have a permanent home in the California Disneyland theme park, where Bob Rogers first worked for the Disney corporation.
Before striking out on his own, Rogers was a Disney studio writer and, later, a producer of exposition films for Florida's EPCOT Centre. Now an independent producer, Rogers's Expo 86 contributions include the 70mm, Oscar-nominated fantasy Rainbow Wars,  the Holovision-enhanced stage show The Spirit Lodge and a 35mm examination of Our British Columbia, presented on a Cinerama-like triptych screen.
Disney, of course, will be represented by a new Circle-Vision 360 production. A Portrait of Canada offers an episodic impression of our land and recalls the connections that unite the world's Expo film community.

Afterword:  Say the words "film industry," and most people think "Hollywood." More an idea than an actual place, Hollywood is our shorthand term for the integrated system that produces commercial entertainment motion pictures and television shows, the basic stuff of our popular culture. The real world, of course, is much more complex and Hollywood is just the biggest, best-known branch of the cinematic family tree.
Other branches include such distinct industries as the independent film movement, a parallel production system operating on the edges of the Hollywood system; sponsored films, the makers of TV commercials, industrial documentaries and music videos; documentary film, where the worlds of cinema and journalism often intersect; experimental films, the rarefied but still real realm of cinema produced within the fine arts world. Each of these industries is home to communities of creators and craft specialists making a living producing for such niche markets.
As noted above, Expo 86 offered us a glimpse into the distinct industry that exists to produce attractions for special venues. There have been 11 Bureau of International Exposition-sanctioned Expos since then (with a 12th scheduled for 2017 in Kazakhstan). The current community of innovators continue to produce spectacular pictures for the pavilions, with work by both Disney and Bob Rogers on view at the recent Expo 2015 in Milan, Italy.