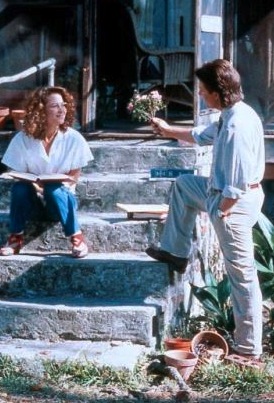 A legend in the making


Michael J. Fox paid tribute to Muhammad Ali this week, noting that the boxing champion reached out to him after the actor was stricken with Parkinson's disease. Born on this day (June 9) in 1961, Fox experienced his first symptoms during the making of 1991's Doc Hollywood.

THERE WILL NEVER BE another Doc Hogue.
A kindly old curmudgeon, Aurelius Hogue (Barnard Hughes) is a general practitioner right out of a Norman Rockwell painting. He has served the citizens of Grady — population 2,330 — for more years than anyone cares to remember.
Doctor Benjamin Stone (Michael J. Fox) is no Hogue. A big-city surgeon, he is in transit from a D.C. hospital residency to a job in a private clinic in Beverly Hills, when a close encounter of the bovine kind lands him in a South Carolina courtroom.
Sentenced to 32 hours of community service in Grady, "The Squash Capitol of the South," the brash young physician learns that the practical townsfolk are actively seeking a successor to the aging, ailing Hogue.
Mayor Nick Nicholson (David Ogden Stiers) says that the town council is prepared to offer $27,000 a year.
All right, $30,000. How about $35,000?
Stone is not interested. California beckons. Cosmetic surgery promises to make him wealthy and to provide him with endless access to beautiful girls.
He likes the idea of becoming Doc Hollywood.
There will never be another James Stewart.
Now 83 [1991], the Pennsylvania-born actor has come to embody what it's like to be an American in troubled times. Essentially decent, his characters were all hard workers who held to their ideals with an edge of nervousness that said "nothing good can be taken for granted."
In recent years, filmmakers have wasted a lot of time looking for a "new" John Wayne, when what the world really needs is a star with Stewart-like qualities.
Director Michael Caton-Jones needed just such an actor for the title role in his wonderfully Capra-esque Doc Hollywood. He found him in the hard-working, energetically idealistic Michael J. Fox.
Though he neither stammers nor gangles, Fox projects all of the right inner qualities, including instinctive good humour, boyish charm and embattled integrity. Trapped in "the buckle of the Bible belt," his Ben Stone encounters a warmly romanticized American heartland full of lovably gritty eccentrics.
"You can't poop in this town without everyone knowing what colour it is," says his ambulance driver, a self-reliant single mother named Lou (Julie Warner).
Based on Dr. Neil Shulman's 1980 comic novel What? . . . Dead Again?, Doc Hollywood introduces filmgoers to Warner, a tiny perfect beauty as effective opposite Fox as June Allyson was opposite Stewart. "Peel an onion, there's a lot of layers," her Lou says to Stone. Warner gives her character enough layers to challenge, intrigue and finally overwhelm him.
Caton-Jones, whose last film was the self-consciously heroic Memphis Belle (1990), gets closer to the essence of Golden Age Hollywood filmmaking here. Funny and moving, his picture is a lovingly-crafted affirmation of cracker barrel values.
"Don't mind Doc Hollywood," Dr. Hogue tells the well-wishers gathered at his bedside following a near-fatal stroke. "He don't know what it is to be beloved."
As Fox's career carries him in Stewart-like directions, the young actor risks becoming a beloved legend in his own right.

Afterword: Actor Michael J. Fox needed no introduction to filmgoers in 1991. His 1985 feature, Back to the Future, made the Edmonton-born television actor a big-screen star. The subsequent sequels — Part II in 1989; Part III in 1990 — sealed the deal with science-fiction fans, who celebrate Back to the Future Day annually on October 21. It wasn't until 1998 that Fox went public with the fact that he had the degenerative nerve disorder called Parkinson's disease. In his 2002 memoir Lucky Man, he describes the onset of symptoms during the filming of Doc Hollywood, his diagnosis and the drinking problems that followed. In a June 6, 2016 Rolling Stone item, Fox paid tribute to fellow celebrity Parkinson's sufferer Muhammad Ali, recalling that Ali had reached out to him and offered encouragement. When the young actor created The Michael J. Fox Foundation for Parkinson's Research, the legendary athlete joined with him to film public service announcements promoting its work. Michael J. Fox celebrates his 55th birthday today (June 9).