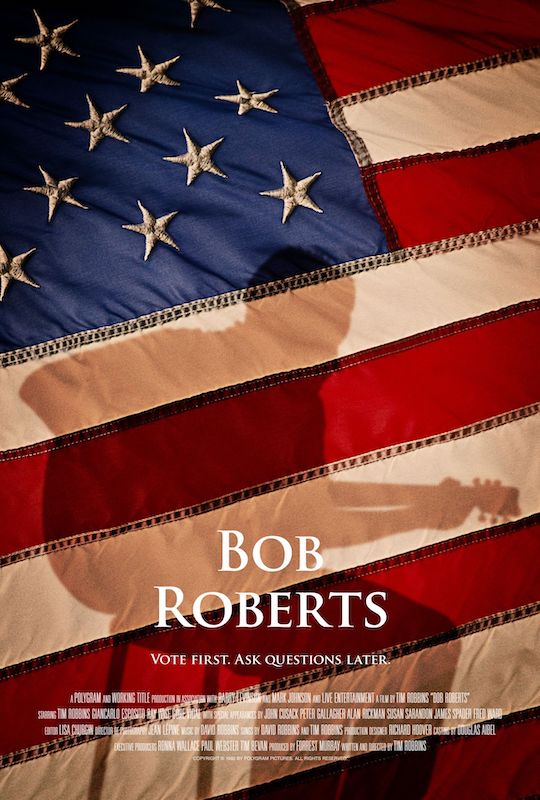 The silhouette of the performer-politician can be seen behind the American flag on a poster for writer-director Tim Robbins’s 1992 mockumentary Bob Roberts.


Yesterday (January 13, 2021), U.S. President Donald John Trump was impeached for the second time during his term of office. As the world watches the political tragedy playing out in America, let’s recall writer-director Tim Robbins’s darkly comic political thriller from 1992, the prescient Bob Roberts.

BOB ROBERTS. Music by David Robbins. Written and directed by Tim Robbins. Running time: 104 minutes. Rated Mature with the B.C. Classifier’s warning "some very coarse language." PICTURE THIS.
Griffin Mill, the title character in Robert Altman's Hollywood studio satire The Player,  is taking a meeting with first-time screenwriter Tim Robbins.
It's an irresistible image. Robbins, an actor who wants to direct, is pitching his concept, a razor-sharp political satire called Bob Roberts.
"It's about an American folk hero," he says, speaking rapidly. "He's a young, self-made millionaire, a Wall Street wheeler-dealer who's also a successful pop singer."
"This isn't Buckaroo Banzai meets Pretty Woman . . . ?" Mill says, a slight edge of warning in his voice.
"No, no. Nothing like that. Roberts is the ultimate anti-rebel rebel. He's one of those bright, attractive, really scary born-again conservatives.
"Bob's running for the U.S. Senate and, incidentally, against the 1960s. Our movie follows his campaign.
"It's more like Nashville meets The Candidate," Robbins says. "Except that it's done in the hip, mock documentary style of This Is Spinal Tap."
"Does he win?" the studio executive asks.
"Huh?"
"Does . . . he . . . win?" says Mill more slowly. "Our audiences insist on happy endings, Mr. Robbins."
Yes. We do.
And the happy ending to this imaginary encounter is that Mill decides that the young artist's ideas are just too controversial in a presidential election year. Free of Hollywood's corporate oversight, Robbins makes his movie independently. And it's a winner.
Yes. He did.
And, happily, Bob Roberts — Robbins's screen directing debut — is in the best tradition of its several screen influences.
It is offered as an arch examination of American democracy produced by British documentarist Terry Manchester (Brian Murray). Its subject is right-wing folk singer Roberts, and his 1986 campaign for a Pennsylvania senate seat.
A man who considers the '60s "a dark stain on American history," Roberts (Robbins) is a Reagan revolutionary. With faith in the free market and school prayer, the businessman-balladeer takes on the aging incumbent, Kennedy liberal Brickley Paiste (Gore Vidal).
In opposition to the cleancut Roberts is grungy, self-righteous investigative reporter John "Bugs" Raplin (Giancarlo Esposito). Unkempt and half mad, he alleges that the candidate's campaign manager, Lucas Hart III (Alan Rickman), is a former CIA asset involved up to his superior sneer in the Iran-Contra mess.
Manchester's camera records the full range of electioneering activities, from campaign concerts to televised debates. In the process, he witnesses a backstage rebellion on the night of Roberts's appearance on television's The Cutting Edge Live.
The chat show's left-leaning host (John Cusack) refuses to work with the singer-candidate. Speaking for the network, pragmatic producer Michael Janes (Bob Balaban) tells him he's "shooting (his) paycheque in the foot."
As in real life, this campaign gets nasty fast. Neo-conservative songs (co-written by Robbins and his brother, composer David Robbins) are just the beginning for Roberts.
Robbins, who had the title role in The Player, brings Roberts to life with the same combination of take-charge confidence and reptilian charm. And he can sing.
Expect such stars as Susan Sarandon, Fred Ward, Pamela Reed, Fisher Stevens, James Spader, Rebecca Jenkins and Peter Gallagher to show up in cameo roles. With a little help from his friends, Robbins puts on a first-class show.
His Bob Roberts is a black comedy with the wit to cut both ways.

Afterword: January 20, 1981 was a key moment in the intersection between the real world of politics and the popular culture’s reel world. Prior to the inauguration of movie actor-turned-TV pitchman Ronald Reagan as the 40th U.S. president, most of America’s chief executives were either former lawyers or generals. It’s been argued that the neoliberal “great communicator’s” eight years in office made possible — perhaps even inevitable — the rise of Donald Trump, and the incendiary events of January 6, 2021.
Sunday (January 10), Austrian-born action film star and former California governor Arnold Schwarzenegger posted a video to social media comparing the storming of Congress to the Nazis' November 9, 1938 racist rampage known as Kristallnacht. “Wednesday was the day of broken glass right here in the United States,” the man best known for portraying The Terminator told his fellow Americans. Could it get more surreal?
Give credit to actor and progressive political activist Tim Robbins for warning us. Released during the last month of the 1992 presidential election campaign, Bob Roberts cautioned voters not to assume that a Bill Clinton victory (over Reagan’s successor and former vice-president George H. W. Bush) would mean any shift away from the nation’s rightward drift. Its major message, though, was that we need to hold the media to account for facilitating the rise of celebrity politicians. “Bob Roberts came true,” Robbins ruefully told the New York Times Magazine writer Maureen Dowd in a 2018 interview.