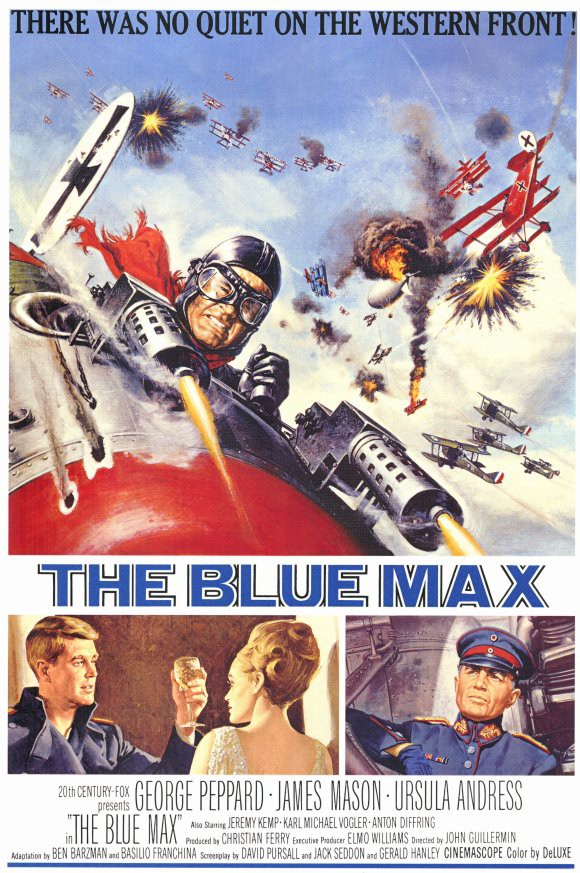 As the theatrical release poster makes clear, the aircraft are the true stars in director John Guillermin’s 1966 war epic The Blue Max.


Here’s to fighting for a lost cause


Lest we forget, it was on this day (November 11) in 1918, that the “war to end all wars” ended. For just over four years, the world’s several empires were engaged in wholesale slaughter in every corner of the globe, a useless assertion of imperial might that left millions dead and millions more questioning the meaning of it all. One year on, Britain’s King George V marked his empire’s “victory” with the first annual Remembrance Day celebration. A year later, in 1920, the monarch unveiled a cenotaph on London’s Whitehall. It was dedicated to “The Glorious Dead,” and established the official answer to the question “lest we forget . . . what?” In 1921, wearing a red poppy became part of the ritual, along with a reading of Canadian John McCrae’s elegiac poem In Flanders Fields. Instead of recalling the social and political reasons for the carnage, we were urged to focus on the “sacrifice” of those who died. The Great War was renamed the First World War when, after 20 years of misremembrance, a Second World War broke out. The argument over how to view armed conflict continues to this day in the popular culture, most prominently in one of cinema’s founding genres, the war movie. The First World War is the background remembered in the three feature films being added to the Reeling Back archive today (with links to each following the Afterword). Attempting to see the European air war from an enemy ace’s point of view was the aim of John Guillermin’s 1966 epic-length feature, The Blue Max

THE BLUE MAX. Written by David Pursall, Jack Seddon and Gerald Hanly. Based on the 1964 novel by Jack D. Hunter. Music by Jerry Goldsmith. Directed by John Guillermin. Running time: 156 minutes.
THE BLUE MAX, now playing at the reserved-seat Odeon Fairlawn [Toronto], derives its title from its hero's obsession, Germany’s distinguished flying cross. The Max was the merit badge handed out for 20 confirmed victories in air combat, and Lt. Bruno Stachel (George Peppard), the new man in the officers' club, wants one so badly that he can taste it.
Stachel, the resentful up-from-the-trenches son of a small businessman, soon learns that the air corps was designed as the private preserve of a crumbling aristocracy. Peppard, in an overdone performance, stalks through his role as the single-minded aspiring ace, a part appropriately written in a single dimension.
He is backed by an unusually fine supporting cast, a group which includes such competent actors as Jeremy Kemp (as Stachel’s understanding commanding officer Willi von Klugermann) and James Mason (as their senior officer, General Count von Klugermann).
They struggle valiantly against the gross inadequacies of the script, plot and the acting of designated fleshpot Ursula Andress. As the Countess Kaeti, the General’s young wife, she is carrying on affairs with all and sundry. Like Imperial Germany's war, theirs is a lost cause.
The true stars of the film are the aircraft. Rebuilt to the specifications of the First World War, even these flawless performers end up contributing to the film's feeling of total contrivance. The roundels of the Royal Flying Corps did not drop with such consistency, nor were the Kaiser's iron crosses quite so invincible.
History notwithstanding, the aerial sequences are the most exciting since 1938’s remake of The Dawn Patrol.
With admirable tolerance, The Blue Max sets out to lionize a former enemy. In doing so it displays all of the plot intricacy and character development of the current issue of National Comics' Enemy Ace magazine.
Although it remains an absolute joy to behold in the air, it fails to make an effective landing. And the grounded wreckage is allowed to smoulder far too long.

Afterword: Written over 50 years ago, the above review reminds me less of The Blue Max than of a green critic. I wince, recalling my college kid self trying hard not to to write like I was trying hard. Working on The Varsity, the University of Toronto’s student newspaper, was my apprenticeship in journalism. Honestly, I started college with a very different career plan, and it didn’t include newspapering. Somehow, though, a series of crazy circumstances led me to apply for a job at the Toronto Telegram in early 1967. I was hired, and life has been moderately mad ever since.
Rereading my 1966 piece, I was surprised to see how signs of my mature reviewing style were already in place. Because my degree major was sociology, it only seemed right to put a movie into its socio-historical context. (And, yes, I know that can come across show-offy, but being a critic requires a certain amount of assertive self-confidence. The trick is to turn those see-what-I-know passages into a conversational sharing of information.) Here I was, supporting my opinion with a comparison to an older movie, in this case one I’d probably seen on late night TV. Finally, there’s that comic-book reference, an attempt to drag in what was then pop-culture marginalia. Today, of course, comics are corporate Hollywood’s major source of inspiration. Was that nervy kid on to something?