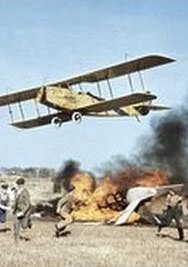 Chaos, death and destruction is just an inconvenient part of the show for the hero of director George Roy Hill’s 1975 aviation adventure The Great Waldo Pepper.

Soaring above it all


War’s aftermath a flight into forgetting


Lest we forget, it was on this day (November 11) in 1918, that the “war to end all wars” ended. For just over four years, the world’s several empires were engaged in wholesale slaughter in every corner of the globe, a useless assertion of imperial might that left millions dead and millions more questioning the meaning of it all. One year on, Britain’s King George V marked his empire’s “victory” with the first annual Remembrance Day celebration. A year later, in 1920, the monarch unveiled a cenotaph on London’s Whitehall. It was dedicated to “The Glorious Dead,” and established the official answer to the question “lest we forget . . . what?” In 1921, wearing a red poppy became part of the ritual, along with a reading of Canadian John McCrae’s elegiac poem In Flanders Fields. Instead of recalling the social and political reasons for the carnage, we were urged to focus on the “sacrifice” of those who died. The Great War was renamed the First World War when, after 20 years of misremembrance, a Second World War broke out. The argument over how to view armed conflict continues to this day in the popular culture, most prominently in one of cinema’s founding genres, the war movie. The First World War is the background remembered in the three feature films being added to the Reeling Back archive today (with links to each following the Afterword). In 1975, director George Roy Hill showed how the war shaped the worldview of one of its American veterans, an aviation legend known as The Great Waldo Pepper.

THE GREAT WALDO PEPPER. Written by William Goldman. Music by Henry Mancini. Produced and directed by George Roy Hill. Running time: 107 minutes. General entertainment.  IN THE LATE 1920s, aviation movies were heralded as the wave of the future. According to one respected observer, the day that Charles Lindbergh landed in Paris was the day that the Western died.
"Lindbergh has put the cowboy into the discard as a type of national hero," wrote editor James R. Quirk in the April, 1929 issue of Photoplay. "The Western novel and the motion picture heroes have slunk away into the brush, never to return."
At the time, there was lots of evidence to support Quirk's thesis. Wings, director William Wellman’s epic celebration of camaraderie in the air corps, had just won the first ever Academy Award for best picture.
There were also a number of fly-boy films in production, including Howard Hughes’s Hell's Angels (released in 1930), and Howard Hawks's original Dawn Patrol (also 1930).
Somehow, though, aviation pictures missed becoming one of the standard action genres. And, despite its premature burial, the Western survived.
That being the case, there is a touch of irony in the fact that director George Roy Hill, a lifelong flying buff, made a lasting impact on the film business with his first Western: Butch Cassidy and the Sundance Kid (1969). He already had an idea for an aviation movie when he went to work on his biggest success, last year's [1974] Oscar-winning best picture, The Sting.
With that kind of momentum behind him, Hill cast his favourite male star, Robert Redford, in the part of The Great Waldo Pepper, the self-proclaimed "best flier in the world." Together with William Goldman, who scripted Butch Cassidy, Hill set out to record the closing of the aerial frontier.
Waldo Pepper is a hero with his head in the clouds, a man who loves flying more than anything else, but would have trouble explaining why. Unfortunately, he is a hero for whom the time is never right.
Having just missed out on the knightly combats of the First World War, Waldo finds that his derring-do as a member of a 1920s flying circus runs afoul of new government regulations designed to make the skies safe for commercial aviation.
When he is finally grounded, the blow is doubly cruel because it comes from Newt (Geoffrey Lewis), Waldo's old squadron leader , the man who once called him "the best natural flyer I ever saw.''
Doc Dillhoefer (Philip Bruns), Waldo's financially troubled boss, is more succinct. To him the daredevil is plain "dangerous."
Hill's story gives Waldo an alter ego, Ernst Kessler (Bo Brunder), the over-achieving German Ace that Waldo acknowledges as “the best.” It also gives him a buddy, Axel Olsson (Bo Svenson), a man confronted by the same problems as Waldo, but who manages to come to terms with the changing times.
In common with the Western, aviation pictures lend themselves to a number of dramatic themes. In recent years, director John Guillermin has shown how the air corps provided upward mobility in a rigidly hierarchical society (The Blue Max; 1966), and Roger Corman used the final battle between Von Richtofen and Brown (1971) as a metaphor for the industrial revolution.
Hill’s story could have been a serious drama. But, together with Goldman, He concentrated on keeping things cloud-light. According to their script, Waldo is not broodingly thoughtful, but cheekily self-assured. Redford’s brash, easy manner makes his character seem engagingly bewildered rather than belligerently wrong-headed.
Like Waldo, Hill lacks any real interest in people, any real compassion for his characters. For Waldo, death — two of the  film's principals die in aerial mishaps — is an inconvenience, an unscheduled part of the show.
For Hill, it is a transitional device, a means of moving his hero into a new situation. Neither tragedy is allowed to change the essentially upbeat tone of the film.
Hill's own passion is flying — the National Film Board's 1969 short Blake would be a perfect complement to the program — and it is in the aerial sequences that this shines through. His film is structured to feature progressively more daring feats of aerobatic skill.
From simple barnstorming, to wing-walking, mid-air transfers and a pilot’s-eye view of the next-to-impossible outside loop, Robert Surtees's colour photography puts the audience into the action, allowing them to share Waldo’s sense of intoxication.
The thrill of leaving the ground, of soaring above the clouds, is like a drug. For Waldo, it is something more important than the death of friends or the inexorable march of progress.
Hill's movie is giddily effective in capturing this feeling of light-headedness. Though The Great Waldo Pepper is indifferent as drama, it is a breathtaking bit of aerial escapism.

Afterword: I should have made it clearer in my review that Waldo Pepper was a veteran of the First World War, a man who served as a flight instructor. “The best natural flyer,” he taught others the skills to kill. The experience changed him as, indeed, the war changed everything. It set in motion a century of unprecedented technological innovation. Less than 30 years separated those men in single combat above the trench lines from their sons in bombers able to incinerate entire cities with a single bomb.
Aviators and their “knightly combats” inspired Hollywood chronicler James Quick to jump to his conclusion about the future of film. He was not entirely wrong. The Great War’s devastation did bring about a profound shift in the arts. Despite the best efforts of ruling elites to limit the question of remembrance to the matter of when in November one was required to wear a poppy, the truth was out there. At a crucial moment in the conflict, the Russians chose to opt out, demonstrating that it was possible to change the rules of the game. In 1917, they turned their attention to revolution and overthrew their ruling class, altering the course of history.
Europeans, who had experienced its horrors directly, spent the rest of the 20th century processing the war’s effect. They did it with disturbing intensity through such cultural means as statuary, books, political movements and, of course, the technologically innovative arts of recorded music and cinema. The Americans, who arrived late and who were spared the destruction of their own national infrastructure, could tell themselves more a entertaining story. Waldo Pepper’s ability to overlook tragedies not his own is a chilling metaphor for American exceptionalism, the terrible tendency of the U.S. to ignore its responsibility for so much death and destruction around the world. The Great Waldo Pepper was released to theatres on March 13, 1975, just seven week before the April 30 fall of Saigon. Lest we forget.