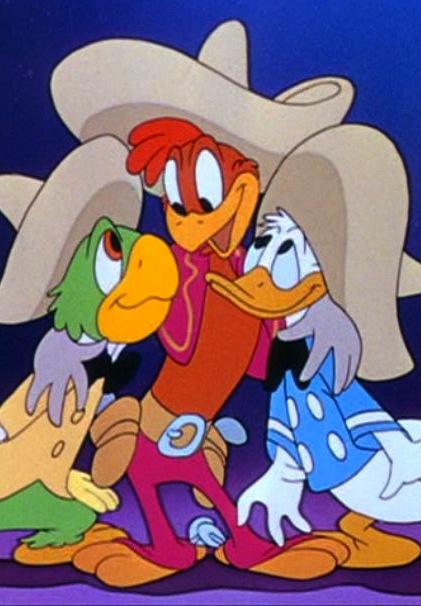 Birds of a feather


Born — or should we say hatched? — on this day (March 13) in 1914, Donald Duck made his movie debut in 1934. The short-tempered waterfowl saw service in Second World War training films and visited Latin America in the 1945 animated feature The Three Caballeros.

Monday, January 30, 1977.
Excerpts from THE THREE CABALLEROS (1945). Music by Edward H. Plumb, Paul J. Smith and Charles Wolcott. Production supervision and direction by Norman Ferguson, Clyde Geronimi, Jack Kinney, Bill Roberts and Harold Young. Running time: 42 minutes (original running time: 71 minutes). General entertainment. THEY HAD BETTER HAVE a good explanation ready when the boss gets back. If Walt Disney knew what his company was doing to The Three Caballeros, he'd come to a slow boil in his cryogenic coffin.
His movie has been mutilated. One of the all-time masterpieces of animation, an imaginative, endlessly fascinating, explosively exciting motion picture has, for no apparent reason, been cut by nearly half.
First released in 1945, The Three Caballeros had a running time of 71 minutes. The featurette currently on view, something that is being fraudulently advertised as The Three Caballeros, is 42  minutes long.
(Note to the Department of Consumer Affairs. I'm not kidding when I say fraud. The poster that the current folk at Disney printed up to advertise the film promises one star performer — Mexico's Dora Luz — and two scenes that are not in the shortened version.)
In its original form, The Three Caballeros is absolutely brilliant. Historically, it was both a creative and corporate watershed for Disney.
Prior to the Second World War, Walt Disney was not all that different from any other profit-motivated Hollywood film-maker. During those strictly commercial early years, films like 1937's Snow White and the Seven Dwarfs, 1940's Fantasia and Bambi (1942) had honed his animators' art to a keen edge.
In 1941, the U.S. State Department asked Disney to make a "good-will" tour of South America. To compensate Disney for his time, the government promised to fund several cartoon projects.
Disney agreed, making both the tour and the cartoons.
When the U.S. went to war in late 1941, government contracts began arriving at the Disney studio. The company was able to add sponsored films — military training shorts and propaganda cartoons — to its entertainment film production schedule. Thus did Disney become an institution and an educator.
Regardless of their intended audience, cartoons are still produced by artists. During the war years, the Disney artists were all at the peak of their creative powers. Finally given the opportunity, those same artists, inspired by Latin American music and still slightly stir crazy from from making training films, really cut loose.
The movie they made was The Three Caballeros, a film featuring Donald, the all-American Duck (with the voice of Clarence Nash), opening birthday presents from his Latino amigos, the Brazilian parrot José "Joe" Carioca (José Oliveira), and a Mexican charro rooster named Panchito Pistoles (Joaquin Garay).
The original movie's seven chapters combined live action with animation to introduce U.S. audiences to the history, arts, culture and popular music of their "good neighbours" in the hemisphere. It was by turns beautiful, enchanting, raucously hilarious and thoroughly satisfying.
Never lacking pace or surreal logic, it was and remains a classic.
The film currently on view is but a sampler. Gone is the Joe Carioca song Baia and Dora Luz singing You Belong to My Heart, both hit parade highlights of 1945. Gone is the moving children's Christmas in Mexico sequence, with its explanation of the custom of the piñata.
Gone, too, are Donald's adventures on Acapulco Beach, his Mexican love fantasy and most of the material involving a crazy Aracuan bird. As a result, the parts that remain seem random and disjointed. The film's natural rhythm and balance has been upset.
Giving his audience the best possible show under the circumstances is Richmond Square Theatre manager Cliff Gallant. Realizing that much of the film's square-frame picture is lost when it is projected on the now standard wide screen, Gallant arranged with his projectionist to show the movie in its original 4:3 ratio, the standard in 1945.
Although this means more work — lenses must be changed twice a night — filmgoers are able to see the whole picture and, as an added bonus, a brighter image on the screen. It would please Disney to know that, during his long cold sleep, someone in the movie business still cares about the look of his films.

Afterword: About that birth date. Corporate Disney tells us that its duck star was "born" on June 9, 1934, and this is the date celebrated in the Magic Kingdom's theme parks. It's an "official" birthday, in the same way that our Queen's birthday is officially celebrated in late May in many of her realms, among them Canada and Australia. In fact, Elizabeth II was born on April 21. In Donald Duck's case, that June date recalls the release of 1934's The Wise Hen, his first screen appearance. The March date is based on a shot in the 1949 cartoon short Donald's Happy Birthday, in which we see a calendar with the date March 13 circled and noted as "Unca Donald's Birthday." The year was determined by the late Robert Bishop, a colleague of Steve Wozniak and the co-founder of Apple's R&D Lab in 1978. In addition to his pioneering work in computer coding, Bishop was a Donald Duck superfan. Using evidence from Donald's many cartoon and comic book stories, Bishop made a powerful case for 1914.
Disney's duck has had a long and illustrious career on screen and as a comic book character. For me, the highlights will always be his Hitler-heckling 1943 propaganda short Der Fuehrer's Face (also known as Donald Duck in Nutzi Land), which famously gives the bird to the Nazi dictator, and his piano duet with Warner Bros. duck star Daffy, in 1988's Who Framed Roger Rabbit. Waterfowl fans can also take pride in the fact that Donald is the only duck to have been a co-host of the Academy Awards (1957), and to have his own star on the Hollywood Walk of Fame (since 2005). Today (March 13) is his 102nd birthday.

See also: Donald Duck does not appear in Duck Tales the Movie: Treasure of the Lost Lamp, the 1990 cartoon feature that stars his Uncle Scrooge and nephews Huey, Dewey and Louie.