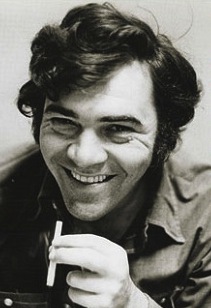 Artist and animation director RALPH BAKSHI in a studio publicity photo issued circa 1978.

What else can I do?


Gambling on a cartooning revolution


Born on this day (October 29) in 1938, director Ralph Bakshi was the first to bring Tolkien's The Lord of the Rings to the screen. Prior to the cartoon feature's release in 1978, the filmmaker discussed growing up in Brooklyn and his dedication to adult animation.

STUDIO PUBLICISTS CALL HIM a revolutionary. The critics say that he's a gambler.
"I'm a cartoonist," shrugs Ralph Bakshi, director of an $8-million animated adaptation of The Lord of the Rings. "I don't see myself as a revolutionary, and making a movie is much more of a producer's gamble."
Once a boxer, Bakshi leans into hls words, as if each thought must be seized physically. "Actually, I'm a film director who happened to start out as a cartoonist. I'm probably a better film director."
A big man with a slight lisp, he looks less like an artist than a bartender, an image reinforced by his easy grin and Brooklyn accent. Conversation is casual, confidential and just a little intimidating. Dressed in blue jeans and a work shirt, Bakshi maintains an air of aggressive modesty.
The publicists are right, of course. He is a revolutionary. Almost single-handedly, he has transformed animation into an adult art form. Remember Fritz the Cat?

The above is a restored version of a Vancouver Magazine feature profile by Michael Walsh originally published in 1978. For additional information on this archived material, please visit my FAQ.