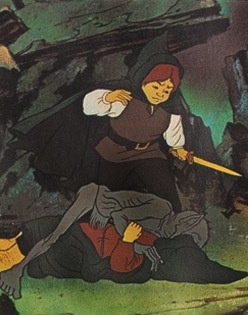 Unlikely allies, Frodo (standing), Gollum and Samwise work out their differences in Ralph Bakski's 1978 feature The Lord of the Rings.


Cartoon grab for the One Ring


Born on this day (January 3) in 1892, author J.R.R. Tolkien lived long enough to see his epic fantasy trilogy embraced by the 1960s boom generation. What he missed was its first film adaptation, director Ralph Bakshi's ambitious animated feature, The Lord of the Rings (1978).

Sunday, December 3. 1978.
THE LORD OF THE RINGS. An animated feature written by Peter S. Beagle and Christopher Conkling. Based on the works of J.R.R. Tolkien. Music by Leonard Rosenman. Directed by Ralph Bakshi. Running time: 133 minutes. General entertainment. ARE YOU READY FOR a controversial cartoon? The $8-million animated adaptation of J.R.R. Tolkien's epic fantasy The Lord of the Rings has finally arrived, and just about everybody who sees it has a strong opinion.
Craig, an animation fan and a cartoon purist, condemns it. He left the film fuming. "There's not seven minutes of real animation in the whole two hours," he complained to me.
Greg, a Tolkien aficionado, was more concerned with the mood of the piece. For him the movie lacked the elements of magic and mystery that first drew him to the books. What he missed most, though, was the sense of majesty that he always felt was a part of Middle Earth and the quest that unites nine unlikely companions in The Fellowship of the Ring.
John, who likes both Tolkien and animation, was not completely satisfied.  But he liked what he saw well enough to want more. "Tell people to go and see it," he said to me.
Why?
"So they'll hurry up and make Part Two," he said.
Becky, who is neither an animation fan nor a Tolkien nut, was thoroughly delighted. For her, Brooklyn-born Ralph Bakshi's two-hour-13-minute gamble was a success. She wants to see it again.
Bakshi, it seems, brings out the critic in all of us. Well, the 40-year-old director knew what he was getting into right from the start. One of an estimated 20 million Tolkien readers, he admitted early on that, when you adapt a classic, there is no way to please everyone.
It should come as no surprise, then, that he is not completely successful. Though I've never read Tolkien's big bold fantasy, I thought that Bakshi's version of the villainous orcs was a pretty moth-eaten one. Indeed, the last third of his movie, a continuous series of battle scenes, is less interesting than it is loud.
On the other hand, the director took Samwise (voice performance by Michael Scholes) and Gollum (Peter Woodthorpe), Frodo Baggins's mismatched allies against the dark power, and turned them into a pair of marvellously memorable characters, Bakshi's musical choices — within an impressive symphonic work by Leonard Rosenman — and voice actors are first rate.
The Lord of the Rings is the story of Frodo (Christopher Guard) the hobbit, and his mission to destroy the One Ring, the most powerful talisman in all creation. In the best Disney tradition, Bakshi has made a feature that contains some supremely frightening scenes.
Although the animation lacks consistency — the current picture is stylistically inferior to his last film, a potpourri fantasy called Wizards — Bakshi is saved by a good story and a solid script by Christopher Conkling and novelist Peter Beagle.
For the first hour, I was prepared to accept The Lord of the Rings as a great adventure story.
A film-maker who dares much, Ralph Bakshi is the man who gave us 1972's Fritz the Cat, followed by Heavy Traffic (1974), and Coonskin (1975). He's not afraid of taking real risks.
It's true that he has yet to make a truly successful film. But, and I think this is important, he's never made a movie that wasn't worth seeing.
*    *    *
TONY WHO? The face may not be familiar, but actor Anthony Daniels is becoming hard to avoid. Last year he won critical acclaim for his work as the fussy robot C3PO in George Lucas's phenomenally successful Star Wars.
Currently he can be heard as the voice of Legolas the Elf, one of the Nine Companions in Bakshi's The Lord of the Rings. Damned if I know what he really looks like, though.

Afterword: Tolkien's reaction to Bakshi's 1978 adaptation will forever be a matter of conjecture, as the author died in 1973. What we do know, though, is that he was generally skeptical of commercial filmmakers, and their ability to get what his books were all about. Even so, he sold the film, stage and merchandising rights to United Artists in 1968. When the studio shelved its plans for a live-action feature, it sold the rights to Bakshi's producer Saul Zaentz. Bakshi's picture, intended as Part One of two features, was a commercial success. Despite that, funding for the sequel was not forthcoming, and the animator went on to a more personal project, 1981's American Pop. In 1980, television animators Arthur Rankin and Jules Bass released their "unofficial" sequel, Return of the King, as an ABC-TV special. A generation later, director Peter Jackson created an international sensation with his live-action adaptation of Tolkien's trilogy — The Fellowship of the Ring (2001), The Two Towers (2002) and The Return of the King (2003). In a 2004 interview, Jackson made the connection to Bakshi's work, acknowledging that the cartoon was his first encounter with Tolkien's epic. A native New Zealander, Jackson has since turned Tolkien's earlier work, 1937's The Hobbit, into its own epic trilogy: An Unexpected Journey (2012), The Desolation of Smaug (2013) and the still-current Battle of the Five Armies (2014).