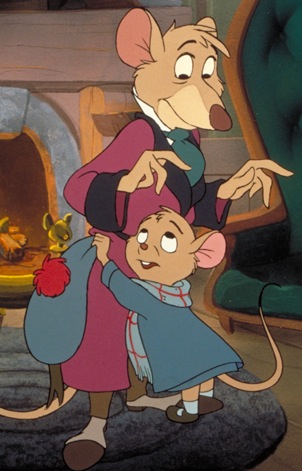 Case for a rodent Holmes


To an earlier generation of filmgoers, Basil Rathbone was Sherlock Holmes. Born on this day (June 13) in 1892, he owned the role in 14 features made between 1939 and 1946. No surprise, then, that the cartoon hero of 1986's The Great Mouse Detective is named Basil.

"DADDY, WHERE ARE YOU?" says Olivia  Flaversham (Susanne Pollatschek) as she comes out of the cupboard in which she's  been hiding. She looks around the messy toyshop to find that her father (Alan Young) and birthday present, a dancing doll, are gone.
Olivia is a toymaker's daughter and a mouse. She goes to Basil (Barrie Ingham), The Great Mouse Detective, to ask him to find her father.
Basil lives at 221s Baker Street in London. In the flat above him, at 221b, lives Sherlock Holmes (Basil Rathbone), the famous human detective, and his colleague Dr. Watson (Laurie Main).
"It was a bat," says Olivia, telling Basil who it was who took her father. It was Fidget (Candy Candido), Basil deduces, the peg-legged, broken-winged bat who does nasty jobs for Professor Ratigan (Vincent Price)!
The Great Mouse Detective is a cartoon-mystery based on the book Basil of Baker  Street. The film is like the Sherlock Holmes mysteries because in them Holmes usually helps young women and has an enemy like Ratigan.
It kept me on the edge of my seat, especially a scene in which Basil and his colleague, Dr. David Q. Dawson (Val Bettin) are trapped and in danger of being killed. It was twice as good as The Black Cauldron, the Walt Disney movie that I reviewed last year. [1985]
The music in the movie was composed by Henry Mancini, who also wrote the music for Santa Claus, The Movie, which I liked very much. Vincent Price is the host of the T.V. show Mystery, where I saw the wonderful English series The Adventures of Sherlock Holmes.
*    *    *
Pauline Walsh is the 9½-year-old daughter of Province movie  critic Michael Walsh. Her father liked the newest Disney release as much as she did. He thinks that the energetic feature is the best animation to come out of the Disney studios in 30 years.

The above is a restored version of a Province review by Pauline Walsh originally published in 1986. For additional information on this archived material, please visit my FAQ.

Afterword: As she points out in the above review, Pauline's first Sherlock Holmes was Jeremy Brett, who made the role his own in four TV mini-series and two TV movies made in Britain between 1984 and 1994. Rathbone, who died in 1975, is heard rather than seen in The Great Mouse Detective. According to the IMDb, the dialogue used in the movie is from Rathbone's reading of The Adventure of the Red-Headed League, released by Caedmon Records in 1966.

Guest star: Other films to benefit from my favourite guest critic's fresh perspectives were the 1987 re-release of Snow White and the Seven Dwarfs and the live-action feature that introduced us to Buffy the Vampire Slayer (1992).