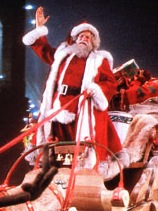 
On the seventh day before Christmas, my TV gave to me . . . Continuing with a list of movies, checked over twice, containing titles both not-my-cup-of-tea and nice. I've chosen an even dozen from the pool of productions endlessly rebroadcast during our ever longer Yuletide. Today (Dec. 18), in a change of pace from The Ref with its seasonal screaming fits, Reeling Back offers 1985's biographical fantasy Santa Claus. You may wish to click the Read More button now, though, as I'm going to take time out to repeat my holiday rant. Although I don't buy any of the "war on Christmas" nonsense peddled by the Fox and Sun news networks, I do regret the front-loading of the season at the expense of the traditional 12 Days of Christmas. The modern mercantile version of the season-to-be-jolly has repositioned December 25, making what was once the First Day of Christmas, the last. Thereafter, it's on to the "after-Christmas" sales. What's been lost is the winter solstice moment, that midwinter festival recognizing the rebirth of the land that comes after the year's longest night. It lasts until Twelfth Night (Jan. 5) and makes good sense regardless of your religious beliefs. It also comes closer to my idea of a merry Christmas.

Friday, November 29, 1985
SANTA CLAUS. Written by David Newman. Music by Henry Mancini. Directed by Jeannot Szwarc. Running time: 106 minutes. General entertainment. LITTLE KIDS LIKE IT a lot. "You gotta give it a nine," one eight-year-old told me after Thursday evening's preview screening of Santa Claus.
"Oh, yeah!'' nodded his nine-year-old friend. No doubt here. Director Jeannot (Supergirl) Szwarc's Christmas-themed fantasy convinced them that reindeer can fly.
Greybeard that I am, I remain skeptical. While the picture certainly is preferable to those  animated atrocities that the television networks pass off as "annual traditions,''  it falls short of the instant classic status to which it so obviously aspires.
The project was conceived by the high-flying Salkinds, Alexander and Ilya, and their production partner Pierre Spengler, the team responsible for the recent Superman (1978, 1980, 1983) features and last year's Supergirl. Assigned the task of manufacturing a film-able myth based on the Santa Claus character was David Newman, a screenwriter who worked on all three Superman projects and scripted the recent Sheena (1984) adventure.
Together with his wife Leslie, Newman came up with the story of Claus (David Huddleston), a big, bearded woodcutter straight out of the Brothers Grimm. Gentle "Uncle'' Claus makes toys for children, delivering them on Christmas Eve.
On one such evening, Claus and his wife Anya (Judy Cornwall) are caught in a blizzard while deep in the forest. Together with their reindeer, Donner and Blitzen, they lose consciousness in the body-numbing cold.
When they wake, they are on a snowy plain beneath a clear, starlit sky. They are greeted by a delegation of little men, who identify themselves as elves.
"The prophecy has come to pass'' the Ancient Elf (Burgess Meredith) explains later. Claus, hereafter to be known as Santa Claus, is "a  chosen one'' for whom the industrious elf-folk have been maintaining a North Pole Shangri-La.
Accepting his mission, Santa Claus learns that it comes complete with magical powers and the gift of eternal life. As in the original Superman film, when he first takes flight the moment is joyously triumphant.
Establishing the traditional Santa takes approximately 40 minutes. The film's remaining hour is taken up with a broadly played satire on the modern commercialization of Christmas.
Causing problems for Santa is a well-meaning, ambitious elf named Patch (Dudley Moore). When his attempts at plant modernization go disastrously awry, Patch leaves the North Pole and offers his services to an unscrupulous, cigar-chomping toy mogul called B.Z. (John Lithgow).
Their initial collaboration proves so successful that the spats-wearing B.Z. (rhymes with "sleazy") insists on an immediate "sequel . . . We'll bring it out on March the 25th, and we'll call it 'Christmas II'."
No Steven Spielberg, Szwarc offers a film that is technically proficient without being particularly involving. As he demonstrated in Supergirl, he is a directorial journeyman with no real gift for bringing his screen fantasies to life.
Even so, his picture has an appeal that is much like a department store's Yuletide display windows. Clearly, some thought and a great deal of money went into making Santa Claus wholesome, harmless entertainment.
The results are pleasant to look at, highly polished and refreshingly non-offensive. It's a picture designed for the subteens and, by golly, they love it.

Afterword: The Salkinds understood the importance of music to their film projects. When it came to composers, they hired the best — John Williams (Superman, 1978), Jerry Goldsmith (Supergirl, 1984) — who could be counted on to give their best. The Santa Claus assignment went to Henry Mancini, an artist whose great popular success seems to have overshadowed any recognition of his serious musical talent. For the Salkinds' feature, he created a wonderful 85-minute score. For me, the single best scene in the movie comes as the result of Mancini's mastery of medley. It's Christmas Eve, the night of our newly minted Santa's maiden flight. He soars into the sky, carried aloft by Mancini's Christmas Rhapsody, an arrangement of traditional carols that includes Deck the Halls, Joy To the World, Hark the Herald Angels Sing, The 12 Days of Christmas, God Rest Ye Merry, Gentlemen,  O Tannenbaum, The First Noel and Silent Night. The genius, of course, is in the arrangement, a work that includes the composer's own symphonic compositions bridging the familiar melodies and making of them a single work propelling the screen images. Indeed, it is Mancini's miracle that convinces the kids that reindeer can fly.