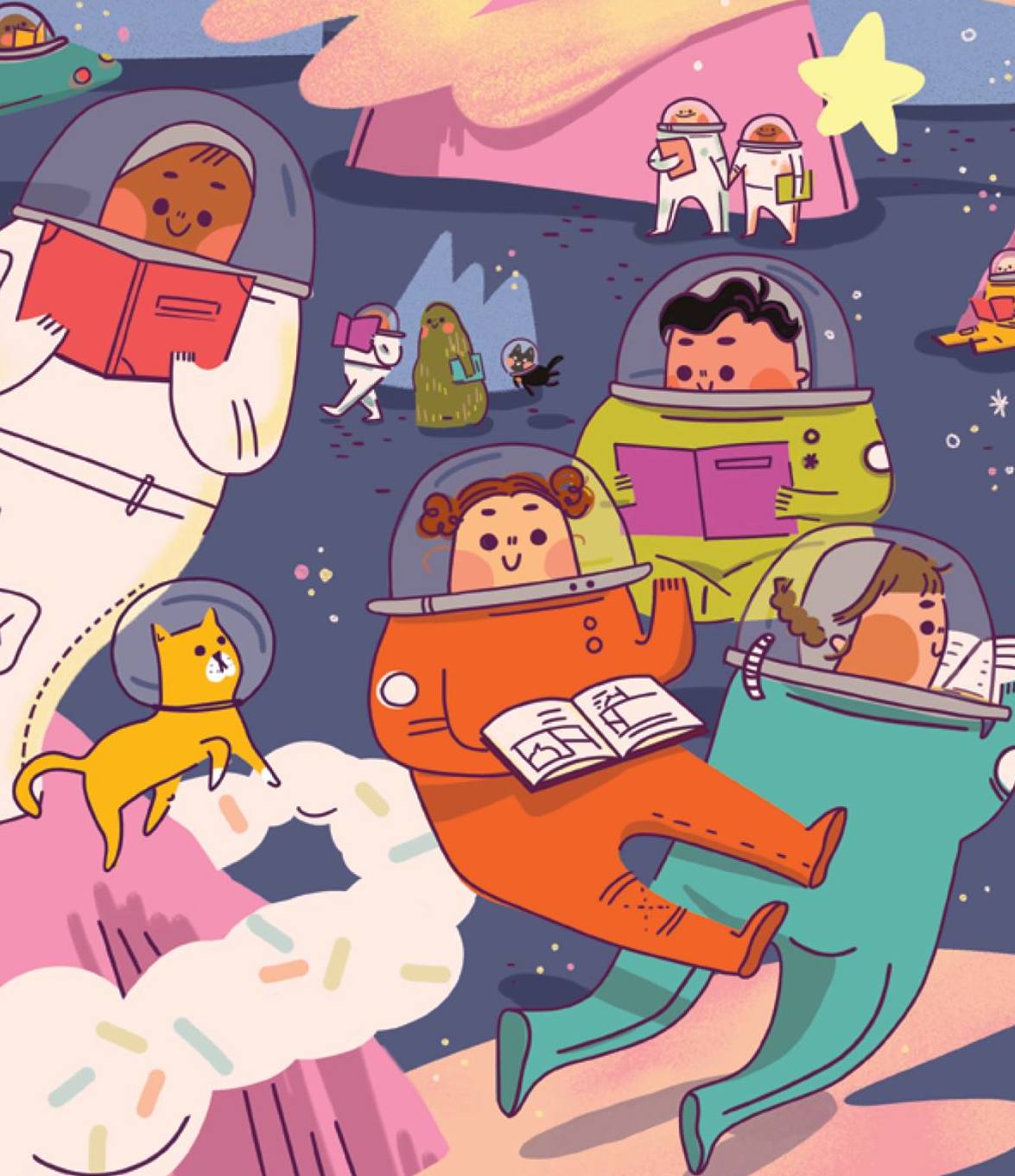 The poster art for Coronavirus pandemic victim VanCAF 2020 was created by Marc Bell.

Comics as a community


If you’d asked me six months ago where I’d be today (May 16), I’d have said “at the Roundhouse Community Arts and Recreation Centre in Yaletown, enjoying Day One of the 2020 Vancouver Comic Arts Festival (VanCAF).” In January, to paraphrase a line from the 1978 Superman movie, Krypton shifted its orbit. The word “coronavirus” entered our vocabulary as the world’s nations confronted a growing public health threat. On March 11, the outbreak was officially declared “a pandemic.” Social distancing and self-quarantines were advised, then ordered. Along with beaches, parks and restaurants, theatres, concert halls, cinemas and arenas closed to prevent large gatherings. On March 23, VanCAF director Isabella Laird announced its cancellation. Founded in 2012 by writer and editor Shannon Campbell as a "free-to-attend community event,” the 2019 edition included more than 260 exhibitors — independent artists and comics publishers — and programming that featured workshops, panel discussions, readings and interviews. Although VanCAF reached out to its community this week with online programming, it was no substitute for the special explosion of creative energy present in the physical assembly of so many talented artists. I missed that unique electricity, and I mean to be there when it returns in 2021. In the meantime, l’ll recall a milestone event from 1971, a Simon Fraser University exhibition called The Comics as an Art Form.

THE BATTLE LINES ARE drawn and the comic world's longest-running cold war is heating up.
National Periodicals, the General Motors of the comic book industry, has introduced three new titles, each with the bannerline "Kirby is here!"
Marvel Comics, National's Volkswagenish competitor, has put the latest edition of The Amazing Spider-Man on the stands without the Comics Code seal.
It's a whole new ball game.
To begin with, Jack Kirby, the 53-year-old creator of Captain America and the original Captain Marvel, has returned to National. It was Kirby, an old Marvel artist from the pre-war golden age, who started the comics conflict in the first place, leaving National 10 years ago to rejoin Marvel.
Behind him was National's DC line, the powerful organization that got its start with Detective Comics in 1937, introduced Superman to the world in 1938, and created Batman a year later. Behind him, too, was National's particular form of stagnation-in-success, a blandness, lack of imagination and total unwillingness to update the product.
Working with Stan Lee, Marvel’s competetive editor-in-chief, Kirby was able to bring about a  revolution in the world of the super hero.
Marvel’s comics have become famous for their breathtaking energy. Dynamic lines, dramatic perspectives and cinematic compositions all combine to create the illusion of motion on the printed page.
More  important, though, is a new writing style. Kirby’s creations might be brightly costumed and endowed with great powers, but they are still human.
Listen to a stuffy-nosed Peter Parker (Spider-Man) as he pulls on his hood: “I can't let a common cold put me out of action. . . ."
Then there is the case of Steve Rogers (Captain America),  who has been battling the forces of evil since the Second World War: “I’m like a dinosaur — in the Cro-Magnon age!”
“This is the day of the anti-hero [1970] — the age of the rebel — and the dissenter! And in a world rife with injustice, greed and endless war — who's to say the rebels are wrong?
"But I've never learned to play by today's new rules! I've spent a lifetime defending the flag — and the law!
"Perhaps I should have battled less and questioned more!”
The new-look Marvels began to make an impact. In New York, a university English professor ordered 46 copies of one issue to use in his course work.
If Marvel made a big impact on college campuses, it made an even bigger impression over at National Periodicals. Marvel’s circulation figures were topping 50 million copies a year, a figure that was dangerously crowding National’s 80 million.
Carmine Infantino, editorial director of the D.C. line, recognized it was time for a change. “Back in 1938, Superman was started on a Nietzsche theory — the world wanted a superman,” Infantino says. “In 1970, people don’t worship icons anymore.”
National began breaking its icons. First came the driving, action-packed drawing style. Next, D.C. comics introduced credit lines, bringing its own authors and artists out of the backroom of anonymity.
Then the characters began to involve themselves with the issues of  the day. Lois Lane stopped chasing the Man of Steel and took up the cause of women's liberation. Robin has left the Bat Cave for college, and the cause of student power. Superman, who appears to be growing more schizophrenic with every issue, is aiding the cause of pollution control.
Finally, National unleashed its ultimate weapon: "Kirby is here!" Currently [1971], Kirby is responsible for three new titles on the stands, New Gods, Forever People and Miracle Man. More are promised.
Perhaps there is no connection but, coinciding with the appearance of National's new Kirby titles is the publication of Marvel's non-Code issue of Spider-Man. It is the first time in the 16-year life of the Code of the Comics Magazine Association of America that a subscribing member has published without the seal of approval,
Marvel took this action despite the fact that the code was extensively revised last month [January 1970] to allow comic writers more freedom in dealing with problems of civic corruption, sex, contemporary language and the occult. Missing  from the new guidelines is any provision for stories dealing with drug abuse.
Lee says that his Spider-Man anti-drug subplot came about as a result of a letter he received from an official at the National Institute of Mental Health, an agency of the U.S. Department of Health, Education and Welfare. The official suggested that Marvel Comics could perform a valuable public service by assisting in the dissemination of factual information about drug abuse.
"We can’t keep our heads in the sand,” Lee says.”I said that if this story would help one kid anywhere in the world not to try drugs or to lay off drugs one day earlier, then it's worth it rather than waiting for the code authority to give permission."
John Goldwater, publisher of the Archie Comics group and president of the self-regulatory association, said that no sanctions will be taken against Marvel. "Everyone," he said, "is entitled to one slip."
The code's talk-tough attitude may be no more than wishful thinking. People in the comics industry have been talking  for  months about planned lines of black-and-white, non-code comics from both Marvel and National. The stark new rebels would return to the pre-code days of crime, adventure, horror and science-fiction.
If that happens, the Comics Code could go the way of television’s late movie code. The battle on the  newsstand has only begun.

The above is a restored version of a Province Spotlight magazine feature report by Michael Walsh originally published in 1971. For additional information on this archived material, please visit my FAQ.

Afterword: To paraphrase a line from 1981’s Raiders of the Lost Ark, “Comics! Why did it have to be comics?” In a previous posting, keyed to 2014’s VanCAF event, I confessed that my first daily newspaper publication (in the Toronto Star) was a feature on “comicology,” the passion shared by members of Canada's Academy of Comic Book Collectors. At the time (1966), I was a second-year student at the University of Toronto majoring in (of all things) sociology. Too clever by half, I’d convinced my class tutor to let me write a single “major” paper during the term, instead of the several briefer assignments otherwise required. Yes, I was looking to avoid work. In the process, I learned that I was nowhere near as smart as I thought I was.
My chosen topic was Frederic Wertham’s 1950s crusade against crime and horror comics. Because I knew that comic strips had long been the subject of serious critical consideration, It stood to reason that everything I needed would be contained between the covers of a couple of books in the university’s Sigmund Samuel Library. How wrong I was. As it turned out, comic books were not yet the subject of respectable academic study. Aside from Wertham’s own screed, 1954’s Seduction of the Innocent, the only other book out there was Jules Feiffer’s pioneering work The Great Comic Book Heroes (1965). I was on my own, suddenly faced with the necessity of doing "primary research," which involved seeking out contemporary sources, piecing my story together from old newspapers, magazines, government documents and passing references in other works. My finished paper was 68 pages of typewritten text, notes and (photocopied) illustrations. To this day, I have no idea if my tutor knew that my work-avoidance ploy would turn into a real challenge (and teach me a valuable lesson in the process). Regardless, I did get an A on the result.
Half a century later, comic books are taken very seriously. As early as 1974, I was able to review three history books, each one surveying a different aspect of the art. Currently, I have more than a 100 titles on my shelves labelled “comics history.” Among my favourites are Gerald Jones’s 2004 Men of Tomorrow: Geeks, Gangsters and the Birth of the Comic Book, a superb social history, and Hope Nicholson’s 2017 The Spectacular Sisterhood of Superwomen: Awesome Female Characters from Comic Book History, an encyclopedic survey with a feminist point of view. Finally, I can’t say enough good things about Shawna Kidman’s 2019 Comic Books Incorporated: How the Business of Comics Became the Business of Hollywood. A political economist and media scholar, she retells the now familiar story from the perspective of corporate infrastructure. In doing so, she makes an important new contribution to our understanding of both the art and influence of a marvellous medium.