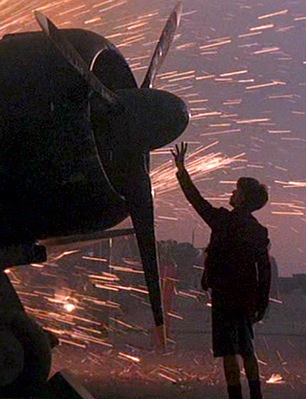 For the 13-year-old James Graham (Christian Bale), internment within Japan's Empire of the Sun is a phantasmagoric adventure.


He had a special talent for fever dreams. J.G. Ballard, born on this day (Nov. 15) in 1930, could have taught Philip K. Dick a thing or two about the creation of hallucinatory fiction, a byproduct of the fact that, as a child, he was witness to the extremities of the Second World War in Asia. The Shanghai-born Ballard's worldview was shaped by experiences that included confinement in a Japanese internment camp, medical studies at an English university and military service at a Canadian airbase. He came of age as a science-fiction novelist in the early 1960s, an influential member of the British-inspired "New Wave" that emphasized literary rather than scientific experimentation. His dystopian visions, particularly his 1979 short story collection The Atrocity Exhibition, were embraced by American underground and counterculture intellectuals. Surprisingly, only two of his 18 novels have made it to the big screen. In 1996, Canada's David Cronenberg channelled Ballard's spirit with chilling accuracy in his adaptation of the novel Crash. Earlier, in 1987, Ballard's phantasmagoric war memoir, Empire of the Sun, received the major motion picture treatment from Steven Spielberg.

Thursday, December 10, 1987
EMPIRE OF THE SUN. Written by Tom Stoppard, based on the noveI by J.G. Ballard. Music by John Williams. Co-produced and directed by Steven Spielberg. Running time: 152 minutes. Mature entertainment, with the B.C. Classifier's warning: Some violence, occasional swearing. WHO WOULD HAVE believed it? Bernardo Bertolucci, the Parmesan poet of proletarian revolution, has made a better popcorn picture than Steven Spielberg.
The Last Emperor, the leftist Italian director's look at the life of China's last dynastic ruler, is an eye-filling crowd pleaser. Empire of the Sun, the Hollywood wunderkind's adaptation of James Graham Ballard's wartime memoir, seems slow and plodding by comparison.
Comparisons are, of course, inevitable. Both films are examples of the cinema's most ambitious form, the intimate epic.
Both are period pieces based on true stories of privileged young men cast down by historical events. Both pictures run more than two and a half  hours, and both were shot on location in the People's Republic.
The surprise is that Bertolucci, best remembered for his glumly academic sex epic Last Tango in Paris and the deadly-dull political soap opera 1900, has gone Hollywood. The European auteur manages to turn the tale of Pu Yi into a magnificently watchable melodrama.
Spielberg, on the other hand, offers strained seriousness. The American genius who gave us such high-powered mass entertainments as Jaws, E.T. and Raiders of the Lost Ark, he now seems determined to win over the literati.
Responses varied to his first attempt, a lush adaptation of Alice Walker's novel The Color Purple. The downbeat tale of an abused black woman, it was more an example of cinematic good works than popular movie-making.
With Empire of the Sun, he returns to somewhat more familiar ground. The time is December, 1941, and James Graham (Christian Bale) is an 11-year-old aviation buff, the son of a well-off English mill owner.
The setting is Shanghai, a city about to be occupied by the forces of Imperial Japan. Jim's adventure begins the day of their arrival when, in the press of a crowded street, he is separated from his fleeing parents.
For the next three years, the boy is on his own, first living as a street kid and then behind the wire of the Soochow Creek internment camp. In the process, a pampered son of empire learns the art of day-to-day survival in a world at war.
Credit Spielberg with ambition.
Ballard is no ordinary writer, and his is not a standard war novel. It can be argued that his internment, far from being an ennobling experience, shaped the profoundly pessimistic worldview expressed in his science fiction. Humanity does not fare well in his tale of Jim Graham.
Spielberg is the cinema's Peter Pan. Optimistic in outlook, he can't help but look for the good in people, and here he produces that apparent anomaly, a war movie with malice toward none.
As written by Tom Stoppard, it is a story that is surreal rather than gritty. Though we can infer that Jim's strength is based on self-centred realism — he quickly learns to play Prince Mouse to Basie (John Malkovich), the camp's American King Rat — Spielberg softens the impact with a kind of visual romanticism.
The movie is at odds with its own material, because its director appears to believe in the essential innocence of the child and tries to see the beauty in his world, despite death marches, destruction and despair. The result is a fascinating failure.

Afterword: It's obvious that something in Ballard's vision spoke to Steven Spielberg. Though the director was unable to reconcile their opposing ideas of childhood — Ballard wrote that the film "hijacked" his memories — he would turn to the works of dystopian authors on at least two more occasions. Ballard's fellow New Wave colleague Brian Aldiss wrote the short story that inspired 2001's A.I. Artificial Intelligence, and Philip K. Dick gets the credit for Minority Report (2002). As mentioned above, writer/director David Cronenberg was the one who got Ballard right. His 1996 adaptation of Crash, a story of sexual fetishists aroused by car wrecks, was controversial and occasionally the subject of censorship, but it was true to its source material.