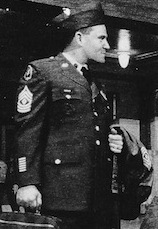 
Born on this day (June 8) in 1946, Alan Scarfe is part of the B.C. film story. An accomplished stage actor, his commanding presence inspired writer-director Jack Darcus to create the character of Ulysses Hawley, an obsessed U.S. Army sergeant in pursuit of Deserters (1983).

Thursday, December 13, 1983.
DESERTERS. Music by Michael Conway Baker. Written, art directed, edited, co-produced and directed by Jack Darcus. Running time: 93 minutes. Mature entertainment with the B.C. Classifier's warning: some very coarse language and swearing. FOR DIRECTOR FRANCIS FORD Coppola, America's Vietnam war experience was "essentially a Los Angeles export, like acid rock." His response was a multimillion-dollar phantasmagoria, 1979's Apocalypse Now.
Jack Darcus also recalls the war years. A Canadian, he examines his own intense reactions in Deserters, a close-up, low-budget drama set not in the Southeast Asian jungle but in urban Canada.
His story unfolds around Val Manufort (Barbara Marsh), the unhappy wife of a cause-oriented Vancouver immigration officer named Noel (Dermot Hennelly). Involved with issues of truth, justice and draft resistance, Noel offers after-hours counselling to the confused young Americans who come through his door seeking the sanctuary of landed immigrant status.
The time is 1969. Noel insists that Peter (Jon Brydon), a dodger more out of fear than principle, spend the night in their spare room.
He offers the living room couch to Sgt. Ulysses Hawley (Alan Scarfe), a crusty combat veteran who claims to be a deserter.  Although Noel accepts the sergeant at face value, the burly soldier's presence upsets both Peter and Val.
Developed by screenwriter Darcus and Vancouver's New Play Centre, Deserters was performed in workshop at the Waterfront Theatre before going on location for filming. It evolved as a vehicle for actor Scarfe, who brings a sinister authority to his role.
Hawley is using Noel. A man fond of telling a dark, unfunny "joke" about Viet Cong perfidy, he crossed the border in pursuit of two specific deserters.
He is convinced that if he can just lock eyes with the craven draftees (Bob Metcalfe and Robin Mossley), the sheer force of his righteous personality will return them to their duty.
During his long night in Canada, he locks eyes with everyone who comes within sneering distance. In the process, director Darcus offers some gloves-off commentary on the dynamics of male relationships and U.S.-Canadian social differences.
Each of the men, as it turns out, is a walking tangle of hangups. The one to feel sorry for is Val, a reasonably sane sort caught in an emotional melee involving a wimp, a twit and a tyrant.
Booked for just one week, Deserters is being shown here in order to quality for 1983 Genie Awards consideration.

Afterword: The Academy of Canadian Cinema considered Deserters worthy of nomination in six Genie Award categories, including best actress (Barbara March), actor (Alan Scarfe), direction, screenplay and editing (all Jack Darcus) and music score (Michael Conway Baker). Although Scarfe lost the 1984 Genie (to Eric Fryer, who played the title role in The Terry Fox Story), he won the supporting actor honour a year later, for his performance in writer-director Daniel Petrie's East Coast family drama, The Bay Boy. The British-born Scarfe, who celebrates his 69th birthday today (June 8), enjoys a prominent place in Vancouver's film history. He made his feature debut in first-time director Larry Kent's The Bitter Ash (1963), one of the founding features in the story of B.C.'s modern movie industry. Twenty years later, Jack Darcus would create the role of Sgt. Hawley for him. An established stage and screen presence, Scarfe had six seasons as a principal player at Ontario's Stratford Shakespeare Festival to his credit. Darcus, with three previous features in release, was becoming the B.C. film community's ranking auteur. He went on to direct four more features — Overnight (1986); Kingsgate (1989), The Portrait (1992); and Silence (1997) — all of them featuring Scarfe. In 1979, Scarfe married actress Barbara March, who co-starred with him in Deserters, Kingsgate and The Portrait. Science-fiction fans will remember Scarfe from his guest starring roles on such TV series as Quantum Leap, Star Trek: The Next Generation, Star Trek: Voyager, The Outer Limits, Stargate: Atlantis and Andromeda.
Fun fact: In a 1993 Next Generation episode, Alan Scarfe played a Romulan named Tokath, who boasts to Lt. Worf that "I married a Klingon." Two years earlier, his real-life wife Barbara March had played Lursa, a member of Klingon's Duras clan, on NextGen. Together with fellow Vancouver actress Gwynyth Walsh (who played her sister B'Etor), March reprised her Lursa role in episodes of Voyager and the 1994 feature film, Star Trek: Generations.