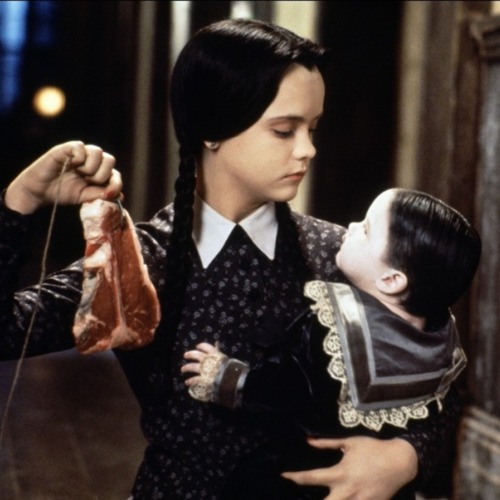 
One week out of sync with the other six Canadian provinces that observe a February holiday, B.C. marks its Family Day today (February 9). That West Coast determination to be different brings to mind the comics-inspired feature comedy from 1993, Addams Family Values.

Sunday, November 21, 1993.
ADDAMS FAMILY VALUES. Written by Paul Rudnick, based on characters created by Charles Addams. Music by Marc Shaiman; theme music by Vic Mizzy. Directed by Barry Sonnenfeld. Running time: 94 minutes. Mature entertainment with the B.C. Classifier's warning "occasional suggestive language and swearing." DON'T YOU JUST LOVE the house?
As we paid our return visit to the Addams Family mansion, I was reminded of Peter Lorre's wonderful ad-lib in Roger Corman's 1963 horror comedy The Raven. Finding dust on a coffin in a medieval castle's crypt, he grinned and said, "Hard place to keep clean, eh?"
The new Addams Family feature winds up with a scene in their private cemetery. We could all see it coming, a finale that parodied the shock ending of Brian De Palma's 1976 thriller Carrie.
Don't you just love it when everything in a movie reminds you of something else? The utter lack of innovation in Addams Family Values certainly makes my job easier.
Reassembling almost all of the cast of 1991's The Addams Family, director Barry Sonnenfeld offers a toast (in the words of paterfamilias Gomez) "to all that brings a family together. To mirth. To merriment. To manslaughter."
It's amazing, the amount of energy and commitment a first-rate cast can put into material as lame as this. Indeed, performance and set decoration are the strongest elements in this insistently derivative film.
Holding it together are a 13-year-old girl and a nearly 30-year-old musical theme. Composer Vic Mizzy's finger-snapping signature tune, used to introduce the half-hour Addams Family television series (1964-1966), emerges as a living character in the second feature.
Christina Ricci, whose performance as the Addams's sepulchral daughter Wednesday was the comic hit of the first film, takes centre stage in the sequel. Self-confident and unsmiling, she easily steals the show.
Writer Paul Rudnick's screenplay is essentially a series of skits, weaving together three story threads. The film opens with Morticia (Anjelica Huston) giving birth to baby Pubert Addams.
Episode 1 involves some sibling rivalry between the newborn, sinister sister Wednesday and brother Pugsley (Jimmy Workman). Perky, blond nanny Debbie Jelinsky (Joan Cusack) is hired to take the kids in hand.
In Episode 2, Deb turns out to be a husband-slaying serial killer known as the Black Widow (recalling the 1987 thriller of the same name). She's after lumpish, lovelorn Fester (Christopher Lloyd), and when Wednesday sees through her, the kids are packed off to summer camp.
Episode 3, their Revenge of the Nerds-like adventures at Camp Chippewa, runs parallel to Fester's predictable marital problems. It's the only really funny thing going on, mainly because Wednesday — cast as Pocahontas in the camp's Thanksgiving pageant — is a character with somewhere to grow.
Not so papa Gomez (Raul Julia), or any of the other adult members of the cast. As Lady Colyton said in her commencement address establishing a Charles Addams Memorial Prize at the University of Pennsylvania: "His work was a social commentary on an era."
Cartoonist Addams's era — the 1930s — was establishmentarian and class-conscious, one in which a respect for custom, law and order coexisted with xenophobic, unthinking racism.
Comically outrageous, his flamboyantly ethnic Addams family were the scary outsiders who lived in an old, dark house; reclusive, mysteriously rich and uninterested in being Anglo-American.
Their era is long past. With the exception of Wednesday, a '90s kind of weird kid, Addams Family Values has nothing to offer but sappy, soft-core nostalgia for television-style comedy.
Don't you love it?

Afterword: Christina Ricci made her feature debut at the age of 10, stealing scenes from Winona Ryder, who played her older sister in the quirky 1990 comedy Mermaids. The Addams Family features made her a star, and she was even permitted the occasional smile as the lonely girl who befriends the friendly ghost in 1995's Casper. The same year, she made a visit to Vancouver to play a big city kid adjusting to small town life in Gold Diggers: The Secret of Bear Mountain. In 1997, she segued from the starring role in a Disney film (That Darn Cat) to the chillingly adult portrayal of a sexually manipulative teen in director Ang Lee's The Ice Storm. With occasional big-budget exceptions — co-starring with Johnny Depp in Tim Burton's 1999 Sleepy Hollow, for example — Ricci has preferred to work in interesting, independent pictures. Included among them is the now-classic, blues-inflected Black Snake Moan (2006), the story of a godly black man (Samuel L. Jackson) who brings salvation to a sex-addicted white woman.
And let's not forget Vancouver-born Mercedes McNab, making her second appearance in an Addams Family feature (as Wednesday's Camp Chippewa nemesis Amanda Buckman). McNab went on to play the young Susan, in the 1994 adaptation of the Fantastic Four comic book, before taking on the role of Sunnydale High student Harmony Kendall in TV's Buffy the Vampire Slayer (1996-2001). Graduation day saw her character move on, and the undead Harmony eventually joined the cast of the Buffy spin-off series, Angel (2001-2004).