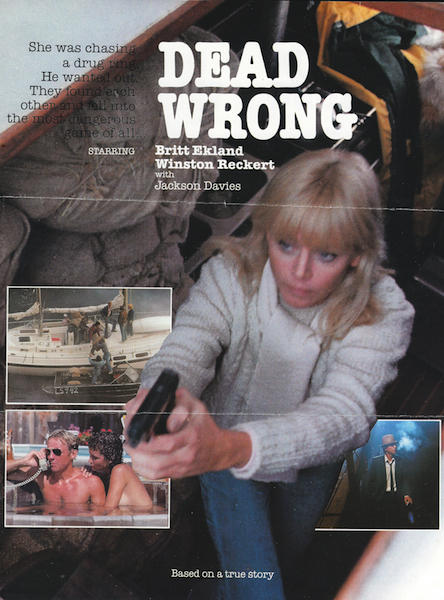 Winston Rekert’s name is misspelt while his co-star Britt Eckland gets all the attention on a promotional flyer for director Len Kowalewich’s 1983 crime thriller Dead Wrong.


So Canadian to play cops for laughs


After establishing himself as a movie star in Central Canada, Winston Rekert returned to Vancouver to take on a new challenge. Born on this day (June 10) in 1949, he was cast as the hapless hero of director Len Kowalewich’s independently-made action feature, 1983’s Dead Wrong.

DEAD WRONG. Written by Ron Graham. Music by Ken Kobylansky. Directed by Len Kowalewich. Running time: 94 minutes. Rated Mature entertainment with the B.C. Classifier’s warning: some swearing, occasional very coarse language, violence and nudity.  SEAN PHELAN (WINSTON REKERT) is all for free enterprise.
The bank, unimpressed with his business acumen, is about to foreclose on his independent fishing boat. Partly because he’s desperate and partly because he believes that “it's no different than smuggling booze during Prohibition,” he agrees to sail up the coast with a load of Colombian marijuana for his fast-living friend Mike Brady (Dale Wilson).
Phelan decides to trust Brady, a decision that’s Dead Wrong.
Len Kowalewich is a case study in free enterprise. A TV director, he managed to get an independent B.C. feature film made and into U.S. distribution, all without the permission or participation of the Central Canadian Film Development Corporation.
Together with his executive producers, BCTV news readers Tony Parsons and Pamela Martin, Kowalewich put the deal together right here in Vancouver, and the project went before the cameras two years ago [1981] as The Colombian Connection.
The idea was to produce not art, but salable action market fare. The result, though dramatically uneven, is likely to recoup its modest $750,000 budget for local investors.
The film features a little guy in a no-win situation. Without telling his partner Phelan, Brady plans to move up the drug-dealing ladder, and has added 15 kilos of cocaine to his purchase order.
Without telling Brady, his Mexican pot connection Bahama Jones (Leon Bibb) has sold out both Canadians. According to RCMP Inspector Mullins (Don MacKay), “the force needs a victory in the war against drug crimes,” and Jones is more than happy to throw them a couple of small fish.
Co-ordinating surveillance is Insp. Fred Foster (Jackson Davies), while federal policewoman Priscilla "Penny Lane" Lancaster (Britt Ekland) goes undercover to make herself welcome on Phelan's 41-foot ketch.
Thickening the plot still further is the fact that the local mob's coke franchiser knows of Brady's side order, and has added an enforcer (Alex Daikun) to the list of people out to get the troubled Phelan.
True to its Canadian roots, Dead Wrong has a somewhat sardonic sense of humour.     Although the bad guys are really bad, the cops, for the most part, are played for laughs, a mixture of moods that just doesn't gel.
Technical polish is the film's saving grace.
Vancouver craftsmen and women have produced a sharp, professional product, with special praise due to cinematographer Doug MacKay for his contribution to the overall look.

Afterword: The Academy of Canadian Cinema also was impressed with Vancouver’s craftsmen. Doug McKay and composer Karl Kobylansky were nominated for cinematography and music score honours at the 1984 Genie Awards. Despite my suggestion in the above review that Dead Wrong “ is likely to recoup its modest $750,000 budget for local investors,” that didn’t prove to be the case. According to a trivia note attached to the film’s IMDb page, “the movie lost money.” A three-year-long financial headache for producer-director Len Kowalewich, it remains his single feature film credit.
The picture proved to be a less than successful homecoming for Vancouver-born actor Winston Rekert. After honing his professional acting chops as a member of the Arts Club Theatre Company, he had gone east to make his feature film debut. He played Nicky, the bad boy in a melodramatic love triangle in Montreal writer-director Robin Spry’s 1980 drama Suzanne. He also featured prominently in 1981’s Heartaches, Don Shebib’s underrated comedy that starred Margot Kidder. His reputation for versatility was well established when he arrived back in town for The Colombian Connection (later released as Dead Wrong), his sixth feature. It’s troubled history did not affect his bankability, though, and Rekert went on to make nine more theatrical features, including director Tom Shandel’s 1984 prison drama Walls, Norman Jewison’s Agnes of God  (1985) and Larry Kent’s mock noir comedy High Stakes (1986).
In common with many Canadian talents who chose to remain in Canada, Rekert spent much of his career working in television. He became best known for the two series in which he had the title roles. In the made-in-Toronto action-comedy Adderly (1986-1988), he was V.H. Adderly, a secret agent injured in the line of duty who refuses to be sidelined. Returning to Vancouver, Rekert starred as Michael Terry, the Neon Rider (1989-1994), a celebrity therapist who devotes himself to treating troubled teens. A co-creator of the show, it marked his debut as a writer and director, and led to his involvement as a spokesman for such socially active groups as Youth at Risk. He died at the age of 63 in 2012, after a three-year battle with cancer.