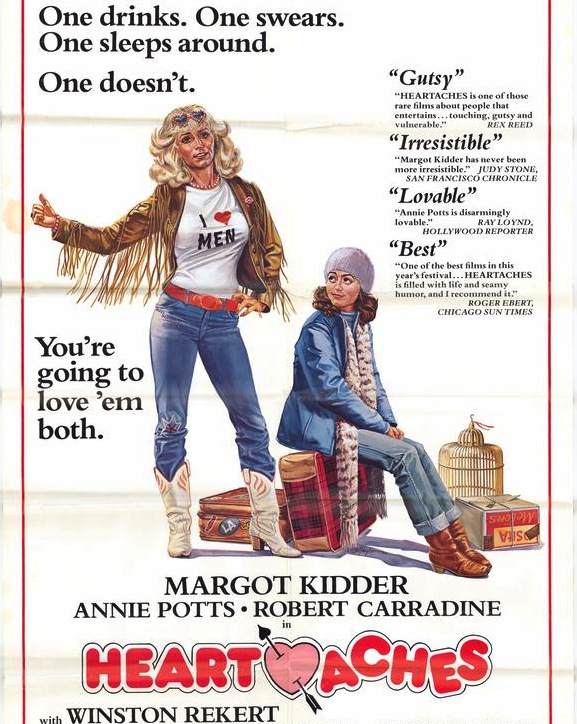 Secret too good to keep


Shebib goes down the road again


Although she was born in Yellowknife, capital city of the Northwest Territories, Vancouver considers Margot Kidder one of its own. Today (October 17), on the occasion of her 66th birthday, we recall one of her most showy roles, as Rita Harris, in the 1981 comedy Heartaches.

Wednesday, March 31, 1982
HEARTACHES. Written by Terence Heffernan. Music by Michael Martin. Directed by Don Shebib. Running time: 92 minutes. Mature with the B.C. Classifier's warning: some very coarse language. THEY LAUGHED WHEN JOHNNY Carson introduced the men from Price Waterhouse and Company. Although it qualifies as one of accounting's multi-nationals, PW&C is best known as the company that handles the annual Academy Awards balloting, returning the results in those famous sealed envelopes.
"And," said Carson on Monday night [March 29, 1982], "I must say that (they) really know how to keep a secret. They also handled the distribution of Atlantic City."
The audience laughed. Film industry people know the important role distributors play in getting their pictures before the public. Alas, the distributor of Atlantic City has not been as aggressive in the promotion of the Louis Malle drama as it might have been.
In Canada, of course, such tales of woe are a way of life. This week, for example, Price Waterhouse appears to have been in charge of the Vancouver premiere of Heartaches,  Don Shebib's robust new romantic comedy.
Now, here was a real challenge for a distributor — a film just bursting with secrets to keep. To start with, it has to ignore Don Shebib, one of English Canada's most distinctive directors and, arguably, an international trend-setter.
The Toronto-born filmmaker is much honoured as a Canadian feature-film pioneer (for his 1970 drama Goin' Down the Road.) Less well known, unfortunately, is his intimate little Second Wind (1976), a finely-wrought film about an amateur sprinter, and the precursor of such pictures as Personal Best (1982) and Chariots of Fire  (1981).
The Heartaches distributor had to be especially careful in Vancouver. The big secret here involves two of the film's stars, a pair of performers with strong local connections.
Margot Kidder, who grew up here, pulls out all the stops to play Rita Harris, a brassy, independent young woman full of energy, initiative and romantic fantasies. When Rita meets Bonnie Howard (Annie Potts), a mousy little wife running away from a car-crazy husband, she sees a sister who needs help.
Bonnie's problem is that she is pregnant, and not by her lawfully wedded Stanley (Robert Carradine), but by one of his beer-drinking buddies. Rita takes charge, finding them walk-up lodgings and jobs in a downtown Toronto factory.
As it turns out, Mario Di Stassi's San Martino Mattress Company is one big Italian-Canadian family. Rita soon has her cap set for the boss's ever-so-continental nephew, Marcello (Winston Rekert).
Rekert, of course, is another Vancouver link for the film. One of the domestic feature industry's most impressive new acting talents, he's already been seen in 1980's Suzanne and 1981's Finishing Touch [later retitled Your Ticket Is No Longer Valid], and stars in the locally-produced The Columbia Connection [released in 1984 as Dead Wrong]. In Heartaches he shows his fine comic timing.
Earlier this year, the picture managed to net 11 Genie Award nominations, including best picture. Kidder was a winner in the best actress category, and writer Terence Heffernan collected the best original screenplay Genie.
Not only is the distributor keeping the picture's awards a secret, but they're not mentioning the fact that Heffernan ("a real black Irishman and the only really talented screenwriter in Canada," according to Shebib) currently lives in Victoria, B.C.
To keep all of these things secret required a masterful plan. It involved opening the picture on the eve of the Academy Awards broadcast with no press previews, no promotion and no attempt to exploit any of the solid local-interest angles.
It worked, too. Heartaches closes tonight after an indifferent week's run at the Fine Arts Cinema.
*    *    *
FUNNIEST THING. Rising Star Film Productions was not at all shy in late 1980, during its campaign to sell share units in the film. At that time, I received an attractively-printed folder labelled "Heartaches — an excellent investment opportunity."
The main question was addressed directly.
"What Makes It Such A Good Deal?"
The answer was set out in point form.
"1. Outstanding popular stars;
"2. Top producers;
"3. Wide audience appeal of the kind that made such hits as Midnight Cowboy and The Goodbye Girl;
"4. The film is filled with action, passion, laughter, tears;
"5. Acclaimed director;
"6. Already in full production with principal photography to be completed by December 20, 1980;
"7.  Already received production funding from the Canadian Film Development Corporation and from the largest theatre chain in Canada, Famous Players of Canada;
"8. The film offers qualified investors the opportunity to write off 100 per cent of this investment while making a minimum down payment of 20 per cent."
Investors who took advantage of this "good deal" will be happy to learn that neither Shebib nor his stars shortchanged them.
They may wonder, though, why its distributor has turned Heartaches into a state secret.

Afterword: The movies and Canada have a long history together. Films were first screened here in 1896. Films were first shot here in 1897, and the first all-Canadian feature, Evangeline, was released in 1913. In all that time, no Canadian government has managed to get its act together on the subject of cinema. Policy makers never could make up their minds. While some viewed it as an art (an aspect of Canadian culture deserving some degree of encouragement), others preferred to see it as just another industry (an aspect of the Canadian economy, to be helped along with job-creation programs). Both approaches concerned themselves with getting movies made. Neither addressed the problem of getting pictures seen. The elephant in the room was (and remains) a theatrical distribution system controlled by foreign corporations for the enrichment of foreign shareholders, a system no government has dared to challenge.
Director Don Shebib's Heartaches was made during the eight-year period (1974-1982) now remembered as the "tax-shelter boom," a production surge brought about by the introduction of a federal Capital Cost Allowance that offered investors a 100-per-cent tax writeoff. Among those who survived  that Canadian cinema moment were Margot Kidder and Shebib, who remain active in the industry to this day. In 2011, Shebib released Down the Road Again, reuniting Doug McGrath and Jayne Eastwood in a sequel to his 1970 story. Kidder, whose two most recent film roles were in the 2014 Canadian features Pride of Lions and The Big Fat Stone, continues to make her voice heard as a celebrity activist in the fight against the Keystone XL pipeline extension.

See also: For a detailed autopsy of the tax-shelter deal behind the 1981 animated feature Heavy Metal, click through to Financing Heavy Metal  and The Art of Heavy Metal.