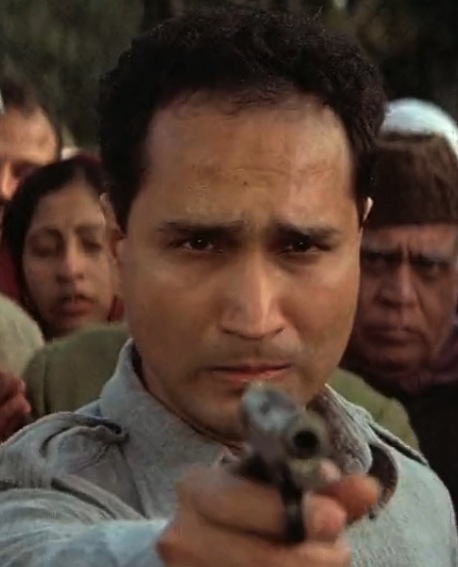 Nathuram Godse (Harsh Nayyar) changes the world by squeezing his finger, firing the shots that end the life of the Mahatma in director Richard Attenborough's Gandhi (1982).


Revolution brought about by example


History, according to one theory, is made by great men. Its course, for better or worse, can be altered in an instant by any man. That's the essence of the message that the spirit of John Wilkes Booth conveys to a suicidal Lee Harvey Oswald in Stephen Sondheim's provocative 1990 musical, Assassins. "And all you have to do is squeeze your little finger . . ." Booth croons. "You can change the world." On this day (January 30) in 1948, Hindu nationalist Nathuram Godse changed his world by murdering the internationally revered Mahatma Gandhi. Though tried, convicted and executed for his crime, he remains a hero among a sufficient number of Indians to be the subject of a new movie, Desh Bhakt Nathuram Godse (Patriot Nathuram Godse), a documentary aimed at rehabilitating the assassin's reputation at a time of increased nationalism in the world's largest democracy. (Though scheduled for release today, a civil suit has been filed to ban the film from reaching the screen.) To date, Godse has been portrayed in three fictional features. In 1963, just seven months before the assassination of John Kennedy, audiences were offered Nine Hours to Rama, an Anglo-American co-production in which Horst Buchholtz offered a humanized portrait of Godse. In 2000, a Hindi/Tamil-language crime thriller called Hey Ram (Oh, god) treated his story with sufficient taste for it to be submitted by India's government for consideration by the Oscar selection committee for a foreign-language picture nomination. Godse's moment is relived most memorably in the opening scene of director Richard Attenborough's classic historical biography, 1982's Gandhi.

Friday, January 28, 1983.
GANDHI. Written by John Briley. Music by Ravi Shankar. Orchestral score and additional music by George Fenton. Produced and directed by Richard Attenborough. Running time: 188 minutes. Mature entertainment.
Whatever you do, do not deify him. That is what we have done in India. and he was too great a man to be deified.
— Pandit Jawaharlal Nehru to
Richard Attenborough, Nov. 1963.

THE CHALLENGE WAS IMMENSE.  Over lunch in a London restaurant, an intense Indian-born gentleman named Motilal Kothari set out to convince actor Richard Attenborough that he should produce and direct a film on the life of India's Mahatma Gandhi.
To be successful, such a film would have to offer filmgoers the sweep of history, put across the humanity of its central character and include the essence of his message. It would have to overcome the tendency of such films to collapse into meaningless pageantry, trivialization or polemic.
Attenborough's meeting with Kothari was in December, 1962. A few days later, he agreed to take up the project, not realizing that the picture would be 20 years coming to the screen.
We'll never know what the result would have been had the film gone into production on its first announced start date: October 2, 1965. Despite his credits as a producer, "Dickie" Attenborough had no previous experience as a motion picture director.
In the end, principal photography on the Gandhi project commenced November 26, 1980. During its generation-long gestation period, Sir Richard Attenborough had directed four features, a list that includes 1969's Oh! What a Lovely War,  Young Winston (1972), A Bridge Too Far (1977) and Magic (1978).
The result of Attenborough's persistence is a magnificent gift to the filmgoer. Working from an absolutely brilliant script by John Briley, he's met every challenge. His Gandhi is a major screen success.
But who, you may say, is Gandhi? Believing that Mohandas Karamchand Gandhi (1869-1948) was, is and will continue to be a relevant historical figure is one thing.
Convincing an audience reared on television is quite another. Attenborough, to his credit, wastes no time grabbing filmgoers by showing us that Gandhi is tonight's news.
His film opens with a face in the crowd: a troubled, impassioned, purposeful face.
It might be an Oswald, a Sirhan or the Jackal. Actually it's Nathuram Godse (Harsh Nayyer), the man who murdered the Mahatma on the morning of January 30, 1948.
We see the shots fired — the first words heard in the film are Gandhi's "Oh, God!" — and the film cuts immediately to a state funeral so immense that filmgoers who know nothing of the historical Gandhi can't help but want to know more about this remarkable little man.
His story begins in South Africa in 1893, where the young Indian-born, British-trained lawyer has his first encounter with officially sanctioned racial intolerance.
Gandhi's response is to organize a protest against the discriminatory pass laws of the government of Prime Minister Jan Smuts (Athol Fugard), where he publicly burns the hated pass card.
For the first time, he preaches his philosophy of non-violent resistance. For his trouble, he is savagely beaten by police, and generates his first headline in The Times.
With swift, sure strokes, Attenborough makes the necessary points about Gandhi's background and personality. A bit vainglorious, full of the commitment of youth, this is also a man with a sense of humour.
People are attracted to him because he is not afraid to live the ideals he teaches. The bantering between him and his friend, white clergyman Charles Andrews (Ian Charleson), remains light and witty even during an encounter with some street bullies.
Gandhi soon discovers that his words have the power to move people, and is careful to choose them responsibly. "In this cause I am prepared to die," he tells a crowd that is on the edge of violence, "but there is no cause in which I am prepared to kill."
To tell Gandhi's story — an historical epic that includes the freeing of India from British colonial rule — Attenborough has assembled a first-rate cast, a group of performers whose authority in their roles eliminates the need for great lumps of documentary exposition.
Among the Western cast members, performers like Trevor Howard, Edward Fox, Martin Sheen and John Gielgud excel in brief, highly memorable appearances. Their assurance is matched by their Indian colleagues, actors such as Saeed Jaffrey (as Sardar Patel), Roshan Seth (as Pandit Nehru) and Rohini Hattangady (as Gandhi's wife, Kasturba), all of them commanding in substantially larger roles.
At the centre of it all is Ben Kingsley, the 39-year-old Royal Shakespeare Company veteran who dominates the screen as Gandhi. Of Anglo-Indian parentage, the British-born Kingsley brings the Mahatma to glorious life, infusing his character with warmth, humour, occasional self-doubt and an overwhelming sense of moral rectitude.
In his mouth an epigram like "an eye for an eye only ends up making the whole world blind" is both witty and profound. His claim that "I'm not a very good man —that's why I have so much tolerance for all the scoundrels in the world," is not false humility but a life philosophy.
Together, Kingsley and Attenborough show us a true revolutionary.  Their powerful, understated film moved me to tears several times. As it ended I thought about the dubious "achievements" of so many other revolutionary philosophers.
I thought about the Marxist-Leninists who built the gulags, the Hitlerian fascists who administered the death camps, Maoists massacring in the name of cultural revolution, and all the tinpot terrorists who revere murder because they perfume their crimes in the "correct" rhetoric of national liberation.
Eliminate all the bloody-minded messiahs of mass murder, and Gandhi remains, the single human revolutionary of this century. He was real, and so were his achievements.
Gandhi, the motion picture, is a wonderful reminder of him and of the challenge he offers to his fellow men.

Afterword: My enthusiasm for Attenborough's epic was matched by the motion picture Academy members who showered Gandhi with a respectable 11 nominations, then followed through with eight Oscar wins, including best picture, actor (Ben Kingsley) and director. At the time, I believed in the power of movies to be a force for good in the world. Attenborough seemed to share that belief, and his filmography includes one other major example of socially responsible cinema, 1987's Cry Freedom. Both movies are examples of biographical filmmaking, and Attenborough returned to the genre throughout his career, telling the stories of Young Winston Churchill in 1972, and actor Charlie Chaplin in 1992.

See also: While Attenborough used Gandhi's assassination as the starting point for the story of a great man's life, many other filmmakers who make movies about politically motivated murder focus on the men who kill. Such is the case with films about the November 22, 1963 death of John F. Kennedy, a list that includes Executive Action (1973), Flashpoint (1984), JFK (1991), Ruby (1992), and Killing Kennedy (2013).