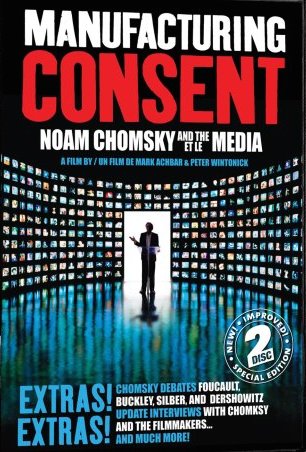 Recipient of an Honourable Mention at 1992’s Vancouver International Film Festival, Manufacturing Consent: Noam Chomsky and the Media continues to be available on DVD.

Gentleman of the jury


And then the Sheriff called to say the trial, scheduled to begin today (October 16, 2017), was cancelled and I was excused my duty to the B.C. court system. There'd been no cancellation in 1992, the year I chaired the Vancouver International Film Festival’s first annual NFB Awards Jury.

THE MONEY APPEARED AT the last minute.
"The National Film Board of Canada Awards" were noted in the [1992] Vancouver International Film Festival's program book on the Late Additions page. In recognition of the importance of non-fiction filmmaking, the federal movie producer was offering $1,000 for the "Best Documentary Feature," $1,000 for the "Best Documentary Short" and $500 for the "Best Animated Film."
Festival director Alan Franey called to tell me about it on September 1.
He asked if I would consider serving as chairman of the awards jury.
I certainly had to agree that documentaries are important. Indeed, their influence is increasingly felt in mass market commercial features.
In recent months, we've seen feature filmmakers as different as Oliver (JFK) Stone and Woody (Husbands and Wives) Allen use documentary techniques to tell their stories. Tim Robbins's powerful directorial debut feature Bob Roberts is another "mock doc."
I had to admit that it would give me an excuse — indeed, a responsibility — to see that part of the festival program that most appealed to me.
There were five of us around the table, including Knowledge Network program manager Megan Carvell-Davis, Playback Magazine columnist Joanne Morgan, BCTV news editor Russell Stevens and VIFF Canadian Images Series programmer Alison Vermee.
Thank Sony for videotape! Between Sept. 15, the afternoon of our first meeting, and Decision Day, Oct. 10, each of us had to view more than 40 hours of material.
And, even though most of it was available on cassette, the NFB's Al Parsons still had to co-ordinate about seven hours of special screenings in various locations around town.
When all else failed, we attended regular festival showings along with everyone else.
With few exceptions, the competition was world-class, with one fascinating, thoroughly professional film following another. Intense, committed perspectives on the Gulf War shared the bill with films chronicling personal spiritual journeys.
The winners?
The most discussed film on Decision Day was the epic-length Manufacturing Consent: Noam Chomsky and the Media. In the end, directors Mark Achbar and Peter Wintonick were voted an Honourable Mention for their stimulating, innovative profile of "the most important intellectual alive."
Vancouver artist Carol Halstead was our choice for the animated fim award for her wonderfully intimate cartoon autobiography Why?
Ontario director Norma Bailey's Women in the Shadows, a compelling examination of one woman's search for her Métis roots, was judged best short.
Australians Robin Anderson and Bob Connolly took the best feature award for Black Harvest, their sharply observed report on cultural conflict in Papua New Guinea.

The above is a restored version of a Province report by Michael Walsh originally published in 1992. For additional information on this archived material, please visit my FAQ.

Afterword: Although sponsorship has changed over the years, documentary films continue to receive awards at the Vancouver International Film Festival. The 2017 prize, $15,000 presented by the Rogers Group of Funds, was announced on October 7. The three-member jury — filmmaker Ann Marie Fleming, English professor Janice Morris and animator Jeff Chiba Stearns — choose writer-director Charles Officer’s NFB feature Unarmed Verses, the story of a poor black Toronto community’s dislocation by redevelopment, as the year's Best Canadian Documentary. In addition, there was a “Special Mention” honouring Shut Up and Say Something, a B.C. Knowledge Network production by director Melanie Wood, that profiles spoken-word poet Shane Koyczan.
Although I wasn’t in the room, I’m willing to bet that the 2017 jurors were divided on which one of those films was the year’s best. That certainly was the case in 1992. In the absence of  a critical consensus — both Manufacturing Consent and Black Harvest had strong advocates — and with only one prize to award, we fell back upon the cordial compromise of an "honourable mention." I recalled those deliberations during another jury selection process that took place 11 days ago (October 5) at the Vancouver Courthouse. Deemed acceptable by the lawyers for the Crown and the Defence, I was one of 12 citizens — four male and eight female — empanelled to hear a criminal case in the Supreme Court of British Columbia beginning today.
Except it didn’t. And now I’ll never have the opportunity to tell my fellow jurors about the highlight of my short-lived stage career. It was in the autumn of 1959, and I played the conciliatory Foreman of the jury in a high school production of Twelve Angry Men. I don’t recall being mentioned in any of the reviews (or even if there were reviews), but there was a beer bash after the final performance. During the evening someone said that I’d reminded them of Martin Balsam, the actor who’d played the role in the 1957 movie. I decided that it couldn’t get any better than that, and I haven’t acted since.