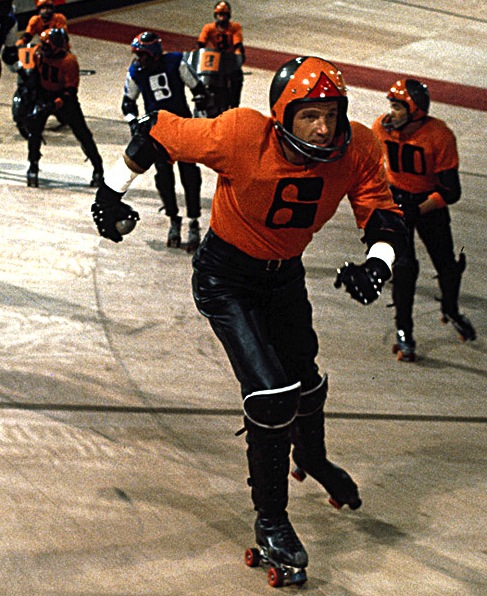 He shoots! He scores!


Its vision of tomorrow is all too true today


During the past week, the news has been dominated by reports of tragic events in Eastern Europe and the Middle East. On Thursday (July 17), a Malaysian airliner was shot down over Ukraine, killing 298 passengers and crew. On the same day, Israel launched a ground invasion of Gaza, after 11 days of air attacks that had already claimed 257 Palestinian lives. What, I wondered, does gentleman and storyteller Norman Jewison make of all this? Although the news media do not seek out veteran filmmakers for their opinions on current events, the director of such hit films as 1966's The Russians Are Coming, The Russians Are Coming (a glasnost comedy made in the depths of the Cold War) and 1973's Jesus Christ Superstar (shot on location in Israel with the co-operation of Israel's military), has the relevant experience to make his thoughts on today's headlines worth considering. Also worth remembering is that it was Jewison, born on this day (July 21) in 1926, who was responsible for one of the most thought-provoking science-fiction films of them all. Made in 1975, but set in a dystopic 2018, it is the story of a world ruled by corporations, in which the masses, convinced that individual effort is futile, are mad for Rollerball.

Tuesday, July 15, 1975.
ROLLERBALL. Written by William Harrison. Based on his 1973 short story Roller Ball Murder. Music by Andre Previn. Produced and directed by Norman Jewison. Running time: 129 minutes. Restricted entertainment with the B.C. Classifier's warning: very violent throughout. A SINGLE LINE, ALMOST lost is the stereophonic confusion of  arena noise, motorcycle engines, skate clatter and cheering fans, sums up Rollerball.
"He shoots . . . HE SCORES!"
Rollerball — brutal and brutalizing 21st century sport. Rollerball — played on a steeply banked track, seven men to a side, three of them astride the top Honda CB 125 motorcycle. Rollerball —  object of the game: to score goals.
The era of nation states has passed. Business corporations rule the world, and every major city is a company town. For vicarious excitement, every city has its  rollerball team. Tonight, it's Houston versus Madrid in Houston.
But . . ."he shoots . . . he scores!?"
Rollerball started out as Roller Ball Murder, a short story in the September 1973 issue of Esqulre magazine. Author William Harrison claims the idea came to him after seeing a particularly vicious game of basketball in Fayetteville, Arkansas.
Forget Roller Ball Murder. It's the sort of short story that makes you think that the author signed up for a creative writing course, when what he really needed was remedial reading. The only thing interesting about it is the fact that it was read by Norman Jewison.
Jewison, the sharp and sensitive filmmaker who brought Jesus Christ Superstar  to the screen two years ago, is living proof that you can take the director of of his country, but you can't take the country out of the director. Born practically in the shadow of Maple Leaf Gardens, Jewison grew up in Toronto, one-time hockey capital of the world, and home of the only authentic Hockey Hall of Fame.
He learned the production business in CBC-TV's Toronto studios, cheek by jowl with the production team that originated that perennial best-seller, Hockey Night In Canada. In the making of Rollerball, a chilling update on the national sport, his major influences seem to have been Marshall McLuhan and Frank Mahovolich.
"He shoots . . . HE SCORES!"
Jewison scored with 1967's In the Heat of the Night, with Fiddler on the Roof (1971), with Superstar, and now with Rollerball. A multi-layered entertainment package, it has crowds roaring on the soundtrack and cheering in the Stanley Theatre balcony.
Manipulative, and a fable on the dangers of manipulation, it is a precise, polished future fantasy. It offers a perceptive cinematic synthesis of two of the major themes running through the films of the 1970s — the search for individual identity in a corporate state, and an examination of modern society's violent roots.
More to the point, it offers mayhem; flesh-tearing, bone-shattering, depersonalized violence. It offers . . . blood!
Jewison sets it all out in the first scene. The curtains part on the swelling notes of Bach's Toccata and Fugue in D Minor. On screen, in the dim shadows of work lights, we see an arena crew setting up for some sort of show.
Reaction No. 1 is for the rock fans. The roadies are getting ready for a concert — a concert of carnage.
Reaction No. 2 is for contemporary film fans. Jewison nods solemnly towards Stanley Kubrick and his penchant for plundering the classics to counterpoint the messages contained in such over-rated epics as 2001: A Space Odyssey (1968) and A Clockwork Orange (1971).
Reaction No. 3 is for the classic movie fans. Walt Disney's Fantasia (1940)  opens with similar pre-concert preparations. First item on the Fantasia program: Bach's Toccata and Fugue.
It also represents full disclosure from the director. Rollerball contains mayhem, messages and much artistic whimsy. Extract what you will, but keep in mind that cinematic science fiction is, by its very nature, a superficial medium designed for little more than entertainment: the transmission of the obvious to the disingenuous.
Jewison drives the point home when he introduces Ralph Richardson as the custodian of Zero, the ultimate computer. A little dotty, the elderly programmer is not at all awed by his charge. Zero, like any truculent vending machine, takes its share of angry kicks.
Jewison's hero is Jonathan E (James Caan), rollerball's indestructible superstar, and the owner of the most famous face in a faceless world. For reasons they won't explain, the world's aging elite perceives his popularity as a threat. He is asked to resign.
Confused, Jonathan refuses. He embarrasses his boss, Energy Corporation chairman Mr. Bartholomew (John Houseman), by continuing to show up for work.
As in any multi-national, there is a pretence of civilization. Jonathan can't be fired, so he is harassed, in this case by rule changes that make the game progressively more dangerous.
As a director, Jewison faced the challenge of first creating a game — Harrison's original just wouldn't play as written — making fans out of his  audience, and then outraging them by changing its rules.
In this, as in the entire film, he succeeds brilliantly.  He  creates a game that is logical and exciting, a combination of hockey, roller derby and guerrilla war. Given half a chance in today's world, it could catch on.
*     *     *
FOR IMMEDIATE RELEASE — The following paragraph is from a 1974 press release promoting Rollerball. It is quoted without comment.
"Producer-director Norman Jewison has completed principal photography on his new film Rollerball . . . (the) futuristic drama of a world managed by multi-national super corporations during the first quarter of the 21st century. The film will be released by United Artists, an entertainment service of Transamerica Corporation."

Afterword: There will be much more to be said about Norman Jewison in future Reeling Back postings. Now, though, it should be noted that any popular movie with a strong social message is eventually remade in a version that deliberately reduces its truths to trivia. So it was that in 2002, director John McTiernan (having previously trashed Jewison's 1968 feature, The Thomas Crown Affair, with his own listless 1999 remake) filmed a dilute version of Rollerball. Relocated to Central Asia and stripped of its corporate critique, it became one more tale of extreme sport set in a present-day third-world country, where life is cheap and the rock music is really, really loud.