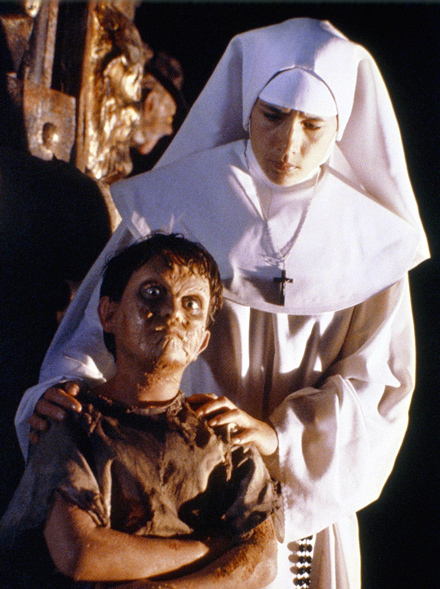 Her kid’s a little horror


The Hallowe’en party’s at 13 Elm Street


The 2017 Hallowe’en season officially begins today (October 13), with the opening of Happy Death Day, a shock-thriller that uses the popular Groundhog Day time-loop trope. Though considered the least lucky date on any year’s calendar, Friday the 13th is much favoured by Hollywood for the release of horror movies. We’ll probably never know what clever publicist first made the connection, but Reeling Back can tell you that four of the 12 films in the Friday the 13th film franchise opened on the apropos date, including 1984’s Friday the 13th: The Final Chapter, Friday the 13th Part VII: The New Blood (1988), Jason Goes to Hell: The Final Friday (1993) and the 2009 remake intended to reboot the series, Friday the 13th. Inspired by the Ur-slasher film — director John Carpenter’s 1978 feature Halloween — Sean S. Cunningham’s Friday the 13th (1980) offered Jason Voorhees as the new Michael Meyers (featured in nine films to date), an unkillable killer who targets teens. The era of horror film franchising was well underway when director Wes Craven’s creation Freddy Krueger arrived on the scene. The evil presence in 1984’s A Nightmare on Elm Street, he began stalking teens in their dreams seven months after Jason’s Final Chapter. His sixth feature (of nine), 1991’s Freddy’s Dead: The Final Nightmare, premiered on a Friday the 13th. Today, we are recalling the 1989 feature in which Vancouver actress Beatrice Boepple played Freddy’s mom, A Nightmare on Elm Street 5: The Dream Child.

A NIGHTMARE ON ELM STREET 5: THE DREAM CHILD. Written by Leslie Bohem. Based on characters created by Wes Craven. Music by Jay Ferguson. Directed by Stephen Hopkins. Running time: 89 minutes. Restricted entertainment with the warning: some gory violence. IT'S NO COMPETITION. Down on Elm Street, they're busting a gut — literally — to maintain the momentum of the screen's most imaginative scream series.
Over on Crystal Lake, they're just going through the motions. Indeed, the only interesting thing about Friday the 13th Part VIII - Jason Takes Manhattan is the fact that it was filmed in Vancouver.
A dim, entirely routine rerun of the clomp-and-kill formula, Part VIII offers filmgoers the dubious pleasure of spotting local back alleys and seeing a graffiti-scarred SkyTrain doubling for the New York subway. Much of the mayhem takes place aboard the steamer SS Lazarus, scenes shot aboard the derelict Prince George, a B.C.-built passenger liner once part of the Canadian National Steamship fleet.
Writer-director Rob Hedden’s story has the homicidal Jason (Kane Hodder) rising from his watery grave to join the grad class of Lakeview High on their voyage down the coast to New York City. The first of the franchise features not shot in the U.S., it provides a big screen credit for at least seven Canadian actors.
The group includes Todd Shaffer (as Jim Miller, the teen who unwittingly reawakens Jason), Sharlene Martin,  Martin Cummins, Gordon Currie and  Saffron Henderson (playing cruise ship passengers Tamara Mason, Wayne Webber, Miles Wolfe and J.J. Jarrett) with Alex Diakun as a deckhand and Michael Benyaer as Big Apple gangbanger JoJo.
The year is 2002, and Jason is now 42. Though showing some middle-age spread, he still manages to dispatch 17 hapless citizens, including all of the above-named Canadians. For those keeping score, two additional violent deaths bring the film’s total to 19: five women and 14 men.
By comparison, Freddy Krueger (Robert Englund) seems positively pleasant on this outing. A mere three characters die in A Nightmare on Elm Street 5: The Dream Child.
Unlike the Crystal Lake crowd, Freddy's handlers enthusiastically explore the fright fantasy possibilities built into his dreamworld habitat. In the process, they touch on a real issue — teen pregnancy.
Alice Johnson (Lisa Wilcox), the schoolgirl who defeated Freddy in 1988’s Elm Street 4, is now with child by her boyfriend, Dan Jordan (Danny Hassel). The conception is a blessed event for the much weakened "child of 100 maniacs."
Babies, you see, dream in the womb. Before Alice is even aware of her condition, Freddy is using her unborn child as a route back into her life.
Building on what's been revealed about Freddy in previous pictures, screenwriter Leslie Bohem makes a major character out of the undead villain's mother, raped nun Amanda Krueger (Vancouver’s Beatrice Boepple). The film opens with mom-to-be Alice meeting the mom-that-was in the abandoned ruins of the Springwood Asylum.
Under the direction of Jamaican-born Australian Stephen Hopkins, the emphasis is on eye-dazzling special effects. Never mind that a small town in middle America seems to have an empty looney bin that looks like Dracula's castle.
The object is to bring bad dreams to life and considerable technical expertise is used to do just that. A competently crafted shock feature, it puts the pro-choice option in a new light.

Afterword: The daughter of Asian art historian Joan Stanley-Baker, Vermont-born Beatrice Boepple grew up in Japan. When she was 13, her mother relocated to Canada to become the  inaugural Curator of the Art Gallery of Greater Victoria. Boepple, a 1984 University of Victoria Fine Arts graduate, joined the B.C. acting community, where she worked on stage and in radio and television productions. Before making the trip to Los Angles to play Amanda Krueger, Boepple had four Vancouver-made feature film credits, including 1987’s Stakeout, Shoot to Kill  (1988), Matinee  and Quarantine (both 1989).
Her time in Hollywood was less rewarding, and in the early 1990s Boepple made a trip to India. There she took up yoga while living in an ashram and doing volunteer work in a mobile hospital. After two years she returned to the U.S., where she spent four years working as a corporate advertising director on New York’s Wall Street. In the late 1990s, she married, opened a yoga studio and started a family. We don’t know for sure if Boepple has ever been back to British Columbia, but we do remember a second visit by Jason Voorhees. The hockey-masked murderer from the Friday the 13th franchise was back in town for a faceoff with his fellow fiend, Freddy vs. Jason. The 2003 crossover feature was directed on Vancouver locations by Hong Kong action expert Ronny Yu, and it was the last entry in each of the franchises prior to their respective reboots (in 2009 for Friday the 13th; 2010 for Nightmare on Elm Street).