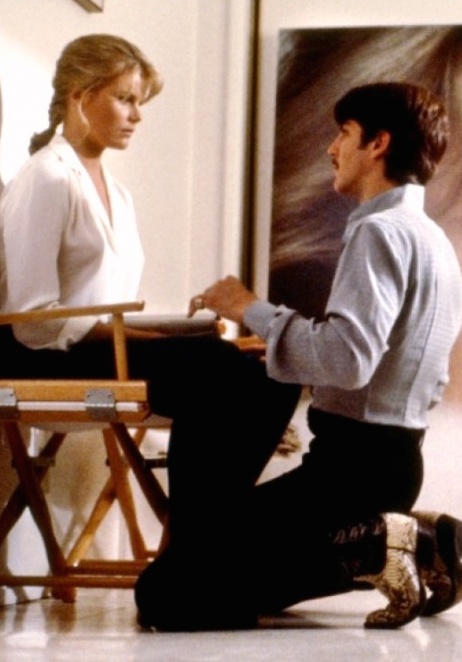 In death they did part


Every man’s fantasy a true-life tragedy


It’s been said that our show business celebrities, like the gods of myth, are worshipped because their larger-than-life achievements inspire us in our own lives. It follows, then, that when a beloved performer dies, we all share the loss. The feeling is even more intense when a star is young, and most intense when death comes violently. Ruled a suicide, Marilyn Monroe’s 1962 death is remembered to this day because many believe it to have been a murder. There was not doubt about the 1969 murder of actress Sharon Tate, who was one of five persons stabbed to death by the unhinged followers of Charles Manson. In 1978, film star Sal Mineo died after being stabbed outside his Los Angeles home, while TV star Bob Crane was beaten to death in his Arizona home in 1978. John Lennon was shot in New York in 1980 by an insane fan, actress Dominique Dunne was bludgeoned by an ex-lover in front of her L.A. house in 1982 and Motown musician Marvin Gaye was shot by his father during a domestic dispute at his L.A. home in 1984. Hip-hop artist Tupac Shakur died in 1996, the target of a Las Vegas drive-by shooting, while TV comedian Phil Hartman was shot by his wife in their Los Angeles bedroom in 1998. The violent celebrity death felt most deeply in Vancouver occurred on this day (August 14) in 1980. Dorothy Stratten, a locally-born actress on the verge of Hollywood stardom, was murdered in Los Angeles by her husband, Paul Snider. A shocking tale of love gone wrong, it was the subject of writer-director Bob Fosse’s 1983 feature, Star 80.

Tuesday, November 15, 1983.
STAR 80. Based in part on Teresa Carpenter’s 1980 Village Voice feature article Death of a Playmate. Music by Ralph Burns. Written and directed by Bob Fosse. Running time: 103  minutes. Restricted entertainment with the B.C. Classifier’s warning: frequent very coarse language and nudity; occasional gory violence. HER PICTURE IS EVERYWHERE. Dorothy (Mariel Hemingway) at the Dairy Queen. Dorothy's Playboy test photos. Dorothy beside him at their wedding.
He did it, him: Paul Snider (Eric Roberts). He found her, formed her and made it possible for an awkward East Vancouver girl to become 1980’s Playmate of the Year.
She is his Star 80, and now they are trying to steal it all away.
“Paul," his friend Geb (David Clennon) advises, “you’re going to make yourself loony. You’ve got to realize that Dorothy is every man’s fantasy.”
The facts: On Thursday, August 14, 1980, Dr. Steven Cushner found the bodies of Paul Snider and his estranged wife Dorothy Stratten in the bedroom of Snider’s apartment in West Los Angeles, California.
The coronor’s office ruled her death a murder and his “a questionable suicide — possible homicide.”
Every man’s fantasy became a sudden, specific tragedy. Reporters, rushing to fill in the details, found that they were dealing with a ready-made movie melodrama, complete with a clandestine Hollywood love affair, private detectives and parties at the Playboy Mansion.
Facts involving public personalities can be difficult to deal with dramatically. The still-living — men like Playboy magazine publisher Hugh Hefner and filmmaker Peter Bogdanovich — know their way around lawyers and lawsuits.
No amateur himself, writer-director Bob Fosse saw the real-life story as a departure point for an exploration of some modern mythology. Star 80 is the New Yorker’s answer to the familiar question “what sort of man reads Playboy?”
Loosely based on Village Voice reporter Teresa Carpenter’s 1980 Death of a Playmate series, Fosse’s film focuses on Snider, portrayed as an ambitious, amoral hustler who dreams of entering Playboy’s alluring “world within a world.” All his life has been a preparation for the supreme moment when he will stand in front of the great “Hef” (Cliff Robertson) in the Mansion and quote the Playboy Philosophy back to its author.
Dorothy is his entrée, his ticket to the party. She is, in Hef’s words, “wholesome, fresh and naïve,” qualities that make men want to take her in hand and make her a star.
Hef, recognizing in Snider “the personality of a pimp,” is offended by the little man. He banishes him, while keeping his gift, his Dorothy.
“What did I do wrong?” an anguished Snider wails into his mirror.
Mansion regular Aram Nicholas (Roger Rees), a Hollywood filmmaker, also responds to Dorothy’s special quality. He casts her in his movie, takes her into his bed and advises her to leave Paul.
Distraught, and slipping into madness, Snider goes out and buys a gun.
As a filmmaker, Fosse’s artistic concerns have remained consistent throughout his career. Sweet Charity (1969), Cabaret (1972), Lenny (1974) and All That Jazz (1979) are all about people in the business of selling themselves — their creativity, their performing talent or their bodies.
In Star 80, he shows us a small-town flesh peddler who steps out of his league and into a quagmire of conflicting emotions and ambitions. Returning to the docudrama style of Lenny, Fosse presents his story as a mixture of after-the-fact interviews and flashbacks, all built around Paul's confrontation with Dorothy in their death room.
It climaxes with the first shotgun blast. Rather than linger on its effect, Fosse cuts away to views of Hefner working at a table of colour slides, to shots of Dorothy’s rapidly-developing little sister Eileen (Lisa Gordon) and to Nicholas, bent over his movie editing machine.  Then it’s back to the death scene and to the murderer, snarling as he turns the gun on himself.
“You won’t forget Paul Snider!” Not likely.


*    *    *
LIKE MARILYN MONROE, WHOSE name still evokes strong emotions more than 20 years after her [1962] death, Dorothy Stratten has come to symbolize the tragedy of her times. So far, the story of the murdered Playmate, born in Vancouver in 1960 as Dorothy Ruth Hoogstraten, has inspired two feature films.
In 1981, Jamie Lee Curtis played Stratten in the NBC-TV movie Death of a Centrefold: The Dorothy Stratten Story. First broadcast on the evening of November 1, 1981, it was written by Donald Stewart and directed by Gabrielle Beaumont. Bruce Weitz appeared as Paul Snider.
Just opened [1983], is writer-director Bob Fosse’s theatrical feature Star 80. Inspired by Village Voice reporter Teresa Carpenter’s syndicated series Death of a Playmate (run in the Province Magazine on November 30, December 7 and 14, 1980), it stars Mariel Hemingway and Eric Roberts. Unlike the made-for-TV feature, Star 80’s Vancouver scenes were actually shot here.
In the two years before her death, Dorothy Stratten was on her way to becoming a recognized screen presence. She appeared in five feature films, a list that includes:
◼︎    Americathon, a 1979 satirical comedy about a telethon set up to save a bankrupt America that was co-written and directed by Neil Israel for release by United Artists. In her feature film debut Stratten had a bit part playing the statuesque beauty who escorts Oklahoma Daredevil Roy Budnitz (Meat Loaf) off stage during the telethon.
◼︎    Skatetown, U.S.A., a 1979 roller-disco musical co-written, produced and directed by William A. Levey for Columbia Pictures. Stratten’s first speaking role, it features her on skates ordering pizza at the roller-disco rink’s snack bar.
◼︎    Autumn Born, an independent sex-exploitation film, co-written, produced, photographed, co-edited and directed by Vancouver-based Lloyd Simandl. Shot in Winnipeg in 1979, it was Stratten’s first starring role. As Tara Dawson, she is a frequently-undressed heiress who is kidnapped and subjected to considerable physical abuse by the agents of her scheming uncle Grant (Nate MacIntosh). Not seen theatrically, it was released directly to the home video market in 1983.
◼︎    Galaxina,  a 1981 science-fiction comedy, written and directed by independent Hollywood filmmaker William Sachs. Stratten has the title role, playing an attractively engineered robotrix who steals away the heart of Sgt. Thor (Stephen Macht), a handsome space cop.
◼︎    They All Laughed, a 1981 romantic comedy, written and directed by Dorothy’s paramour Peter Bogdanovich. In this La Ronde-like farce, she plays Dolores Martin, a wayward wife who leaves her husband to find happiness with private detective Charles Rutledge (John Ritter). Shelved by 20th Century-Fox, it was released independently in 1981 by director Bogdanovich, who discussed the making of the film with me in a 1981 interview.
Dorothy Stratten’s television work included a guest appearance in the 1979 ABC-TV late-night special Playboy’s Roller Disco and Pajama Party. In it, she’s featured in a comedy skit opposite actor James Caan.
Stratten made two 1980 guest appearances on NBC-TVs The Johnny Carson Show. She also had a bit part in a 1979 episode of ABC-TV’s Fantasy Island series titled The Victim/The Mermaid.
In Cruise Ship to the Stars, a 1979 episode of NBC-TV’s Buck Rogers in the 25th Century, she plays the genetically perfect Miss Cosmos. It was Stratten’s most prominent television role, and her character is at the centre of the episode’s action.
In that 1981 interview, Peter Bogdanovich told me that he was working on his “memoirs of my time and experiences with Dorothy.” His book, tentatively titled D.R.S. - 1960-1980, was scheduled for publication in September of 1982 by New York’s William Morrow and Company. To date [1983], the Bogdanovich book has not appeared.

The above is a restored version of a Province review and feature article by Michael Walsh originally published in 1983. For additional information on this archived material, please visit my FAQ.

Afterword: Peter Bogdanovich’s memoir, titled The Killing of the Unicorn: Dorothy Stratten 1960-1980, was published in August of 1984. Director Bob Fosse’s feature film Star 80 was released in late 1983, after my 1981 interview with Bogdanovich, but before the appearance of the book. Fosse, with no wish to attract lawsuits, changed a number of the character names. Welsh actor Robert Rees’s innocuous “Aram Nicholas” is, of course, based on Peter Bogdanovich. Actress Lisa Gordon’s “Eileen Stratten” is the film’s version of Dorothy’s kid sister Louise, a young woman with whom Bogdanovich was known to have a special relationship when Star 80 went into production. The picture’s screenplay went so far as to fictionalize the names of Dorothy's previous feature films. Instead of Skatetown, U.S.A. and Autumn Born we hear the titles “Wednesday’s Child” and “Ball Bearings.” Eric Roberts’s Paul Snider character refers to Galaxina, but only as the “sci-fi film” (in which) she plays a robot.” Her last movie, the Bogdanovich comedy They All Laughed, is called “Tinsel Town".
A detail that Fosse did not fictionalize was the unhappy couple’s hometown. Both Paul Snider and Dorothy Stratten were born and raised in Vancouver, and the production company spent four weeks filming in B.C. in the summer of 1982. Among the locations used was the Dairy Queen in the 2100 block of East Hastings Street, where Snider and Stratten met for the first time. Although Fosse’s film tells their story, he does it from the point of view of a director who identified with Snider, an obsessive hockey fan and follower of publisher Hugh Hefner’s hedonistic Playboy philosophy. Recalling Fosse’s movie in a 2015 blog, Connecticut Post entertainment columnist Joe Meyers says the director told actor Eric Roberts that “You’re playing me if I wasn’t successful.” Given Fosse’s famously priapic self-portrait in his 1979 musical All That Jazz, the story seem credible. In the years since Star 80, feminists have pointed out that Stratten, as portrayed by Hemingway under Fosse’s direction, lacks agency. Perhaps, after more than a quarter century, an artist will revisit her story in a way that shows us Dorothy the person, rather than every man’s fantasy and one particular man’s victim.