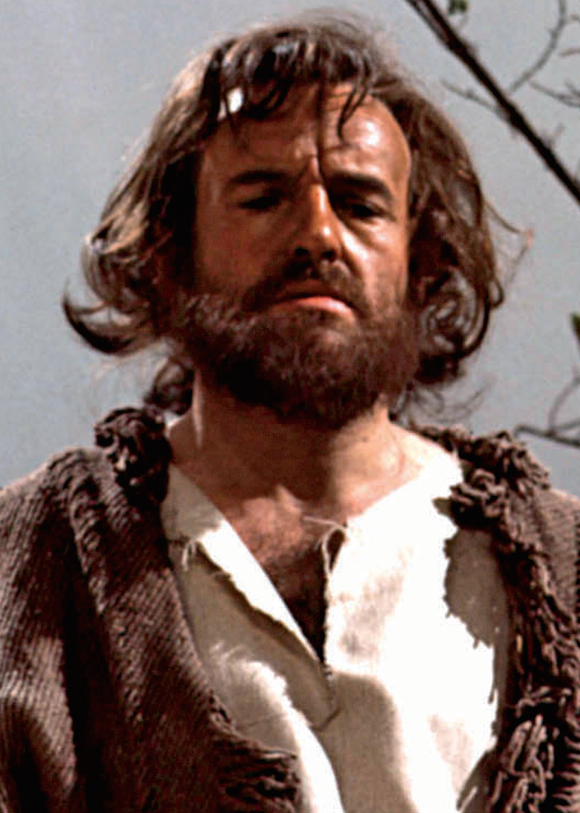 Colin Blakey offered audiences a Christ capable of impatience and even anger in the 1969 BBC-TV drama Son of Man.


It would be irreverent to point out that 2018’s Easter Sunday (April 1) coincides with this year’s celebration of All Fools’ Day. Instead, Reeling Back will consider the various images of Jesus on screen that were a part of the University of B.C.’s 1974 Festival of Christianity and the Arts.

JESUS CHRIST: HE IS CALLED Lord, Saviour, Redeemer, the Son of Man, the Prince of Peace and King of Kings.
The founder and focal point of 2,000 years of Christianity, he remains a man of mystery. A teacher who personally wrote nothing down, his teachings are known to us only through the reports of his followers.
His words are hearsay; his deeds, many of a miraculous nature, are chronicled only in the strongly-biased works of zealots promulgating and promoting a new religion.
It’s little wonder, then, that we have no single, clear image of this Jesus. For as long as there has been a Christian church, the search for Christ has been a central theme.
It's a theme central to much art as well as to theology, a fact reflected for the next two weeks [February, 1974] in the University of B.C.’s ecumenically-minded Festival of Christianity and the Arts. Though primarily concerned with the solitary artist — among the guest speakers are painter Alex Colville and novelist Rudy Weibe — the conference will also consider reflections of Christ in the 20th century's most significant group art form, the motion picture.
During the 13-day festival, four feature films will be screened and discussed by panels consisting of students, faculty, chaplains and artists. In developing their program, festival organizers had a surprisingly large number of films to choose among.
Passion plays were among the first subjects ever recorded on film. As early as 1897, a pair of New York entrepreneurs were passing off a made-in-Manhattan movie as the famous Oberammergau Passion Play.
These pioneer filmmakers were searching not so much for the true nature of Jesus as for a few quick bucks. Soon, just about everyone was doing it. Between 1908 and 1909 alone, the following films were put into release: Jerusalem in the Time of Christ; The Kiss of Judas; The Star of Bethlehem; The Birth of Jesus; and The Birth of Our Saviour.
Despite his obvious popularity as a "property," Christ did not fare particularly well on the movie screen. The depth of the film community's vision was reflected ironically in the names of some of the actors assigned the role: R. Henderson Bland (in 1912’s From the Manger to the Cross) and Howard Gaye (in 1916's Intolerance).
Rather than risk offending anyone,  the moviemakers turned one of the prime movers of human history into a laundered, slightly luminescent plaster statue. Showman Cecil B. DeMille carried outright religiosity to its most ridiculous extreme.
During the making of his 1927 King of Kings, great publicity was given to the story that DeMille had a minister, a priest and a rabbi on the set at all times to insure "authenticity.” His Christ, actor H.B. Warner, was kept in a kind of solitary confinement during filming, lest the evil in the world around him pollute his performance.
It was all nonsense, of course. The finished film was typical of DeMille — excessive, suggestive and superficially reverent. It bore slight resemblance to either the substance or the spirit of the Scriptures.
Since the beginning of the sound era [1927], filmmakers have been considerably more reluctant to take on the New Testament. Between 1932, the release date of a Passion play film called Golgotha, and 1961, the release date of a second King of Kings, no major studio developed a Christ project.
Christ's appearances were confined to inspirational "guest shots." He turned up as "The Teacher” in 1935’s Last Days of Pompeii, was seen in flashback in 1951's Quo Vadis and is crucified both in Ben-Hur (1959) and The Robe (1953).
Since the 1961 King of Kings, though, filmmakers have been turning their attention to Christ Himself. This time, the search has been somewhat more profound, a fact reflected in the UBC festival’s choice of features.
First on the program, with four showings, is director David Greene's Godspell (1973), a bright and tuneful musical based primarily on the parables. Reflecting the new mood of youthful ecstasy in the Christian message, the Godspell troupe expresses its enthusiasm in song and dance.
An entirely different tone is taken in 1969’s Son of Man. Produced by the British Broadcasting Corporation as a television special, director Gareth Davies's 90-minute drama is considered by festival organizers to be something of a find.
Written by Dennis Potter, the controversial production attempts to show the human side of Jesus. Actor Colin Blakey portrays Him as a man capable of emotional response, impatience and even anger.
Offering the program's heaviest dose of “art" is Italian director Pier Paolo Pasolini's The Gospel According to St. Matthew (1965). It is a stark and serious film, full of meaningful close-ups and glowering bystanders.
The movie’s reputation is based more on its contrast with the glossy Hollywood product than on any real merit of its own. Art-conscious audiences were captivated by the idea that Pasolini, a self-proclaimed Communist, would make a movie based on a Gospel, and then dedicate it to Pope John XXIII.
The movie itself is long, lumping and literal-minded. As in most of Pasolini's films, the cast is made up of expressive-faced amateurs. Christ is portrayed as a surly fanatic.
Last on the program is American director Nicholas Ray's 1961 King of Kings. Primarily known for his action films and urban melodramas, Ray skirts the question of Christ's divinity entirely.
In this version, actor Jeffrey Hunter played Jesus, not as a miracle worker, but as a political leader caught up in a national liberation movement. Among the film's more startling inventions is an alliance between Judas and Barabbas in a kind of anti-Roman underground.
Despite his numerous screen appearances, audiences have learned very little about Christ from the movies. To a large extent, moviemakers treat Christ as if he were a mythological rather than an historical figure, moulding him to meet the needs of their own stories and screenplays.
Like Pilate, it's possible that they begin by asking "What is truth?” Sadly, most seek their answers at the box office. Truth is whatever sells.

Afterword: The last time that Easter and April Fool’s fell on the same day was in 1956. That may well have been the year I first heard the old Catholic schoolyard joke “the Pope’s cancelled Easter. They found the body.” Twenty-one years later, Canadian evangelist-turned-author Charles Templeton turned the joke into a best-selling novel. In his 1977 thriller Act of God, an archeologist confides to his old friend, a Catholic cardinal, that he’s found the body. More recently, in a 2001 movie called The Body, Antonio Banderas plays a Jesuit priest sent by the Vatican to investigate the claim of an Israeli archeologist that she's made the same faith-shaking discovery.